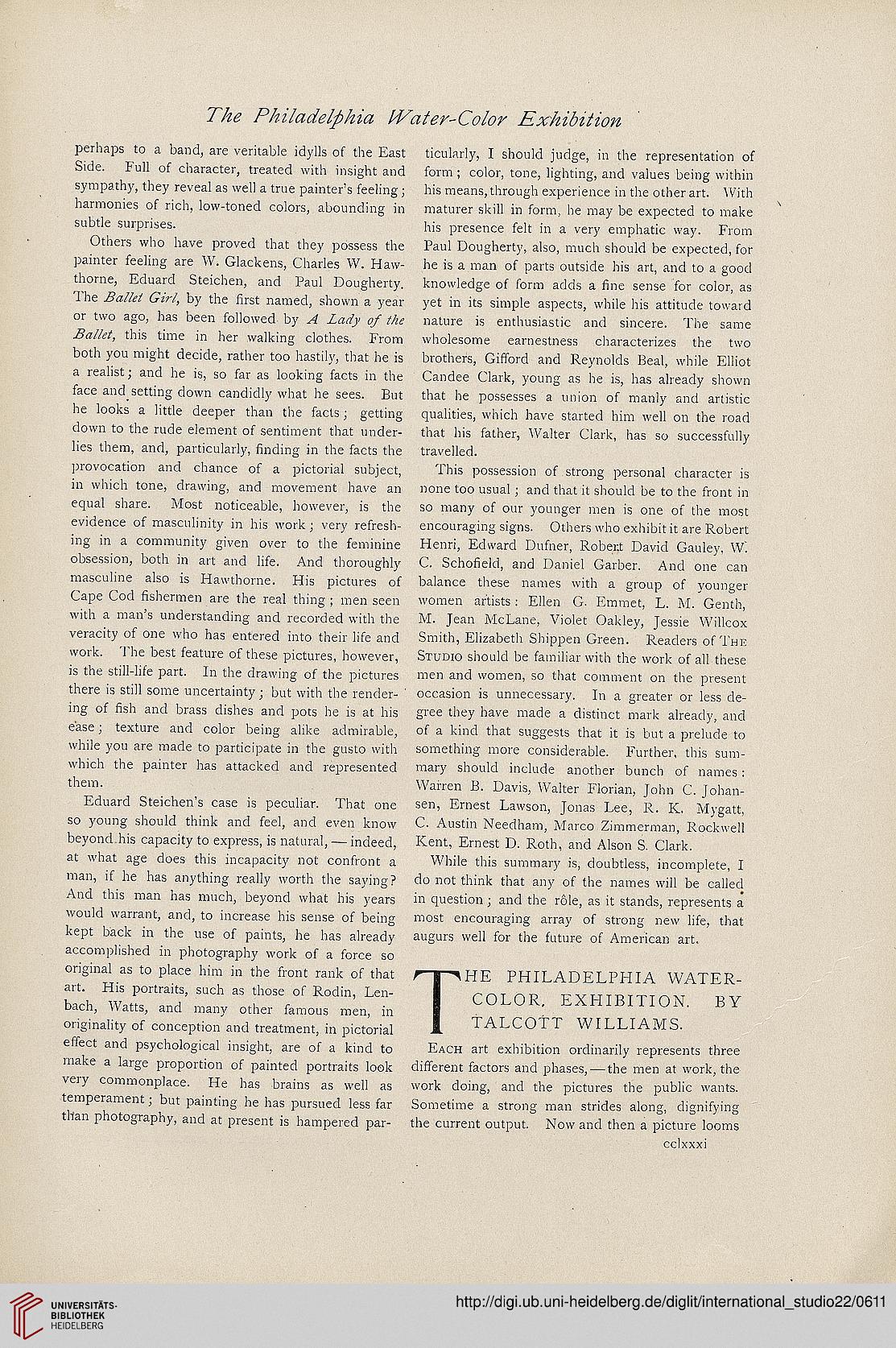 perhaps to a band, are veritable idylls of the East
Side. Full of character, treated with insight and
sympathy, they reveal as well a true painter's feeling;
harmonies of rich, low-toned colors, abounding in
subtle surprises.
Others who have proved that they possess the
painter feeling are W. Glackens, Charles W. Haw-
thorne, Eduard Steichen, and Paul Dougherty,
lire 6V7-/, by the first named, shown a year
or two ago, has been followed by H ZaZy p/*
.Frz/Z/, this time in her walking clothes. From
both you might decide, rather too hastily, that he is
a realist; and he is, so far as looking facts in the
face and setting down candidly what he sees. But
he looks a little deeper than the facts; getting
down to the rude element of sentiment that under-
lies them, and, particularly, finding in the facts the
provocation and chance of a pictorial subject,
in which tone, drawing, and movement have an
equal share. Most noticeable, however, is the
evidence of masculinity in his work ; very refresh-
ing in a community given over to the feminine
obsession, both in art and life. And thoroughly
masculine also is Hawthorne. His pictures of
Cape Cod fishermen are the real thing ; men seen
with a man's understanding and recorded with the
veracity of one who has entered into their life and
work, '['he best feature of these pictures, however,
is the still-life part. In the drawing of the pictures
there is still some uncertainty; but with the render-
ing of fish and brass dishes and pots he is at his
ease; texture and color being alike admirable,
while you are made to participate in the gusto with
which the painter has attacked and represented
them.
Eduard Steichen's case is peculiar. That one
so young should think and feel, and even know
beyond his capacity to express, is natural, — indeed,
at what age does this incapacity not confront a
man, if he has anything really worth the saying?
And this man has much, beyond what his years
would warrant, and, to increase his sense of being
kept back in the use of paints, he has already
accomplished in photography work of a force so
original as to place him in the front rank of that
art. His portraits, such as those of Rodin, Len-
bach, Watts, and many other famous men, in
originality of conception and treatment, in pictorial
effect and psychological insight, are of a kind to
make a large proportion of painted portraits look
very commonplace. He has brains as well as
temperament; but painting he has pursued less far
than photography, and at present is hampered par-

ticularly, I should judge, in the representation of
form ; color, tone, lighting, and values being within
his means, through experience in the other art. With
maturer skill in form, he may be expected to make
his presence felt in a very emphatic way. From
Paul Dougherty, also, much should be expected, for
he is a man of parts outside his art, and to a good
knowledge of form adds a fine sense for color, as
yet in its simple aspects, while his attitude toward
nature is enthusiastic and sincere. The same
wholesome earnestness characterizes the two
brothers, Gifford and Reynolds Beal, while Elliot
Candee Clark, young as he is, has already shown
that he possesses a union of manly and artistic
qualities, which have started him well on the road
that his father, Walter Clark, has so successfully
travelled.
This possession of strong personal character is
none too usual ; and that it should be to the front in
so many of our younger men is one of the most
encouraging signs. Others who exhibit it are Robert
Henri, Edward Dufner, Robert David Gauley, W.
C. Schofield, and Daniel Garber. And one can
balance these names with a group of younger
women artists: Ellen G. Emmet, L. M. Genth,
M. Jean McLane, Violet Oakley, Jessie Willcox
Smith, Elizabeth Shippen Green. Readers of THE
STUDto should be familiar with the work of all these
men and women, so that comment on the present
occasion is unnecessary. In a greater or less de-
gree they have made a distinct mark already, and
of a kind that suggests that it is but a prelude to
something more considerable. Further, this sum-
mary should include another bunch of names:
Warren B. Davis, Walter Florian, John C. Johan-
sen, Ernest Lawson, Jonas Lee, R. IC. Mygatt.
C. Austin Needham, Marco Zimmerman, Rockwell
Kent, Ernest D. Roth, and Alson S. Clark.
While this summary is, doubtless, incomplete, I
do not think that any of the names will be called
in question ; and the role, as it stands, represents a
most encouraging array of strong new life, that
augurs well for the future of American art.
rips HE PHILADELPHIA WATER-
COLOR. EXHIBITION. BY
J TALCOTT WILLIAMS.
EACH art exhibition ordinarily represents three
different factors and phases, — the men at work, the
work doing, and the pictures the public wants.
Sometime a strong man strides along, dignifying
the current output. Now and then a picture looms
cclxxxi