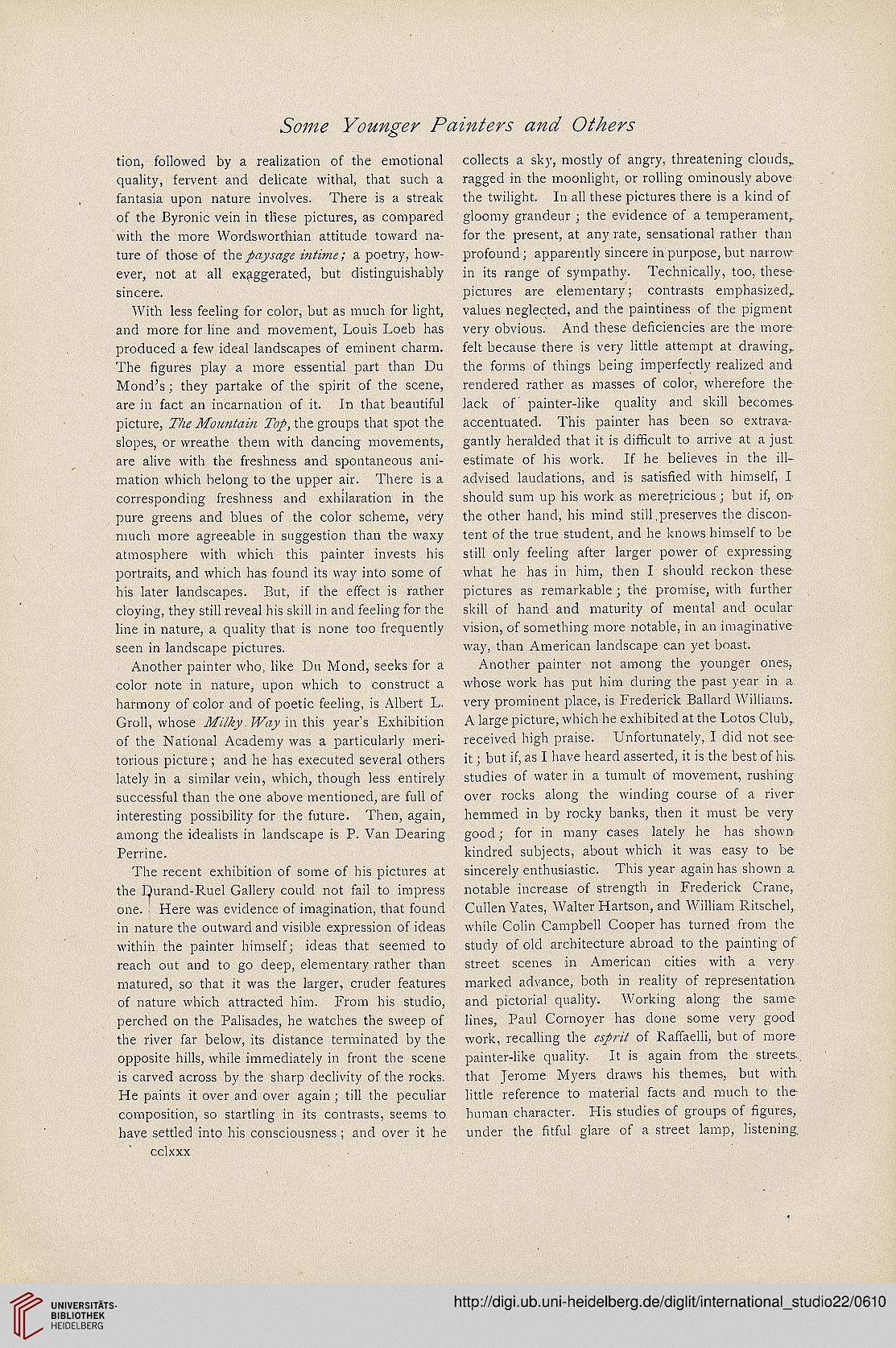 tion, followed by a realization of the emotional
quality, fervent and delicate withal, that such a
fantasia upon nature involves. There is a streak
of the Byronic vein in these pictures, as compared
with the more Wordsworthian attitude toward na-
ture of those of the M/fwzy,* a poetry, how-
ever, not at all exaggerated, but distinguishable'
sincere.
With less feeling for color, but as much for light,
and more for line and movement, Louis Loeb has
produced a few ideal landscapes of eminent charm.
The figures play a more essential part than Du
Mond's; they partake of the spirit of the scene,
are in fact an incarnation of it. In that beautiful
picture, 7Xy yWywzhzz/z the groups that spot the
slopes, or wreathe them with dancing movements,
are alive with the freshness and spontaneous ani-
mation which belong to the upper air. There is a
corresponding freshness and exhilaration in the
pure greens and blues of the color scheme, very
much more agreeable in suggestion than the waxy
atmosphere with which this painter invests his
portraits, and which has found its way into some of
his later landscapes. But, if the effect is rather
cloying, they still reveal his skill in and feeling for the
line in nature, a quality that is none too frequently
seen in landscape pictures.
Another painter who, like Du Mond, seeks for a
color note in nature, upon which to construct a
harmony of color and of poetic feeling, is Albert L.
Croll, whose A/7/Ay ffhy in this year's Exhibition
of the National Academy was a particularly meri-
torious picture; and he has executed several others
lately in a similar vein, which, though less entirely
successful than the one above mentioned, are full of
interesting possibility for the future. Then, again,
among the idealists in landscape is P. Van Dearing
Perrine.
The recent exhibition of some of his pictures at
the JJurand-Ruel Gallery could not fail to impress
one. Here was evidence of imagination, that found
in nature the outward and visible expression of ideas
within the painter himself; ideas that seemed to
reach out and to go deep, elementary rather than
matured, so that it was the larger, cruder features
of nature which attracted him. From his studio,
perched on the Palisades, he watches the sweep of
the river far below, its distance terminated by the
opposite hills, while immediately in front the scene
is carved across by the sharp declivity of the rocks.
He paints it over and over again ; till the peculiar
composition, so startling in its contrasts, seems to
have settled into his consciousness ; and over it he
cclxxx

collects a sky, mostly of angry, threatening clouds,,
ragged in the moonlight, or rolling ominously above
the twilight. In all these pictures there is a kind of
gloomy grandeur ; the evidence of a temperament,
for the present, at any rate, sensational rather than
profound; apparently sincere in purpose, but narrow
in its range of sympathy. Technically, too, these
pictures are elementary; contrasts emphasized,
values neglected, and the paintiness of the pigment
very obvious. And these deficiencies are the more
felt because there is very little attempt at drawing,
the forms of things being imperfectly realized and
rendered rather as masses of color, wherefore the
lack of painter-like quality and skill becomes
accentuated. This painter has been so extrava-
gantly heralded that it is difficult to arrive at a just
estimate of his work. If he believes in the ill-
advised laudations, and is satisfied with himself, I
should sum up his work as meretricious ; but if, on
the other hand, his mind still preserves the discon-
tent of the true student, and he knows himself to be
still only feeling after larger power of expressing
what he has in him, then I should reckon these
pictures as remarkable ; the promise, with further
skill of hand and maturity of mental and ocular
vision, of something more notable, in an imaginative
way, than American landscape can yet boast.
Another painter not among the younger ones,
whose work has put him during the past year in a
very prominent place, is Frederick Ballard Wiliiams.
A large picture, which he exhibited at the Lotos Club,
received high praise. Unfortunately, I did not see
it; but if, as I have heard asserted, it is the best of his
studies of water in a tumult of movement, rushing
over rocks along the winding course of a river
hemmed in by rocky banks, then it must be very
good; for in many cases lately he has shown
kindred subjects, about which it was easy to be
sincerely enthusiastic. This year again has shown a
notable increase of strength in Frederick Crane,
Cullen Yates, Walter Hartson, and William Ritschel,
while Colin Campbell Cooper has turned from the
study of old architecture abroad to the painting of
street scenes in American cities with a very
marked advance, both in reality of representation
and pictorial quality. Working along the same
lines, Paul Cornoyer has done some very good
work, recalling the of Raffaelli, but of more
painter-like quality. It is again from the streets,
that Jerome Myers draws his themes, but with
little reference to material facts and much to the
human character. His studies of groups of figures,
under the fitful glare of a street lamp, listening.