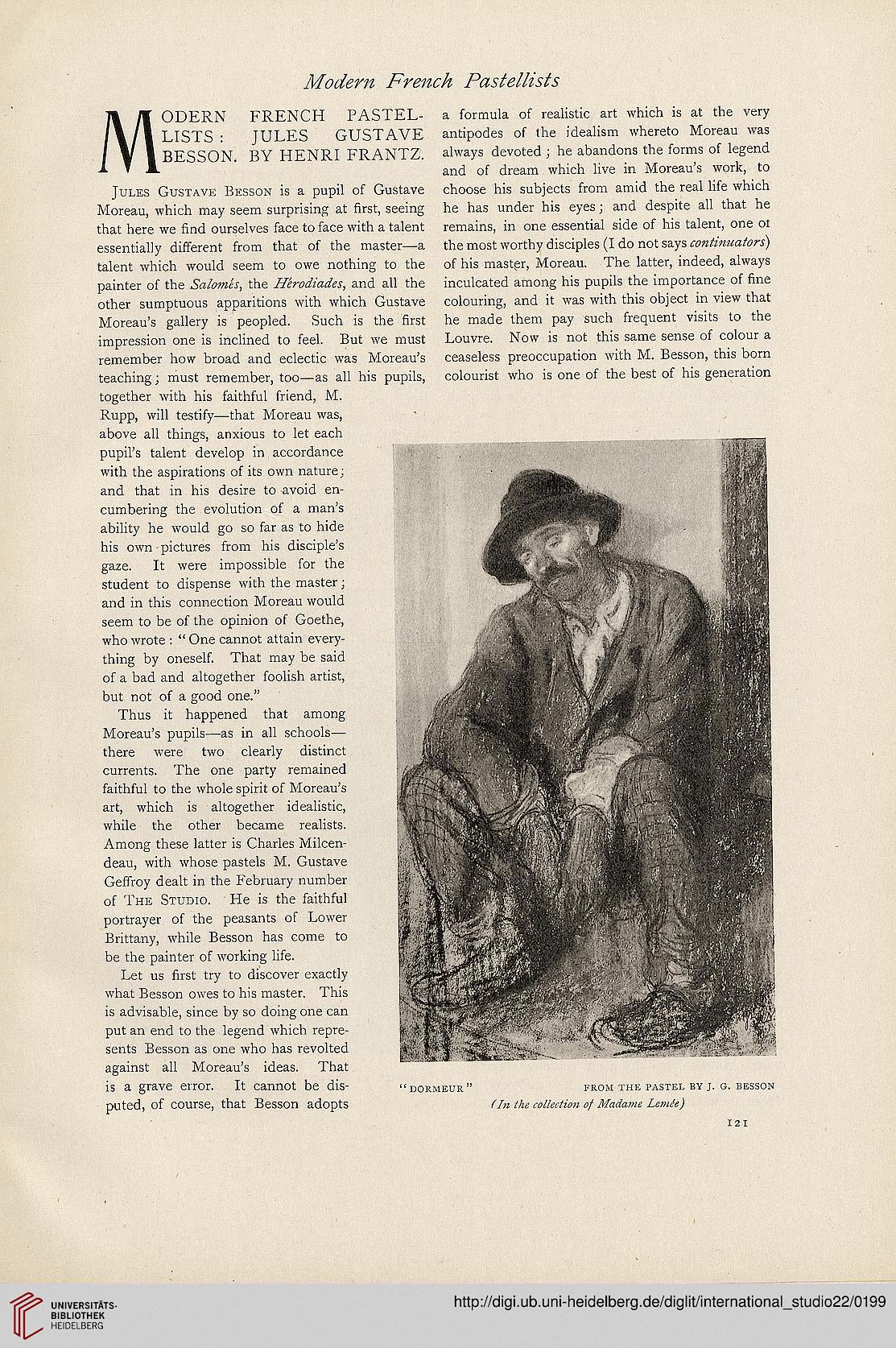 IT ODERN FRENCH PASTEL-
/\/S LISTS : JULES GUSTAVE
j V H BESSON. BY HENRI FRANTZ.
JuLES GusTAVE BESSON is a pupil of Gustave
Moreau, which may seem surprising at first, seeing
that here we find ourselves face to face with a talent
essentially different from that of the master—a
talent which would seem to owe nothing to the
painter of the the and all the
other sumptuous apparitions with which Gustave
Moreau's gallery is peopled. Such is the first
impression one is inclined to feel. But we must
remember how broad and eclectic was Moreau's
teaching; must remember, too—as all his pupils,
together with his faithful friend, M.
Rupp, will testify—that Moreau was,
above all things, anxious to let each
pupil's talent develop in accordance
with the aspirations of its own nature;
and that in his desire to avoid en-
cumbering the evolution of a man's
ability he would go so far as to hide
his own pictures from his disciple's
gaze. It were impossible for the
student to dispense with the master;
and in this connection Moreau would
seem to be of the opinion of Goethe,
who wrote : " One cannot attain every-
thing by oneself. That may be said
of a bad and altogether foolish artist,
but not of a good one."
Thus it happened that among
Moreau's pupils—as in all schools—
there were two clearly distinct
currents. The one party remained
faithful to the whole spirit of Moreau's
art, which is altogether idealistic,
while the other became realists.
Among these latter is Charles Milcen-
deau, with whose pastels M. Gustave
Geffroy dealt in the February number
of THE STUDto. He is the faithful
portrayer of the peasants of Lower
Brittany, while Besson has come to
be the painter of working life.
Let us first try to discover exactly
what Besson owes to his master. This
is advisable, since by so doing one can
put an end to the legend which repre-
sents Besson as one who has revolted
against all Moreau's ideas. That
is a grave error. It cannot be dis-
puted, of course, that Besson adopts

a formula of realistic art which is at the very
antipodes of the idealism whereto Moreau was
always devoted ; he abandons the forms of legend
and of dream which live in Moreau's work, to
choose his subjects from amid the real life which
he has under his eyes; and despite all that he
remains, in one essential side of his talent, one ot
the most worthy disciples (I do not says
of his master, Moreau. The latter, indeed, always
inculcated among his pupils the importance of fine
colouring, and it was with this object in view that
he made them pay such frequent visits to the
Louvre. Now is not this same sense of colour a
ceaseless preoccupation with M. Besson, this born
colourist who is one of the best of his generation