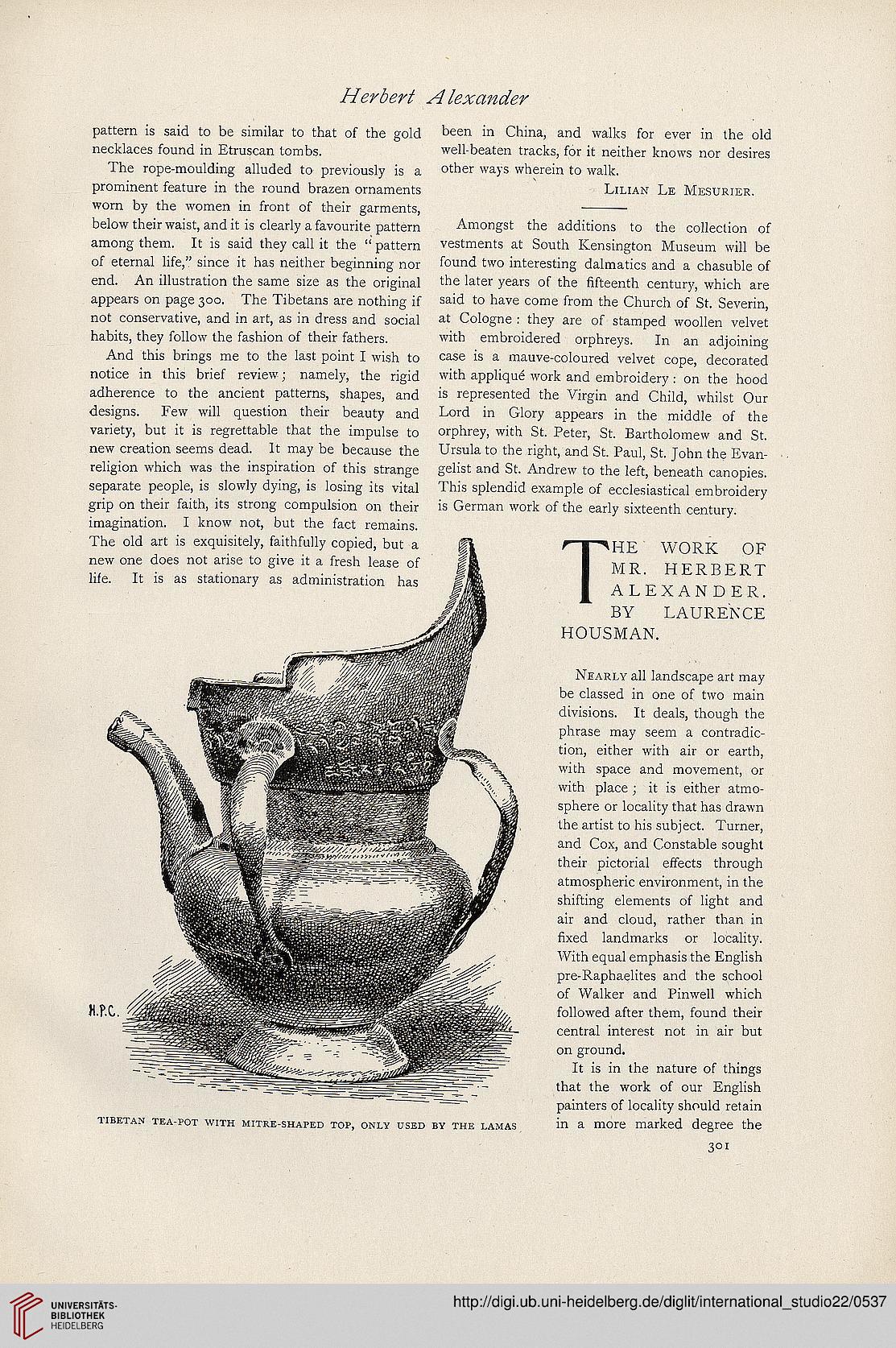 pattern is said to be similar to that of the gold
necklaces found in Etruscan tombs.
The rope-moulding alluded to previously is a
prominent feature in the round brazen ornaments
worn by the women in front of their garments,
below their waist, and it is clearly a favourite pattern
among them. It is said they call it the " pattern
of eternal life," since it has neither beginning nor
end. An illustration the same size as the original
appears on page 300. The Tibetans are nothing if
not conservative, and in art, as in dress and social
habits, they follow the fashion of their fathers.
And this brings me to the last point I wish to
notice in this brief review; namely, the rigid
adherence to the ancient patterns, shapes, and
designs. Few will question their beauty and
variety, but it is regrettable that the impulse to
new creation seems dead. It may be because the
religion which was the inspiration of this strange
separate people, is slowly dying, is losing its vital
grip on their faith, its strong compulsion on their
imagination. I know not, but the fact remains.
The old art is exquisitely, faithfully copied, but a
new one does not arise to give it a fresh lease of
life. It is as stationary as administration has

been in China, and walks for ever in the old
well-beaten tracks, for it neither knows nor desires
other ways wherein to walk.
LILIAN LE MESURIER.


TIBETAN TEA-POT WITH MITRE-SHAPED TOP, ONLY USED BY THE LAMAS

Amongst the additions to the collection of
vestments at South Kensington Museum will be
found two interesting dalmatics and a chasuble of
the later years of the fifteenth century, which are
said to have come from the Church of St. Severin,
at Cologne : they are of stamped woollen velvet
with embroidered orphreys. In an adjoining
case is a mauve-coloured velvet cope, decorated
with appliqu6 work and embroidery : on the hood
is represented the Virgin and Child, whilst Our
Lord in Glory appears in the middle of the
orphrey, with St. Peter, St. Bartholomew and St.
Ursula to the right, and St. Paul, St. John the Evan-
gelist and St. Andrew to the left, beneath canopies.
This splendid example of ecclesiastical embroidery
is German work of the early sixteenth century.

'"TT'HE WORK OF
] MR. HERBERT
ALEXANDER.
BY LAURENCE
HOUSMAN.
NEARLY all landscape art may
be classed in one of two main
divisions. It deals, though the
phrase may seem a contradic-
tion, either with air or earth,
with space and movement, or
with place ; it is either atmo-
sphere or locality that has drawn
the artist to his subject. Turner,
and Cox, and Constable sought
their pictorial effects through
atmospheric environment, in the
shifting elements of light and
air and cloud, rather than in
fixed landmarks or locality.
With equal emphasis the English
pre-Raphaelites and the school
of Walker and Pinwell which
followed after them, found their
central interest not in air but
on ground.
It is in the nature of things
that the work of our English
painters of locality should retain
in a more marked degree the
301