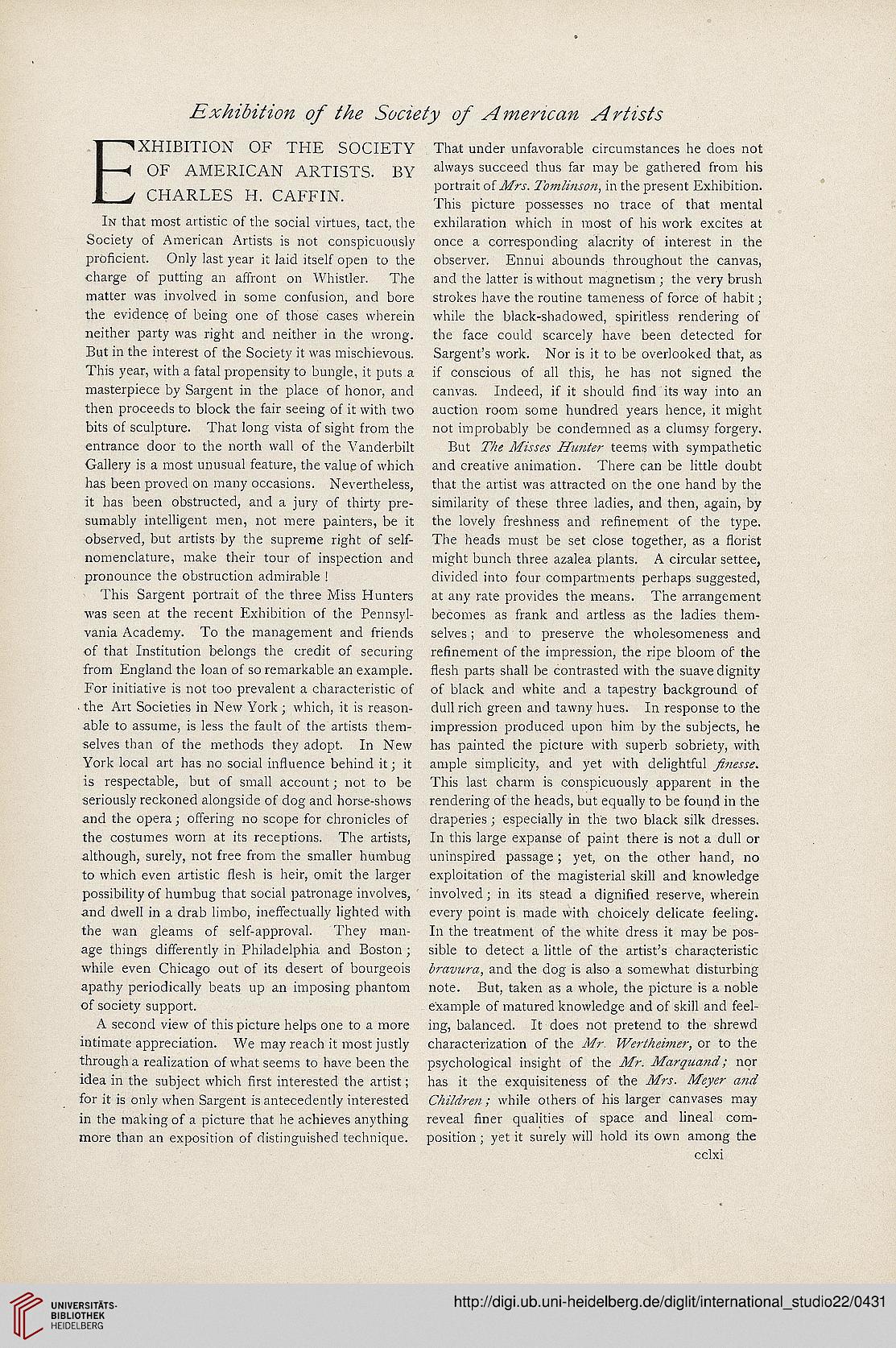 1 EXHIBITION OF THE SOCIETY
j—< OF AMERICAN ARTISTS. BY
! ^ CHARLES II. CAFFIN.
IN that most artistic of the social virtues, tact, the
Society of American Artists is not conspicuously
proficient. Only last year it laid itself open to the
charge of putting an affront on Whistler. The
matter was involved in some confusion, and bore
the evidence of being one of those cases wherein
neither party was right and neither in the wrong.
But in the interest of the Society it was mischievous.
This year, with a fatal propensity to bungle, it puts a
masterpiece by Sargent in the place of honor, and
then proceeds to block the fair seeing of it with two
bits of sculpture. That long vista of sight from the
entrance door to the north wall of the Vanderbilt
Gallery is a most unusual feature, the value of which
has been proved on many occasions. Nevertheless,
it has been obstructed, and a jury of thirty pre-
sumably intelligent men, not mere painters, be it
observed, but artists by the supreme right of self-
nomenclature, make their tour of inspection and
pronounce the obstruction admirable !
This Sargent portrait of the three Miss Hunters
was seen at the recent Exhibition of the Pennsyl-
vania Academy. To the management and friends
of that Institution belongs the credit of securing
from England the loan of so remarkable an example.
For initiative is not too prevalent a characteristic of
the Art Societies in New York ; which, it is reason-
able to assume, is less the fault of the artists them-
selves than of the methods they adopt. In New
York local art has no social influence behind it; it
is respectable, but of small account; not to be
seriously reckoned alongside of dog and horse-shows
and the opera; offering no scope for chronicles of
the costumes worn at its receptions. The artists,
although, surely, not free from the smaller humbug
to which even artistic flesh is heir, omit the larger
possibility of humbug that social patronage involves,
and dwell in a drab limbo, ineffectually lighted with
the wan gleams of self-approval. They man-
age things differently in Philadelphia and Boston ;
while even Chicago out of its desert of bourgeois
apathy periodically beats up an imposing phantom
of society support.
A second view of this picture helps one to a more
intimate appreciation. We may reach it most justly
through a realization of what seems to have been the
idea in the subject which first interested the artist;
for it is only when Sargent is antecedently interested
in the making of a picture that he achieves anything
more than an exposition of distinguished technique.

That under unfavorable circumstances he does not
always succeed thus far may be gathered from his
portrait of TfA. in the present Exhibition.
This picture possesses no trace of that mental
exhilaration which in most of his work excites at
once a corresponding alacrity of interest in the
observer. Ennui abounds throughout the canvas,
and the latter is without magnetism ; the very brush
strokes have the routine tameness of force of habit;
while the black-shadowed, spiritless rendering of
the face could scarcely have been detected for
Sargent's work. Nor is it to be overlooked that, as
if conscious of all this, he has not signed the
canvas. Indeed, if it should find its way into an
auction room some hundred years hence, it might
not improbably be condemned as a clumsy forgery.
But zlAAM Zf/777^7* teems with sympathetic
and creative animation. There can be little doubt
that the artist was attracted on the one hand by the
similarity of these three ladies, and then, again, by
the lovely freshness and refinement of the type.
The heads must be set close together, as a florist
might bunch three azalea plants. A circular settee,
divided into four compartments perhaps suggested,
at any rate provides the means. The arrangement
becomes as frank and artless as the ladies them-
selves ; and to preserve the wholesomeness and
refinement of the impression, the ripe bloom of the
flesh parts shall be contrasted with the suave dignity
of black and white and a tapestry background of
dull rich green and tawny hues. In response to the
impression produced upon him by the subjects, he
has painted the picture with superb sobriety, with
ample simplicity, and yet with delightful AArr.?.
This last charm is conspicuously apparent in the
rendering of the heads, but equally to be found in the
draperies; especially in the two black silk dresses.
In this large expanse of paint there is not a dull or
uninspired passage ; yet, on the other hand, no
exploitation of the magisterial skill and knowledge
involved; in its stead a dignified reserve, wherein
every point is made with choicely delicate feeling.
In the treatment of the white dress it may be pos-
sible to detect a little of the artist's characteristic
and the dog is also a somewhat disturbing
note. But, taken as a whole, the picture is a noble
example of matured knowledge and of skill and feel-
ing, balanced. It does not pretend to the shrewd
characterization of the dA- or to the
psychological insight of the T/)-. nor
has it the exquisiteness of the .A/A. <272<V
,- while others of his larger canvases may
reveal finer qualities of space and lineal com-
position ; yet it surely will hold its own among the
cclxi