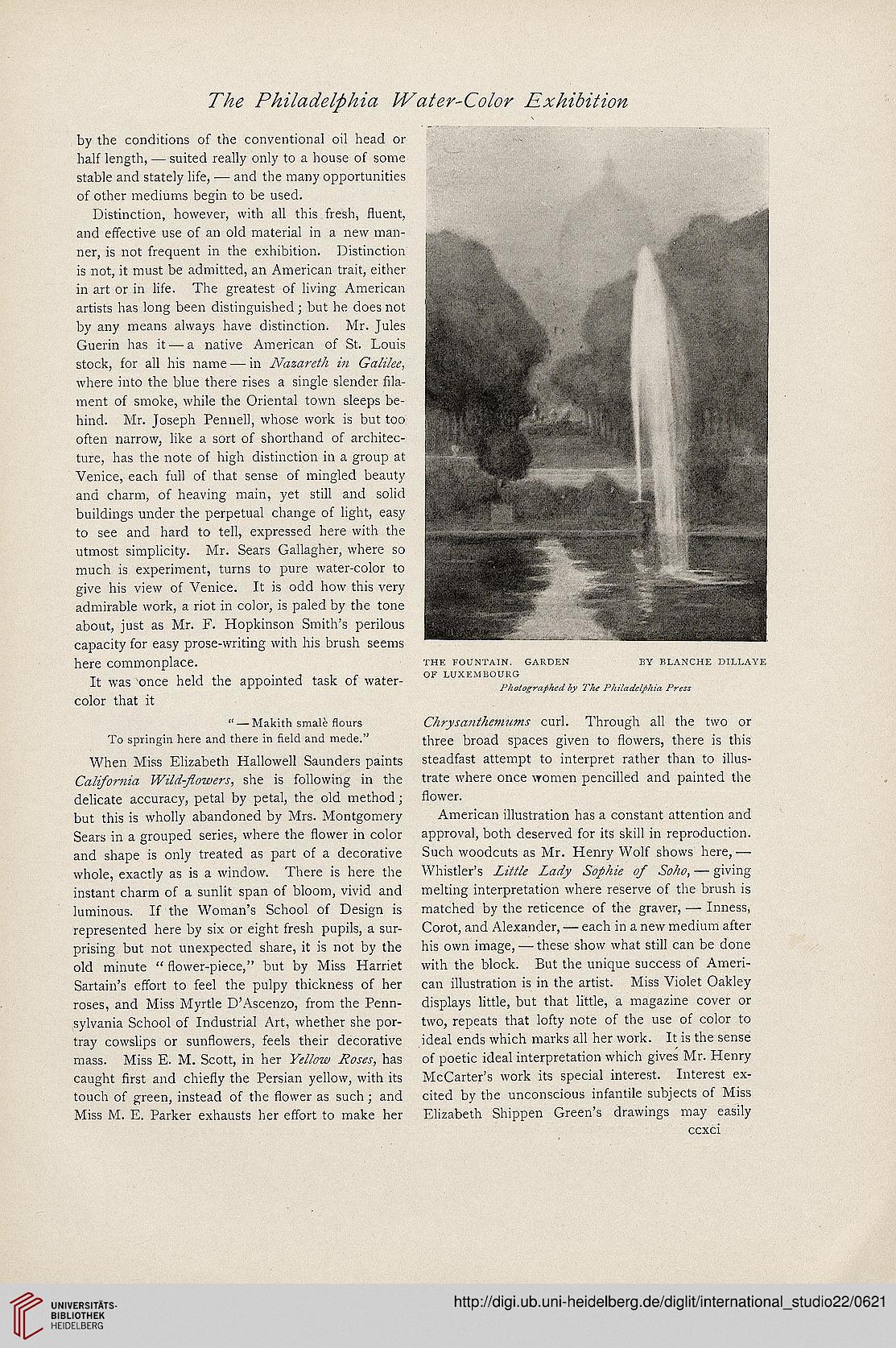 by the conditions of the conventional oil head or
half length, — suited really only to a house of some
stable and stately life, — and the many opportunities
of other mediums begin to be used.
Distinction, however, with all this fresh, fluent,
and effective use of an old material in a new man-
ner, is not frequent in the exhibition. Distinction
is not, it must be admitted, an American trait, either
in art or in life. The greatest of living American
artists has long been distinguished; but he does not
by any means always have distinction. Mr. Jules
Guerin has it—a native American of St. Louis
stock, for all his name — in .Wizard M <?%///&!,
where into the blue there rises a single slender fila-
ment of smoke, while the Oriental town sleeps be-
hind. Mr. Joseph Pennell, whose work is but too
often narrow, like a sort of shorthand of architec-
ture, has the note of high distinction in a group at
Venice, each full of that sense of mingled beauty
and charm, of heaving main, yet still and solid
buildings under the perpetual change of light, easy
to see and hard to tell, expressed here with the
utmost simplicity. Mr. Sears Gallagher, where so
much is experiment, turns to pure water-color to
give his view of Venice. It is odd how this very
admirable work, a riot in color, is paled by the tone
about, just as Mr. F. Hopkinson Smith's perilous
capacity for easy prose-writing with his brush seems
here commonplace.
It was once held the appointed task of water-
color that it
" — Makitli smale Hours
To springin here and there in 6eid and mede."
When Miss Elizabeth Hallowell Saunders paints
she is following in the
delicate accuracy, petal by petal, the old method;
but this is wholly abandoned by Mrs. Montgomery
Sears in a grouped series, where the flower in color
and shape is only treated as part of a decorative
whole, exactly as is a window. There is here the
instant charm of a sunlit span of bloom, vivid and
luminous. If the Woman's School of Design is
represented here by six or eight fresh pupils, a sur-
prising but not unexpected share, it is not by the
old minute " flower-piece," but by Miss Harriet
Sartain's effort to feel the pulpy thickness of her
roses, and Miss Myrtle D'Ascenzo, from the Penn-
sylvania School of Industrial Art, whether she por-
tray cowslips or sunflowers, feels their decorative
mass. Miss E. M. Scott, in her iW/hw has
caught first and chiefly the Persian yellow, with its
touch of green, instead of the flower as such ; and
Miss M. E. Parker exhausts her effort to make her


THE FOUNTAIN. GARDEN BY BLANCHE DILLAYE
OF LUXEMBOURG

curl. Through all the two or
three broad spaces given to flowers, there is this
steadfast attempt to interpret rather than to illus-
trate where once women pencilled and painted the
flower.
American illustration has a constant attention and
approval, both deserved for its skill in reproduction.
Such woodcuts as Mr. Henry Wolf shows here, —
Whistler's Zz'/YZ? Anr/y y -SM;?, — giving
melting interpretation where reserve of the brush is
matched by the reticence of the graver, — Inness,
Corot, and Alexander, — each in a new medium after
his own image, — these show what still can be done
with the block. But the unique success of Ameri-
can illustration is in the artist. Miss Violet Oakley
displays little, but that little, a magazine cover or
two, repeats that lofty note of the use of color to
ideal ends which marks all her work. It is the sense
of poetic ideal interpretation which gives Mr. Henry
McCarter's work its special interest. Interest ex-
cited bv the unconscious infantile subjects of Miss
Elizabeth Shippen Green's drawings may easily
ccxci