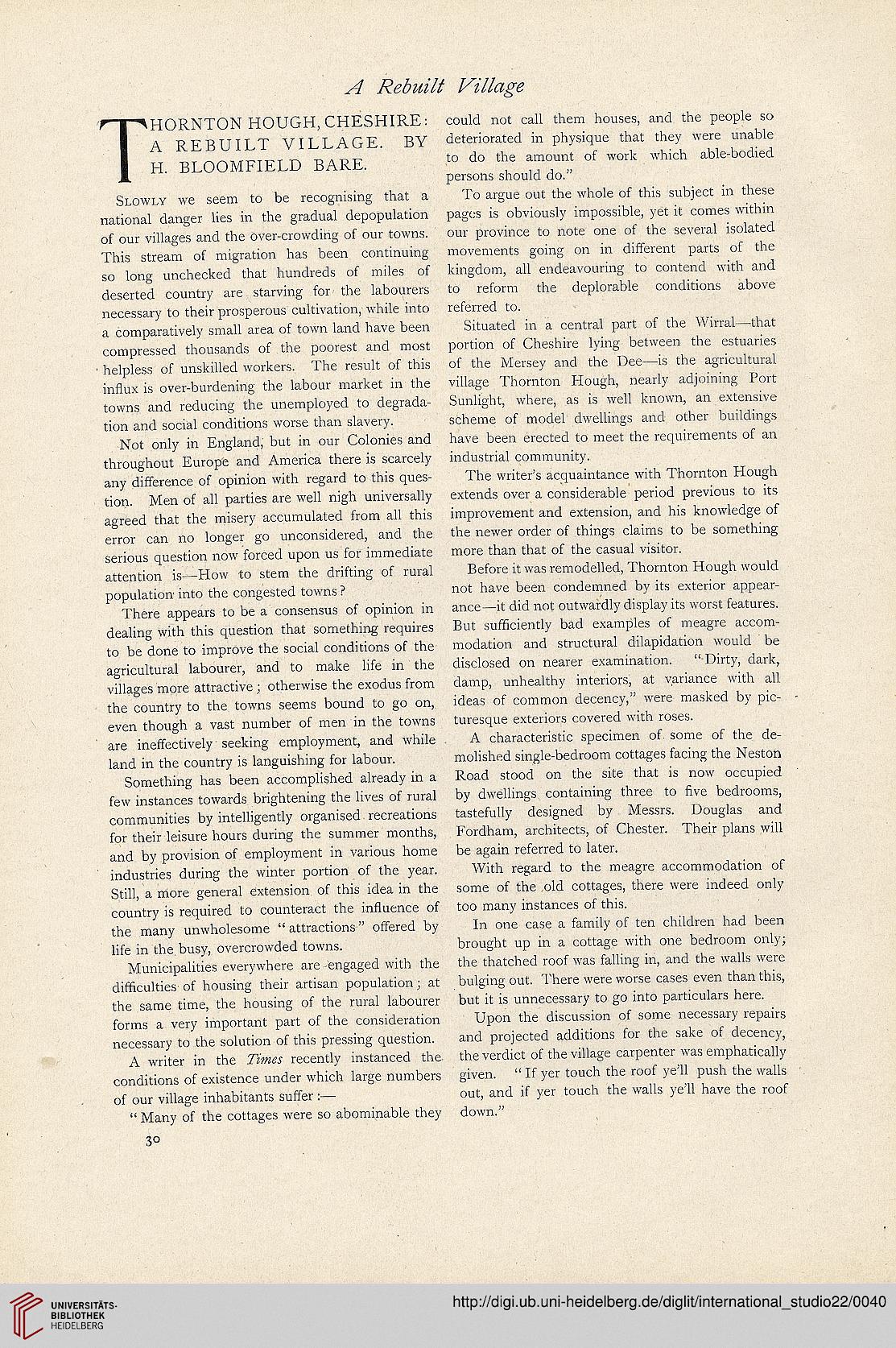 ry-^HORNTON HOUGH, CHESHIRE:
[ A REBUILT VILLAGE. BY
H. BLOOMFIELD BARE.
SLOWLY we seem to be recognising that a
national danger lies in the gradual depopulation
of our villages and the over-crowding of our towns.
This stream of migration has been continuing
so long unchecked that hundreds of miles of
deserted country are starving for the labourers
necessary to their prosperous cultivation, while into
a comparatively small area of town land have been
compressed thousands of the poorest and most
helpless of unskilled workers. The result of this
influx is over-burdening the labour market in the
towns and reducing the unemployed to degrada-
tion and social conditions worse than slavery.
Not only in England, but in our Colonies and
throughout Europe and America there is scarcely
any difference of opinion with regard to this ques-
tion. Men of all parties are well nigh universally
agreed that the misery accumulated from all this
error can no longer go unconsidered, and the
serious question now forced upon us for immediate
attention is—How to stem the drifting of rural
population into the congested towns ?
There appears to be a consensus of opinion in
dealing with this question that something requires
to be done to improve the social conditions of the
agricultural labourer, and to make life in the
villages more attractive ; otherwise the exodus from
the country to the towns seems bound to go on,
even though a vast number of men in the towns
are ineffectively seeking employment, and while
land in the country is languishing for labour.
Something has been accomplished already in a
few instances towards brightening the lives of rural
communities by intelligently organised recreations
for their leisure hours during the summer months,
and by provision of employment in various home
industries during the winter portion of the year.
Still, a more general extension of this idea in the
country is required to counteract the influence of
the many unwholesome " attractions" offered by
life in the busy, overcrowded towns.
Municipalities everywhere are engaged with the
difficulties of housing their artisan population; at
the same time, the housing of the rural labourer
forms a very important part of the consideration
necessary to the solution of this pressing question.
A writer in the recently instanced the
conditions of existence under which large numbers
of our village inhabitants suffer :—
" Many of the cottages were so abominable they
3°

could not call them houses, and the people so
deteriorated in physique that they were unable
to do the amount of work which able-bodied
persons should do."
To argue out the whole of this subject in these
pages is obviously impossible, yet it comes within
our province to note one of the several isolated
movements going on in different parts of the
kingdom, all endeavouring to contend with and
to reform the deplorable conditions above
referred to.
Situated in a central part of the Wirral—that
portion of Cheshire lying between the estuaries
of the Mersey and the Dee—is the agricultural
village Thornton Hough, nearly adjoining Port
Sunlight, where, as is well known, an extensive
scheme of model dwellings and other buildings
have been erected to meet the requirements of an
industrial community.
The writer's acquaintance with Thornton Hough
extends over a considerable period previous to its
improvement and extension, and his knowledge of
the newer order of things claims to be something
more than that of the casual visitor.
Before it was remodelled, Thornton Hough would
not have been condemned by its exterior appear-
ance—it did not outwardly display its worst features.
But sufficiently bad examples of meagre accom-
modation and structural dilapidation would be
disclosed on nearer examination. " Dirty, dark,
damp, unhealthy interiors, at variance with all
ideas of common decency," were masked by pic-
turesque exteriors covered with roses.
A characteristic specimen of some of the de-
molished single-bedroom cottages facing the Neston
Road stood on the site that is now occupied
by dwellings containing three to five bedrooms,
tastefully designed by Messrs. Douglas and
Fordham, architects, of Chester. Their plans will
be again referred to later.
With regard to the meagre accommodation of
some of the old cottages, there were indeed only
too many instances of this.
In one case a family of ten children had been
brought up in a cottage with one bedroom only;
the thatched roof was falling in, and the walls were
bulging out. There were worse cases even than this,
but it is unnecessary to go into particulars here.
Upon the discussion of some necessary repairs
and projected additions for the sake of decency,
the verdict of the village carpenter was emphatically
given. " If yer touch the roof ye'll push the walls
out, and if yer touch the walls ye'll have the roof
down."