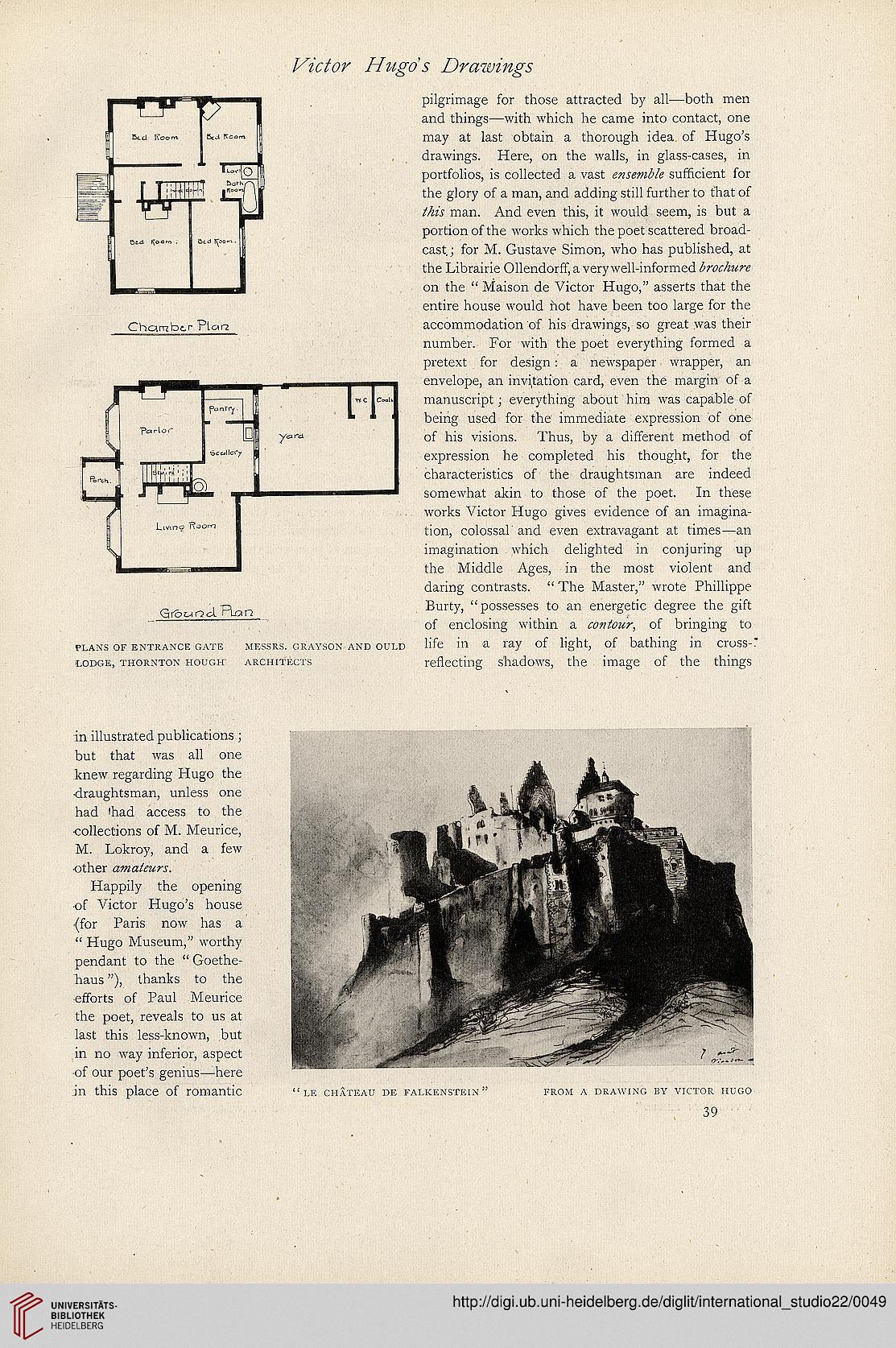 pilgrimage for those attracted by al!—both men
and things—with which he came into contact, one
may at last obtain a thorough idea of Hugo's
drawings. Here, on the waits, in glass-cases, in
portfolios, is collected a vast sufficient for
the glory of a man, and adding still further to that of
man. And even this, it would seem, is but a
portion of the works which the poet scattered broad-
cast.; for M. Gustave Simon, who has published, at
the Librairie Ollendorff, a very well-informed
on the " Maison de Victor Hugo," asserts that the
entire house would hot have been too large for the
accommodation of his drawings, so great was their
number. For with the poet everything formed a
pretext for design : a newspaper wrapper, an
envelope, an invitation card, even the margin of a
manuscript; everything about him was capable of
being used for the immediate expression of one
of his visions. Thus, by a different method of
expression he completed his thought, for the
characteristics of the draughtsman are indeed
somewhat akin to those of the poet. In these
works Victor Hugo gives evidence of an imagina-
tion, colossal and even extravagant at times—an
imagination which delighted in conjuring up
the Middle Ages, in the most violent and
daring contrasts. " The Master," wrote Phillippe
Burty, " possesses to an energetic degree the gift
of enclosing within a <ro77/<7M7-, of bringing to
life in a ray of light, of bathing in cross-"
reflecting shadows, the image of the things


in illustrated publications;
but that was all one
knew regarding Hugo the
draughtsman, unless one
had 'had access to the
collections of M. Meurice,
M. Lokroy, and a few
other
Happily the opening
of Victor Hugo's house
(for Paris now has a
" Hugo Museum," worthy
pendant to the " Goethe-
haus"), thanks to the
efforts of Paul Meurice
the poet, reveals to us at
last this less-known, but
in no way inferior, aspect
of our poet's genius—here
in this place of romantic

" I.E CHATEAU DE FALKENSTEIN " FROM A DRAWING BY VICTOR HUGO