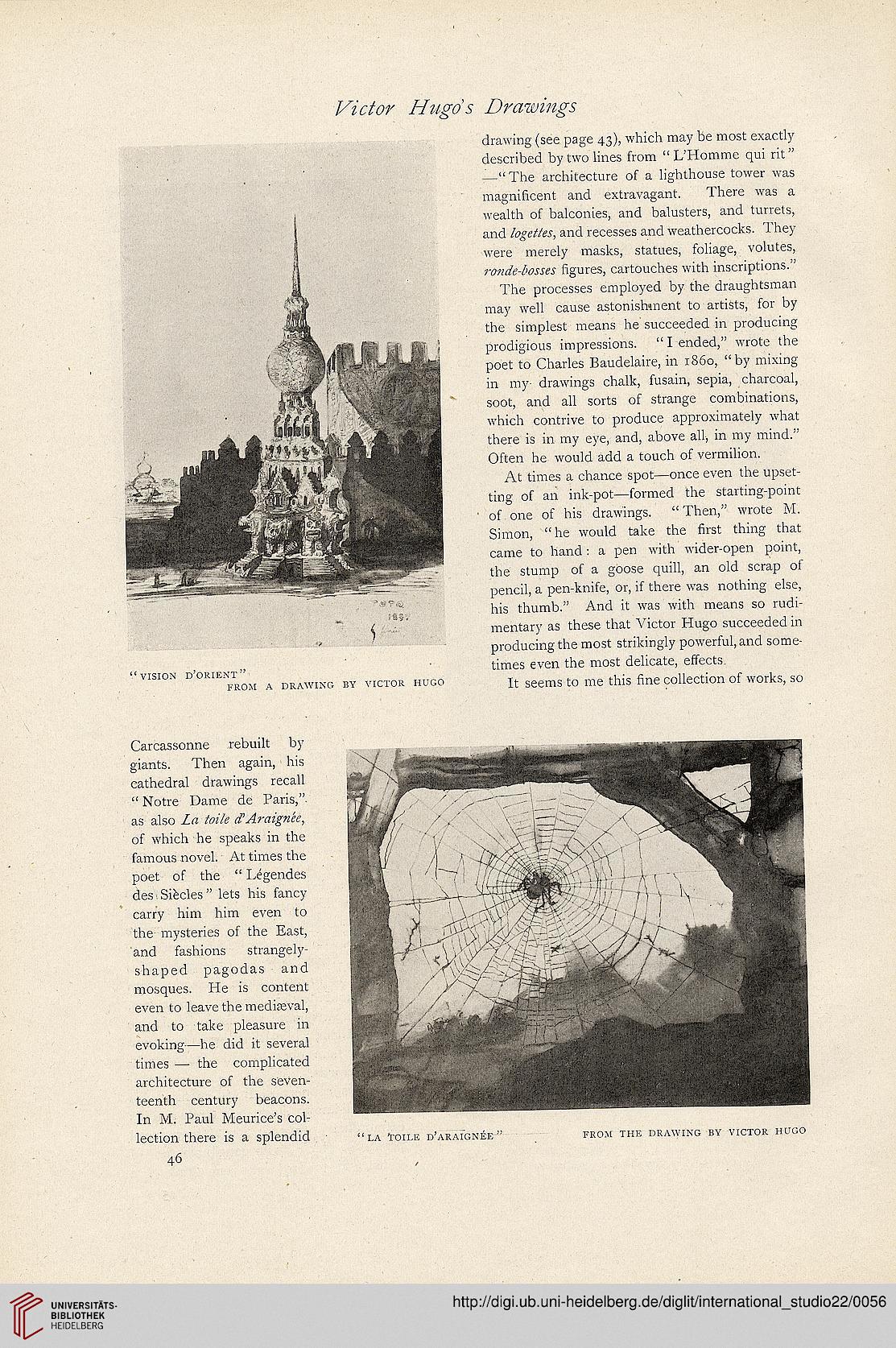 "VISION n'ORIENT"
FROM A DRAWING BY VICTOR HUGO

drawing (see page 43), which may be most exactly
described by two lines from "UHomme qui rit"
—" The architecture of a lighthouse tower was
magnificent and extravagant. There was a
wealth of balconies, and balusters, and turrets,
and and recesses and weathercocks. They
were merely masks, statues, foliage, volutes,
7WzZ?-Jw.f<M' figures, cartouches with inscriptions."
The processes employed by the draughtsman
may well cause astonishment to artists, for by
the simplest means he succeeded in producing
prodigious impressions. "I ended," wrote the
poet to Charles Baudelaire, in i860, "by mixing
in my drawings chalk, fusain, sepia, charcoal,
soot, and all sorts of strange combinations,
which contrive to produce approximately what
there is in my eye, and, above all, in my mind."
Often he would add a touch of vermilion.
At times a chance spot—once even the upset-
ting of an ink-pot—formed the starting-point
of one of his drawings. " Then," wrote M.
Simon, "he would take the first thing that
came to hand: a pen with wider-open point,
the stump of a goose quill, an old scrap of
pencil, a pen-knife, or, if there was nothing else,
his thumb." And it was with means so rudi-
mentary as these that Victor Hugo succeeded in
producing the most strikingly powerful, and some-
times even the most delicate, effects.
It seems to me this fine collection of works, so


Carcassonne rebuilt by
giants. Then again, his
cathedral drawings recall
" Notre Dame de Paris,",
as also Zn
of which he speaks in the
famous novel. At times the
poet of the " Legendes
des Sihcles" lets his fancy
carry him him even to
the mysteries of the East,
and fashions strangely-
shaped pagodas and
mosques. He is content
even to leave the mediaeval,
and to take pleasure in
evoking—he did it several
times — the complicated
architecture of the seven-
teenth century beacons.
In M. Paul Meurice's col-
lection there is a splendid
46

"LA TOILE D'ARAIGNEE" FROM THE DRAWING BY VICTOR HUGO