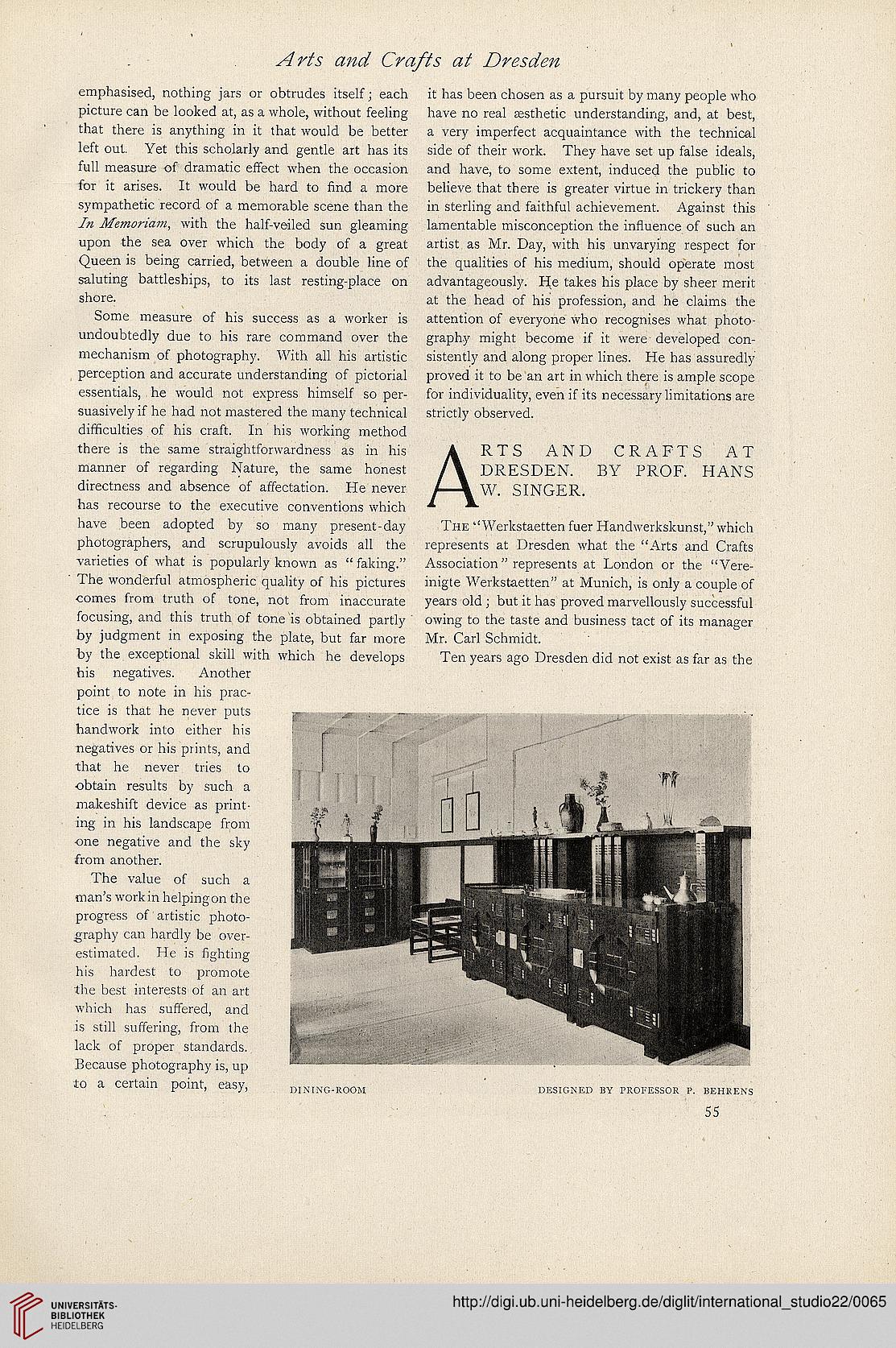 emphasised, nothing jars or obtrudes itself; each
picture can be looked at, as a whole, without feeling
that there is anything in it that would be better
left out. Yet this scholarly and gentle art has its
full measure of dramatic effect when the occasion
for it arises. It would be hard to find a more
sympathetic record of a memorable scene than the
Yu with the half-veiled sun gleaming
upon the sea over which the body of a great
Queen is being carried, between a double line of
saluting battleships, to its last resting-place on
shore.
Some measure of his success as a worker is
undoubtedly due to his rare command over the
mechanism of photography. With all his artistic
perception and accurate understanding of pictorial
essentials, he would not express himself so per-
suasively if he had not mastered the many technical
difficulties of his craft. In his working method
there is the same straightforwardness as in his
manner of regarding Nature, the same honest
directness and absence of affectation. He never
has recourse to the executive conventions which
have been adopted by so many present-day
photographers, and scrupulously avoids all the
varieties of what is popularly known as " faking."
The wonderful atmospheric quality of his pictures
comes from truth of tone, not from inaccurate
focusing, and this truth of tone is obtained partly
by judgment in exposing the plate, but far more
by the exceptional skill with which he develops
his negatives. Another
point to note in his prac-
tice is that he never puts
handwork into either his
negatives or his prints, and
that he never tries to
obtain results by such a
makeshift device as print-
ing in his landscape from
one negative and the sky
from another.
The value of such a
man's work in helpingon the
progress of artistic photo-
graphy can hardly be over-
estimated. He is fighting
his hardest to promote
the best interests of an art
which has suffered, and
is still suffering, from the
lack of proper standards.
Because photography is, up
to a certain point, easy, DiNiNG-RooM

it has been chosen as a pursuit by many people who
have no real aesthetic understanding, and, at best,
a very imperfect acquaintance with the technical
side of their work. They have set up false ideals,
and have, to some extent, induced the public to
believe that there is greater virtue in trickery than
in sterling and faithful achievement. Against this
lamentable misconception the influence of such an
artist as Mr. Day, with his unvarying respect for
the qualities of his medium, should operate most
advantageously. He takes his place by sheer merit
at the head of his profession, and he claims the
attention of everyone who recognises what photo-
graphy might become if it were developed con-
sistently and along proper lines. He has assuredly
proved it to be an art in which there is ample scope
for individuality, even if its necessary limitations are
strictly observed.
RTS AND CRAFTS AT
DRESDEN. BY PROF. HANS
W. SINGER.
THE "Werkstaetten fuer Handwerkskunst," which
represents at Dresden what the "Arts and Crafts
Association" represents at London or the "Vere-
inigte Werkstaetten" at Munich, is only a couple of
years old ; but it has proved marvellously successful
owing to the taste and business tact of its manager
Mr. Carl Schmidt.
Ten years ago Dresden did not exist as far as the