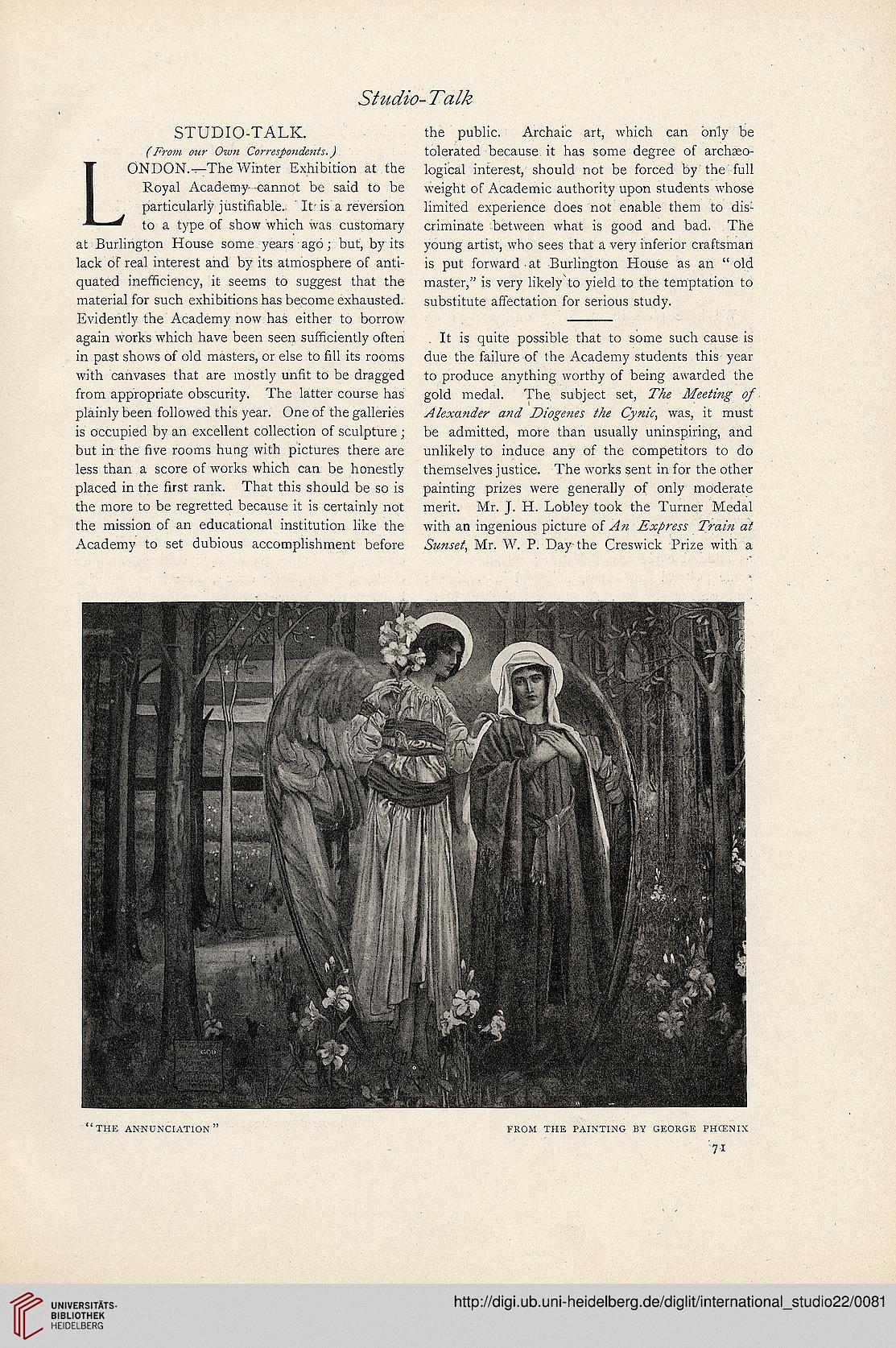 FROM THE TAINTING BY GEORGE FHCENIX

STUDIO-TALK.
/y^7V772, Z?2Z7' OK77Z Cf 7*7*ar^7ZZ%Z727.f. J
ONDON.—The Winter Exhibition at the
Royal Academy cannot be said to be
particularly justifiable. It is a reversion
^ ** to a type of show which was customary
at Burlington House some years ago; but, by its
lack of real interest and by its atmosphere of anti-
quated inefficiency, it seems to suggest that the
material for such exhibitions has become exhausted.
Evidently the Academy now has either to borrow
again works which have been seen sufficiently often
in past shows of old masters, or else to fill its rooms
with canvases that are mostly unfit to be dragged
from appropriate obscurity. The latter course has
plainly been followed this year. One of the galleries
is occupied by an excellent collection of sculpture;
but in the five rooms hung with pictures there are
less than a score of works which can be honestly
placed in the 8rst rank. That this should be so is
the more to be regretted because it is certainly not
the mission of an educational institution like the
Academy to set dubious accomplishment before

the public. Archaic art, which can only be
tolerated because it has some degree of archaeo-
logical interest, should not be forced by the full
weight of Academic authority upon students whose
limited experience does not enable them to dis-
criminate between what is good and bad. The
young artist, who sees that a very inferior craftsman
is put forward at Burlington House as an " old
master/' is very likely to yield to the temptation to
substitute affectation for serious study.

It is quite possible that to some such cause is
due the failure of the Academy students this year
to produce anything worthy of being awarded the
gold medal. The subject set,
<3777/ Dib^72M Qwk, was, it must
be admitted, more than usually uninspiring, and
unlikely to induce any of the competitors to do
themselves justice. The works sent in for the other
painting prizes were generally of only moderate
merit. Mr. J. H. Lobley took the Turner Medal
with an ingenious picture of ^77 TnzzM a/
Mr. W. P. Day the Creswick Prize with a