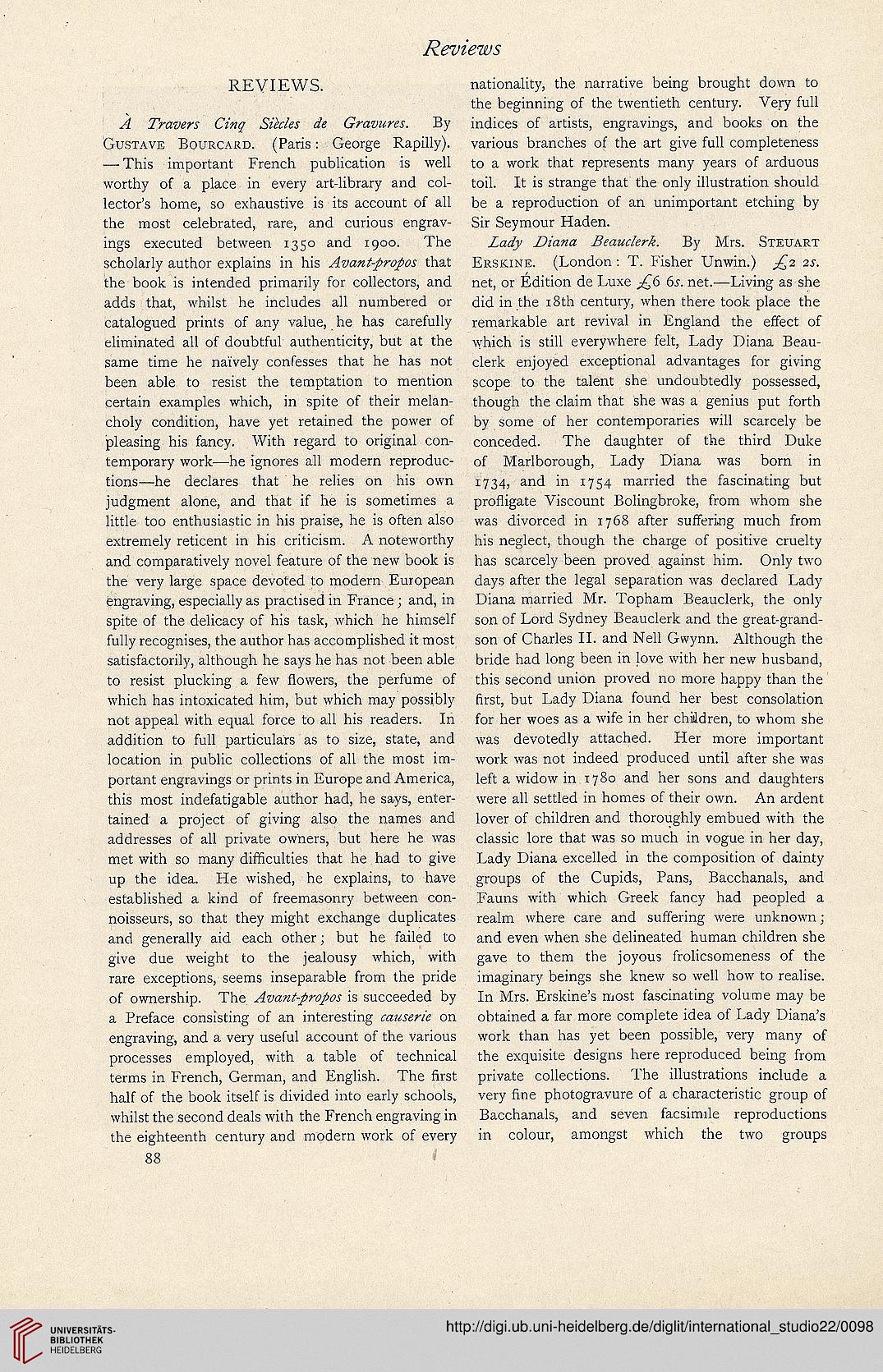 REVIEWS.
V Z7*aw7-.f Cz'zzy zfg By
GuSTAVE BouRCAKD. (Paris: George RapiHy).
— This important French publication is weU
worthy of a place in every art-library and col-
lector's home, so exhaustive is its account of all
the most celebrated, rare, and curious engrav-
ings executed between 1350 and 1900. The
scholarly author explains in his that
the book is intended primarily for collectors, and
adds that, whilst he includes all numbered or
catalogued prints of any value, he has carefully
eliminated all of doubtful authenticity, but at the
same time he naively confesses that he has not
been able to resist the temptation to mention
certain examples which, in spite of their melan-
choly condition, have yet retained the power of
pleasing his fancy. With regard to original con-
temporary work—he ignores all modern reproduc-
tions—he declares that he relies on his own
judgment alone, and that if he is sometimes a
little too enthusiastic in his praise, he is often also
extremely reticent in his criticism. A noteworthy
and comparatively novel feature of the new book is
the very large space devoted to modern European
engraving, especially as practised in France; and, in
spite of the delicacy of his task, which he himself
fully recognises, the author has accomplished it most
satisfactorily, although he says he has not been able
to resist plucking a few flowers, the perfume of
which has intoxicated him, but which may possibly
not appeal with equal force to all his readers. In
addition to full particulars as to size, state, and
location in public collections of all the most im-
portant engravings or prints in Europe and America,
this most indefatigable author had, he says, enter-
tained a project of giving also the names and
addresses of all private owners, but here he was
met with so many difficulties that he had to give
up the idea. He wished, he explains, to have
established a kind of freemasonry between con-
noisseurs, so that they might exchange duplicates
and generally aid each other; but he failed to
give due weight to the jealousy which, with
rare exceptions, seems inseparable from the pride
of ownership. The is succeeded by
a Preface consisting of an interesting razz^y/g on
engraving, and a very useful account of the various
processes employed, with a table of technical
terms in French, German, and English. The first
half of the book itself is divided into early schools,
whilst the second deals with the French engraving in
the eighteenth century and modern work of every
88

nationality, the narrative being brought down to
the beginning of the twentieth century. Very full
indices of artists, engravings, and books on the
various branches of the art give full completeness
to a work that represents many years of arduous
toil. It is strange that the only illustration should
be a reproduction of an unimportant etching by
Sir Seymour Haden.
ZaZv ZVazza ZcazzrZzZ. By Mrs. SiEUART
ERSKiNE. (London : T. Fisher Unwin.) ^2 2J.
net, or Edition de Luxe ^(6 6y. net.—Living as she
did in the 18th century, when there took place the
remarkable art revival in England the effect of
which is still everywhere felt, Lady Diana Beau-
clerk enjoyed exceptional advantages for giving
scope to the talent she undoubtedly possessed,
though the claim that she was a genius put forth
by some of her contemporaries will scarcely be
conceded. The daughter of the third Duke
of Marlborough, Lady Diana was born in
1734, and in 1754 married the fascinating but
profligate Viscount Bolingbroke, from whom she
was divorced in 1768 after suffering much from
his neglect, though the charge of positive cruelty
has scarcely been proved against him. Only two
days after the legal separation was declared Lady
Diana married Mr. Topham Beauclerk, the only
son of Lord Sydney Beauclerk and the great-grand-
son of Charles II. and Nell Gwynn. Although the
bride had long been in love with her new husband,
this second union proved no more happy than the
first, but Lady Diana found her best consolation
for her woes as a wife in her children, to whom she
was devotedly attached. Her more important
work was not indeed produced until after she was
left a widow in 1780 and her sons and daughters
were all settled in homes of their own. An ardent
lover of children and thoroughly embued with the
classic lore that was so much in vogue in her day,
Lady Diana excelled in the composition of dainty
groups of the Cupids, Pans, Bacchanals, and
Fauns with which Greek fancy had peopled a
realm where care and suffering were unknown;
and even when she delineated human children she
gave to them the joyous frolicsomeness of the
imaginary beings she knew so well how to realise.
In Mrs. Erskine's most fascinating volume may be
obtained a far more complete idea of Lady Diana's
work than has yet been possible, very many of
the exquisite designs here reproduced being from
private collections. The illustrations include a
very fine photogravure of a characteristic group of
Bacchanals, and seven facsimile reproductions
in colour, amongst which the two groups