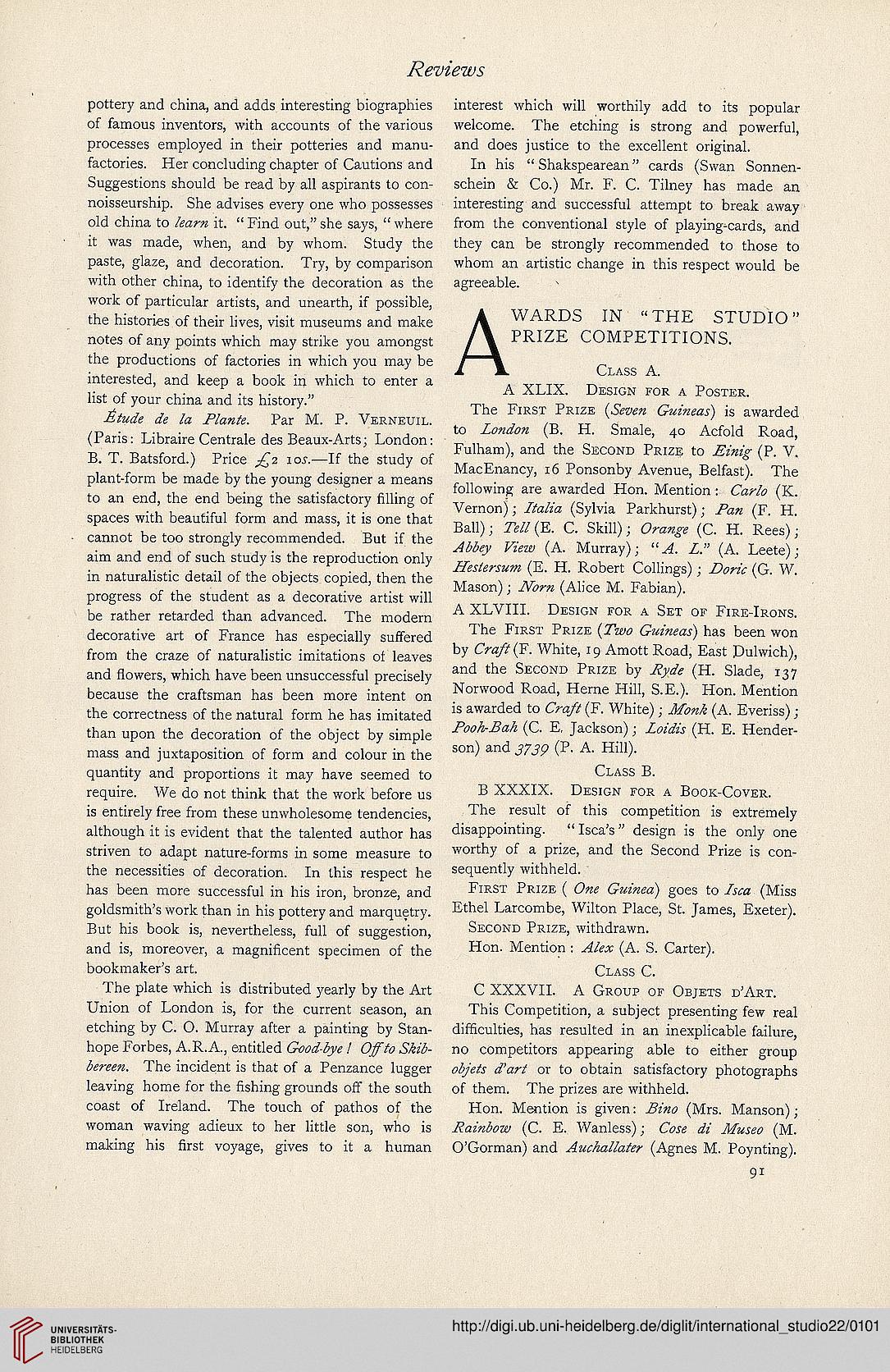 pottery and china, and adds interesting biographies
of famous inventors, with accounts of the various
processes employed in their potteries and manu-
factories. Her concluding chapter of Cau tions and
Suggestions should be read by all aspirants to con-
noisseurship. She advises every one who possesses
old china to /gar?; it. " Find out," she says, " where
it was made, when, and by whom. Study the
paste, glaze, and decoration. Try, by comparison
with other china, to identify the decoration as the
work of particular artists, and unearth, if possible,
the histories of their lives, visit museums and make
notes of any points which may strike you amongst
the productions of factories in which you may be
interested, and keep a book in which to enter a
list of your china and its history."
Z:AzZg /a ZVazzA. Par M. P. VERNEUIL.
(Paris: LibraireCentrale desBeaux-Arts; London:
B. T. Batsford.) Price ^2 10L—If the study of
plant-form be made by the young designer a means
to an end, the end being the satisfactory filling of
spaces with beautiful form and mass, it is one that
cannot be too strongly recommended. But if the
aim and end of such study is the reproduction only
in naturalistic detail of the objects copied, then the
progress of the student as a decorative artist will
be rather retarded than advanced. The modern
decorative art of France has especially suffered
from the craze of naturalistic imitations of leaves
and flowers, which have been unsuccessful precisely
because the craftsman has been more intent on
the correctness of the natural form he has imitated
than upon the decoration of the object by simple
mass and juxtaposition of form and colour in the
quantity and proportions it may have seemed to
require. We do not think that the work before us
is entirely free from these unwholesome tendencies,
although it is evident that the talented author has
striven to adapt nature-forms in some measure to
the necessities of decoration. In this respect he
has been more successful in his iron, bronze, and
goldsmith's work than in his pottery and marquetry.
But his book is, nevertheless, full of suggestion,
and is, moreover, a magnificent specimen of the
bookmaker's art.
The plate which is distributed yearly by the Art
Union of London is, for the current season, an
etching by C. O. Murray after a painting by Stan-
hope Forbes, A.R.A., entitled h? <Sl%z'A
A?z%:zz. The incident is that of a Penzance lugger
leaving home for the fishing grounds off the south
coast of Ireland. The touch of pathos of the
woman waving adieux to her little son, who is
making his first voyage, gives to it a human

interest which will worthily add to its popular
welcome. The etching is strong and powerful,
and does justice to the excellent original.
In his " Shakspearean" cards (Swan Sonnen-
schein & Co.) Mr. F. C. Tilney has made an
interesting and successful attempt to break away
from the conventional style of playing-cards, and
they can be strongly recommended to those to
whom an artistic change in this respect would be
agreeable.
WARDS IN "THE STUDIO"
PRIZE COMPETITIONS.
CLASS A.
A XLIX. DESIGN FOR A POSTER.
The FIRST PRIZE (&wzz Gzzzzzdw) is awarded
to Zazzzfazz (B. H. Smale, 40 Acfold Road,
Fulham), and the SECOND PRIZE to jSz'zzzjg (P. V.
MacEnancy, 16 Ponsonby Avenue, Belfast). The
following are awarded Hon. Mention : 6az*Z? (K.
Vernon); ZWz'a (Sylvia Parkhurst); Zhzz (F. H.
Ball); ZN7 (E. C. Skill); Oz-azz^ (C. H. Rees);
Fzcw (A. Murray); " H. Z." (A. Leete);
ZCfAz'.wzzz (E. H. Robert Codings); Z?az-zb (G. W.
Mason); Whz-zz (Alice M. Fabian).
A XLVIII. DESIGN FOR A SET OF FlRE-lRONS.
The FiRST PRIZE (Zzw Czzz'zzMy) has been won
by Cz*%/? (F. White, 19 Amott Road, East Dulwich),
and the SECOND PRIZE by (H. Slade, 137
Norwood Road, Herne Hill, S.E.). Hon. Mention
is awarded to Cz*a/? (F. White); AZzzz^ (A. Everiss) j
ZbzWZaZ (C. E. Jackson); Z^z'Z'y (H. E. Hender-
son) and j/jp (P. A. Hill).
CLASS B.
B XXXIX. DESIGN FOR A BOOK-COVER.
The result of this competition is extremely
disappointing. " Isca's " design is the only one
worthy of a prize, and the Second Prize is con-
sequently withheld.
FiRST PRIZE ( Ozz<? Gzzz'zz^a) goes to Zira (Miss
Ethel Larcombe, Wilton Place, St. James, Exeter).
SECOND PRIZE, withdrawn.
Hon. Mention : (A. S. Carter).
CLASS C.
C XXXVII. A GROUP OF OBJETS D'ART.
This Competition, a subject presenting few real
difficulties, has resulted in an inexplicable failure,
no competitors appearing able to either group
Zaz-z* or to obtain satisfactory photographs
of them. The prizes are withheld.
Hon. Mention is given: Z?z'zza (Mrs. Manson);
WazzzA??<y (C. E. Wanless); Care <Z' dZzrea (M.
O'Gorman) and ^fzze^a//aAz- (Agnes M. Poynting).
9i