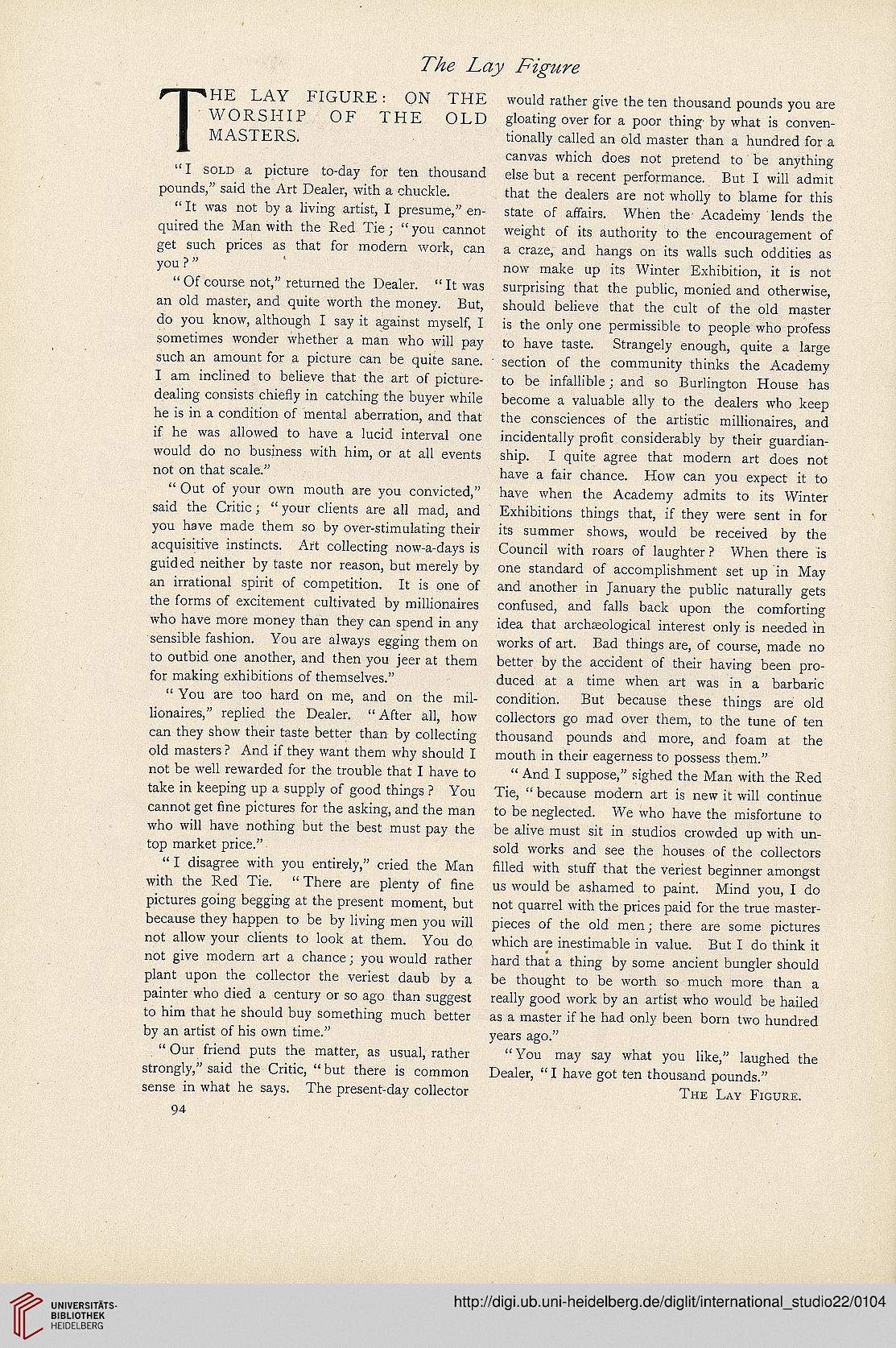 r-n*^HE LAY FIGURE: ON THE
] WORSHIP OF THE OLD
MASTERS.
" I SOLD a picture to-day for ten thousand
pounds," said the Art Dealer, with a chuckle.
" It was not by a living artist, I presume," en-
quired the Man with the Red Tie; " you cannot
get such prices as that for modern work, can
you ? "
" Of course not," returned the Dealer. " It was
an old master, and quite worth the money. But,
do you know, although I say it against myself, I
sometimes wonder whether a man who will pay
such an amount for a picture can be quite sane.
I am inclined to believe that the art of picture-
dealing consists chiefly in catching the buyer while
he is in a condition of mental aberration, and that
if he was allowed to have a lucid interval one
would do no business with him, or at all events
not on that scale."
" Out of your own mouth are you convicted,"
said the Critic ; " your clients are all mad, and
you have made them so by over-stimulating their
acquisitive instincts. Art collecting now-a-days is
guided neither by taste nor reason, but merely by
an irrational spirit of competition. It is one of
the forms of excitement cultivated by millionaires
who have more money than they can spend in any
sensible fashion. You are always egging them on
to outbid one another, and then you jeer at them
for making exhibitions of themselves."
" You are too hard on me, and on the mil-
lionaires," replied the Dealer. " After all, how
can they show their taste better than by collecting
old masters ? And if they want them why should I
not be well rewarded for the trouble that I have to
take in keeping up a supply of good things ? You
cannot get fine pictures for the asking, and the man
who will have nothing but the best must pay the
top market price."
" I disagree with you entirely," cried the Man
with the Red Tie. " There are plenty of fine
pictures going begging at the present moment, but
because they happen to be by living men you will
not allow your clients to look at them. You do
not give modern art a chance; you would rather
plant upon the collector the veriest daub by a
painter who died a century or so ago than suggest
to him that he should buy something much better
by an artist of his own time."
" Our friend puts the matter, as usual, rather
strongly," said the Critic, " but there is common
sense in what he says. The present-day collector
94

would rather give the ten thousand pounds you are
gloating over for a poor thing by what is conven-
tionally called an old master than a hundred for a
canvas which does not pretend to be anything
else but a recent performance. But I will admit
that the dealers are not wholly to blame for this
state of affairs. When the Academy lends the
weight of its authority to the encouragement of
a craze, and hangs on its walls such oddities as
now make up its Winter Exhibition, it is not
surprising that the public, monied and otherwise,
should believe that the cult of the old master
is the only one permissible to people who profess
to have taste. Strangely enough, quite a large
section of the community thinks the Academy
to be infallible; and so Burlington House has
become a valuable ally to the dealers who keep
the consciences of the artistic millionaires, and
incidentally profit considerably by their guardian-
ship. I quite agree that modern art does not
have a fair chance. How can you expect it to
have when the Academy admits to its Winter
Exhibitions things that, if they were sent in for
its summer shows, would be received by the
Council with roars of laughter ? When there is
one standard of accomplishment set up in May
and another in January the public naturally gets
confused, and falls back upon the comforting
idea that archaeological interest only is needed in
works of art. Bad things are, of course, made no
better by the accident of their having been pro-
duced at a time when art was in a barbaric
condition. But because these things are old
collectors go mad over them, to the tune of ten
thousand pounds and more, and foam at the
mouth in their eagerness to possess them."
" And I suppose," sighed the Man with the Red
Tie, " because modern art is new it will continue
to be neglected. We who have the misfortune to
be alive must sit in studios crowded up with un-
sold works and see the houses of the collectors
Ailed with stuff that the veriest beginner amongst
us would be ashamed to paint. Mind you, I do
not quarrel with the prices paid for the true master-
pieces of the old men; there are some pictures
which are inestimable in value. But I do think it
hard that a thing by some ancient bungler should
be thought to be worth so much more than a
really good work by an artist who would be hailed
as a master if he had only been born two hundred
years ago."
"You may say what you like," laughed the
Dealer, " I have got ten thousand pounds."
THE LAY FIGURE.