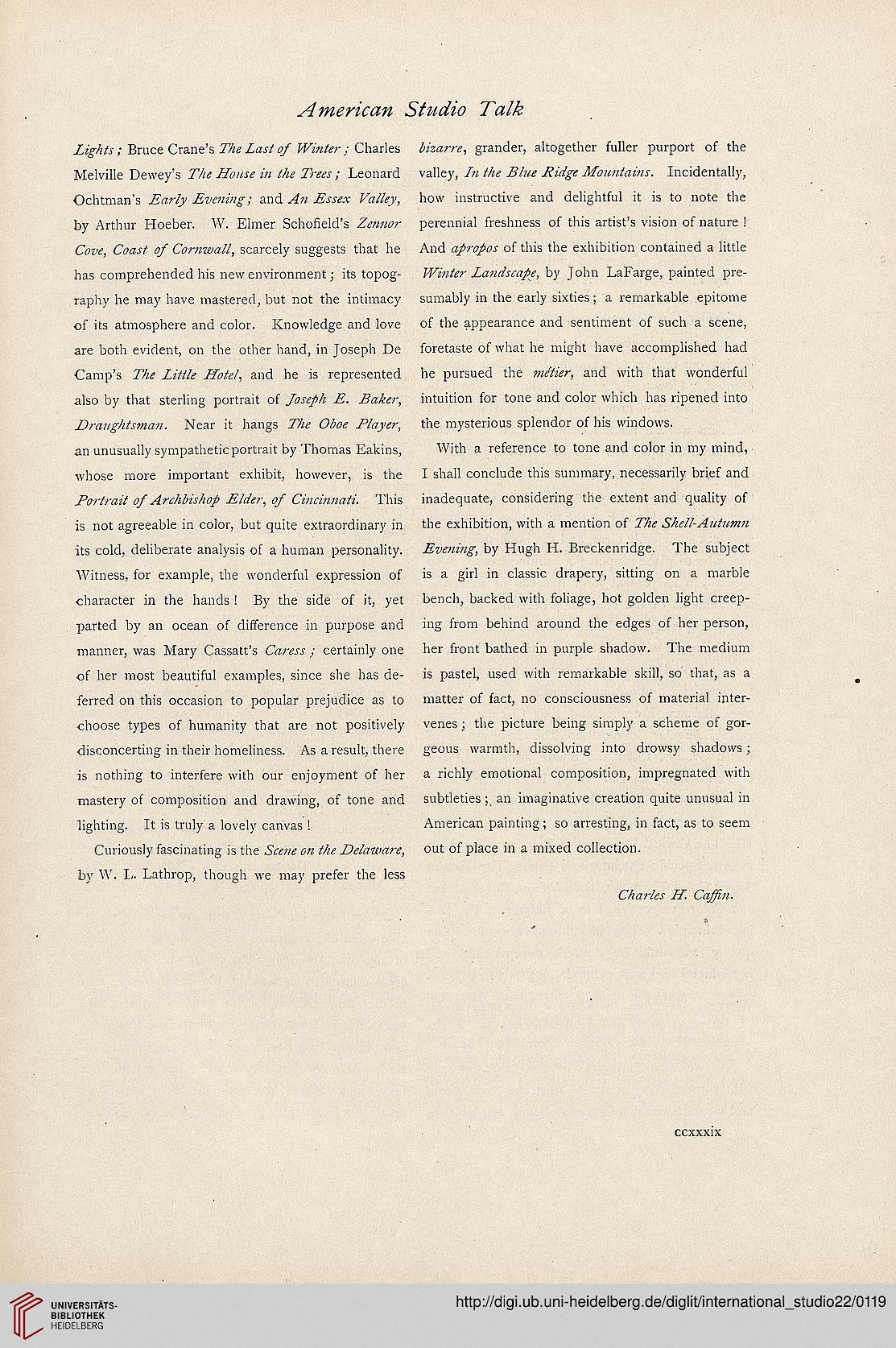 Zz^Z; Bruce Crane's 7%^ZtM/<y IHz'zzZz'; Charles
Melville Dewey's Zfizzzr^ z'zz //%<? Z*<?^ ,* Leonard
Ochtman's ZzzTVy Zzwlzz^*,' and ^4zz Zyy<?.v Ehz%y,
by Arthur Hoeber. W. Ehner Schofield's Zzzzzzztzz*
<y CcwKzzr/2, scarcely suggests that he
has comprehended his new environment; its topog-
raphy he may have mastered, but not the intimacy
of its atmosphere and color. Knowledge and love
are both evident, on the other hand, in Joseph De
Camp's Zz'ZZ and he is represented
also by that sterling portrait of Z. Z<z2w-,
Zbw/^ZTZzrzzz. Near it hangs Z%z? ZKrtw,
an unusually sympathetic portrait by Thomas Eakins,
whose more important exhibit, however, is the
Zw/zazZ Z/Z?7*, <?/* Zz'zzrz'zzzza/z. This
is not agreeable in color, but quite extraordinary in
its cold, deliberate analysis of a human personality.
Witness, for example, the wonderful expression of
character in the hands ! By the side of it, yet
parted by an ocean of difference in purpose and
manner, was Mary Cassatt's Zz?7W certainly one
of her most beautiful examples, since she has de-
ferred on this occasion to popular prejudice as to
choose types of humanity that are not positively
disconcerting in their homeliness. As a result, there
is nothing to interfere with our enjoyment of her
mastery of composition and drawing, of tone and
lighting. It is truly a lovely canvas !
Curiously fascinating is the Zzw/.? z;zz ZZ<%7z?w^,
by W. I,. Lathrop, though we may prefer the less

%zs%7*/*<?, grander, altogether fuller purport of the
valley, Zz Z/zzz? Zz'z^y ^Zzzzzz/zzz'zzr. Incidentally,
how instructive and delightful it is to note the
perennial freshness of this artist's vision of nature !
And of this the exhibition contained a little
fH'7/%z7*Z<z7zZ<rzz^<?, by John LaFarge, painted pre-
sumably in the early sixties; a remarkable epitome
of the appearance and sentiment of such a scene,
foretaste of what he might have accomplished had
he pursued the 77zZzZ, and with that wonderful
intuition for tone and color which has ripened into
the mysterious splendor of his windows.
With a reference to tone and color in my mind,
I shall conclude this summary, necessarily brief and
inadequate, considering the extent and quality of
the exhibition, with a mention of Z%<? Z^Z/-^4zz2zz77Z7Z
Zwzzzzz^, by Hugh H. Breckenridge. The subject
is a girl in classic drapery, sitting on a marble
bench, backed with foliage, hot golden light creep-
ing from behind around the edges of her person,
her front bathed in purple shadow. The medium
is pastel, used with remarkable skill, so that, as a
matter of fact, no consciousness of material inter-
venes ; the picture being simply a scheme of gor-
geous warmth, dissolving into drowsy shadows;
a richly emotional composition, impregnated with
subtleties ; an imaginative creation quite unusual in
American painting; so arresting, in fact, as to seem
out of place in a mixed collection.
C^Z77-/^ Zfi Gz^fzz.