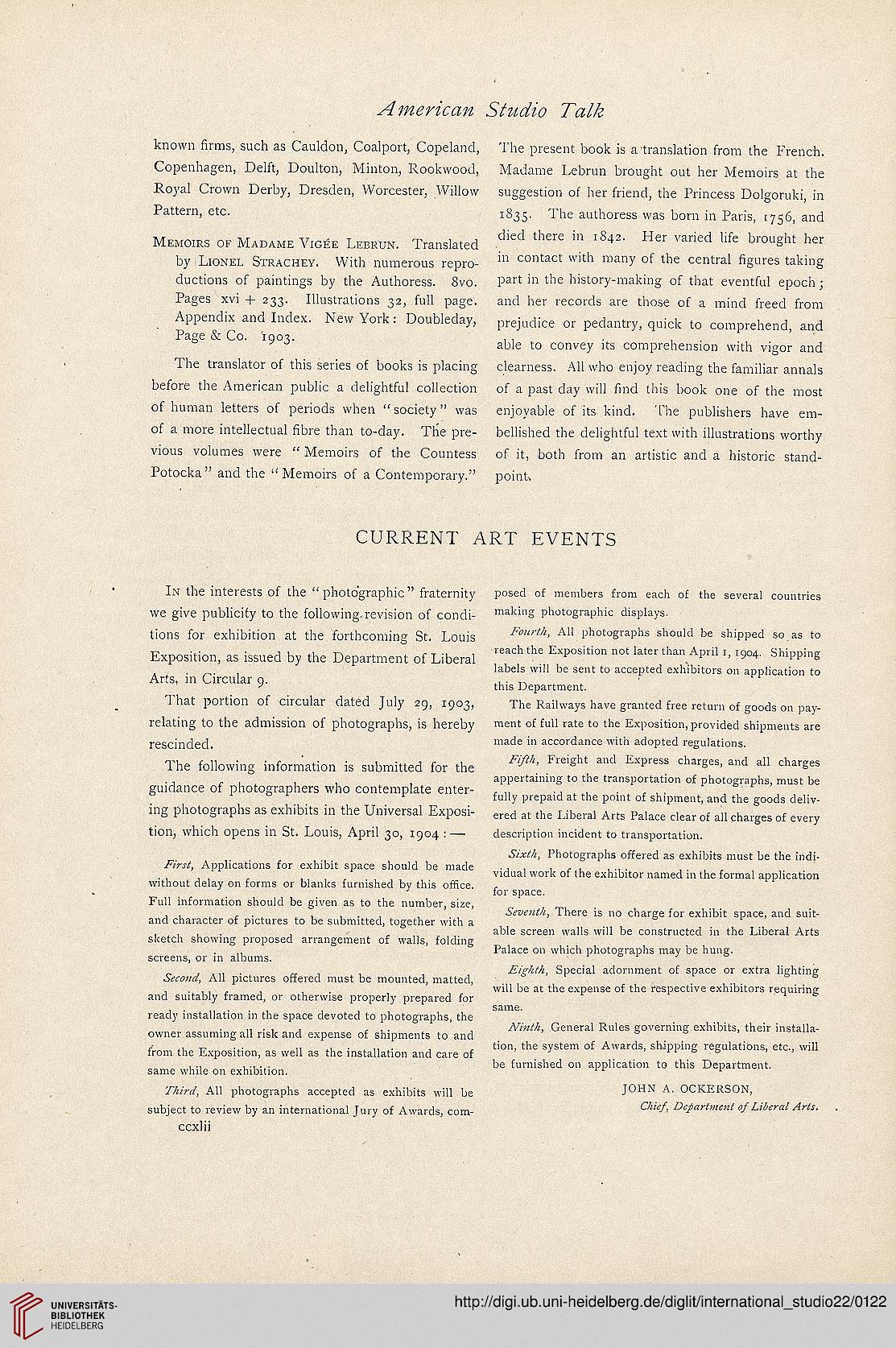 known firms, such as Cauidon, Coalport, Copeland,
Copenhagen, Delft, Doulton, Minton, Rookwood,
Royal Crown Derby, Dresden, Worcester, Willow
Pattern, etc.
MEMOIRS OF MADAME ViGEE LEBRUN. Translated
by LIONEL STRACHEY. With numerous repro-
ductions of paintings by the Authoress. 8vo.
Pages xvi + 233. Illustrations 32, full page.
Appendix and Index. New York: Doubleday,
Page & Co. 1903.
The translator of this series of books is placing
before the American public a delightful collection
of human letters of periods when " society" was
of a more intellectual fibre than to-day. The pre-
vious volumes were " Memoirs of the Countess
Potocka" and the "Memoirs of a Contemporary."

The present book is a translation from the French.
Madame Lebrun brought out her Memoirs at the
suggestion of her friend, the Princess Dolgoruki, in
1833. The authoress was born in Paris, 1756, and
died there in 1842. Her varied life brought her
in contact with many of the central figures taking
part in the history-making of that eventful epoch;
and her records are those of a mind freed from
prejudice or pedantry, quick to comprehend, and
able to convey its comprehension with vigor and
clearness. All who enjoy reading the familiar annals
of a past day will find this book one of the most
enjoyable of its kind. The publishers have em-
bellished the delightful text with illustrations worthy
of it, both from an artistic and a historic stand-
point.

IN the interests of the "photographic" fraternity
we give publicity to the following revision of condi-
tions for exhibition at the forthcoming St. Louis
Exposition, as issued by the Department of Liberal
Arts, in Circular 9.
That portion of circular dated July 29, 1903,
relating to the admission of photographs, is hereby
rescinded.
The following information is submitted for the
guidance of photographers who contemplate enter-
ing photographs as exhibits in the Universal Exposi-
tion, which opens in St. Louis, April 30, 1904 : —
A77-.SV, Applications for exhibit space should be made
without delay on forms or blanks furnished by this office.
Full information should be given as to the number, size,
and character of pictures to be submitted, together with a
sketch showing proposed arrangement of walls, folding
screens, or in albums.
-SrroMaf, All pictures offered must be mounted, matted,
and suitably framed, or otherwise properly prepared for
ready installation in the space devoted to photographs, the
owner assuming all risk and expense of shipments to and
from the Exposition, as well as the installation and care of
same while on exhibition.
THAaf, All photographs accepted as exhibits will be
subject to review by an international Jury of Awards, com-
ccxiii

posed of members from each of the several countries
making photographic displays.
AH photographs should be shipped so as to
reach the Exposition not later than April 1, 1^04. Shipping
labels will be sent to accepted exhibitors on application to
this Department.
The Railways have granted free return of goods on pay-
ment of full rate to the Exposition, provided shipments are
made in accordance with adopted regulations.
A//M, Freight and Express charges, and all charges
appertaining to the transportation of photographs, must be
fully prepaid at the point of shipment, and the goods deliv-
ered at the Liberal Arts Palace clear of all charges of every
description incident to transportation.
A/aV/S, Photographs offered as exhibits must be the indi-
vidual work of the exhibitor named in the formal application
for space.
There is no charge for exhibit space, and suit-
able screen walls will be constructed in the Liberal Arts
Palace on which photographs may be hung.
Special adornment of space or extra lighting
will be at the expense of the respective exhibitors requiring
same.
General Rules governing exhibits, their installa-
tion. the system of Awards, shipping regulations, etc., will
be furnished on application to this Department.
JOHN A. OCKERSON,