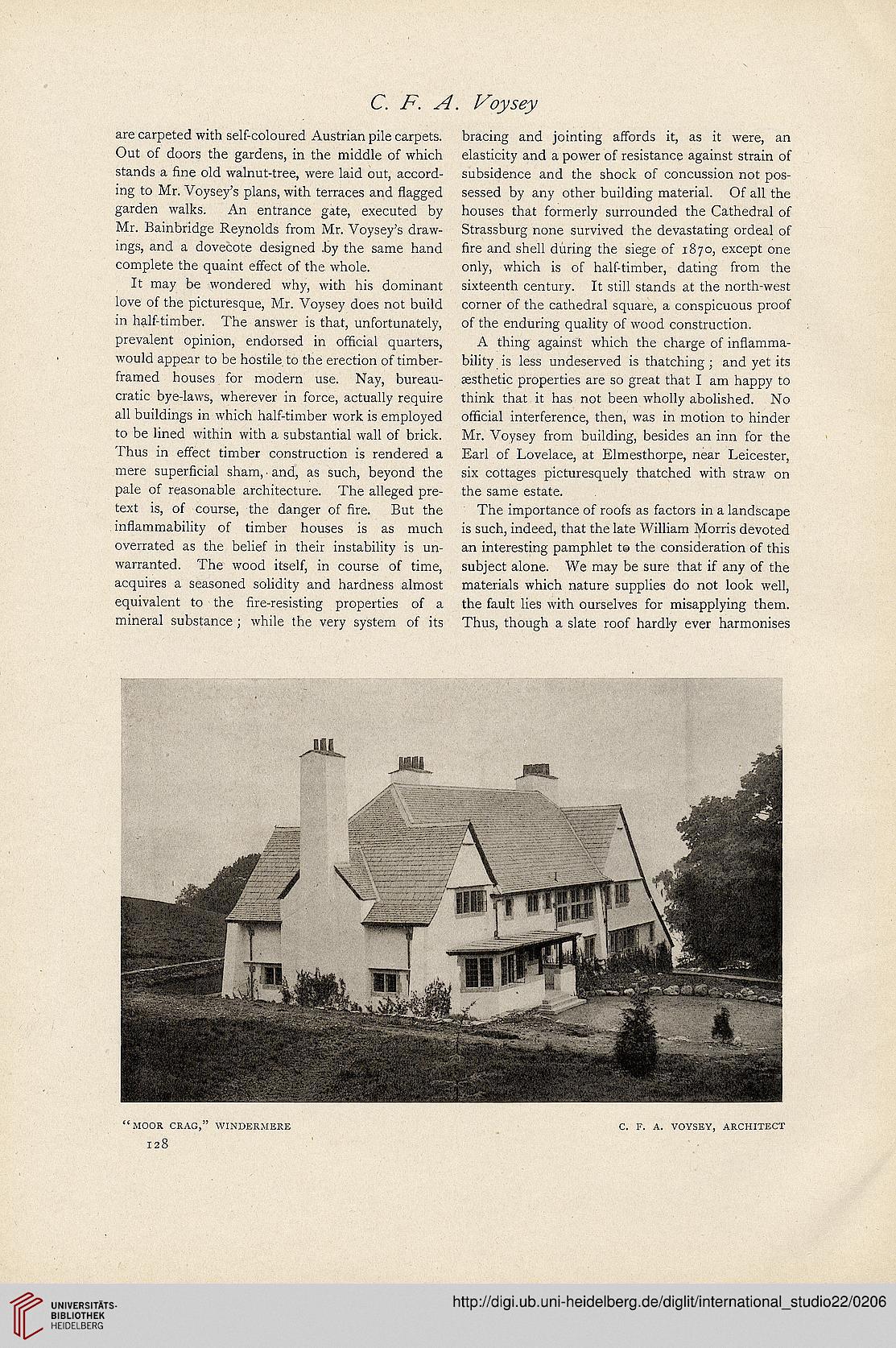 are carpeted with self-coloured Austrian pile carpets.
Out of doors the gardens, in the middle of which
stands a fine old walnut-tree, were laid out, accord-
ing to Mr. Voysey's plans, with terraces and flagged
garden walks. An entrance gate, executed by
Mr. Bainbridge Reynolds from Mr. Voysey's draw-
ings, and a dovecote designed by the same hand
complete the quaint effect of the whole.
It may be wondered why, with his dominant
love of the picturesque, Mr. Voysey does not build
in half-timber. The answer is that, unfortunately,
prevalent opinion, endorsed in official quarters,
would appear to be hostile to the erection of timber-
framed houses for modern use. Nay, bureau-
cratic bye-laws, wherever in force, actually require
all buildings in which half-timber work is employed
to be lined within with a substantial wall of brick.
Thus in effect timber construction is rendered a
mere superficial sham, and, as such, beyond the
pale of reasonable architecture. The alleged pre-
text is, of course, the danger of fire. But the
inflammability of timber houses is as much
overrated as the belief in their instability is un-
warranted. The wood itself, in course of time,
acquires a seasoned solidity and hardness almost
equivalent to the fire-resisting properties of a
mineral substance ; while the very system of its

bracing and jointing affords it, as it were, an
elasticity and a power of resistance against strain of
subsidence and the shock of concussion not pos-
sessed by any other building material. Of all the
houses that formerly surrounded the Cathedral of
Strassburg none survived the devastating ordeal of
fire and shell during the siege of iSyo, except one
only, which is of half-timber, dating from the
sixteenth century. It still stands at the north-west
corner of the cathedral square, a conspicuous proof
of the enduring quality of wood construction.
A thing against which the charge of inflamma-
bility is less undeserved is thatching; and yet its
aesthetic properties are so great that I am happy to
think that it has not been wholly abolished. No
official interference, then, was in motion to hinder
Mr. Voysey from building, besides an inn for the
Earl of Lovelace, at Elmesthorpe, near Leicester,
six cottages picturesquely thatched with straw on
the same estate.
The importance of roofs as factors in a landscape
is such, indeed, that the late William Morris devoted
an interesting pamphlet to the consideration of this
subject alone. We may be sure that if any of the
materials which nature supplies do not look well,
the fault lies with ourselves for misapplying them.
Thus, though a slate roof hardly ever harmonises