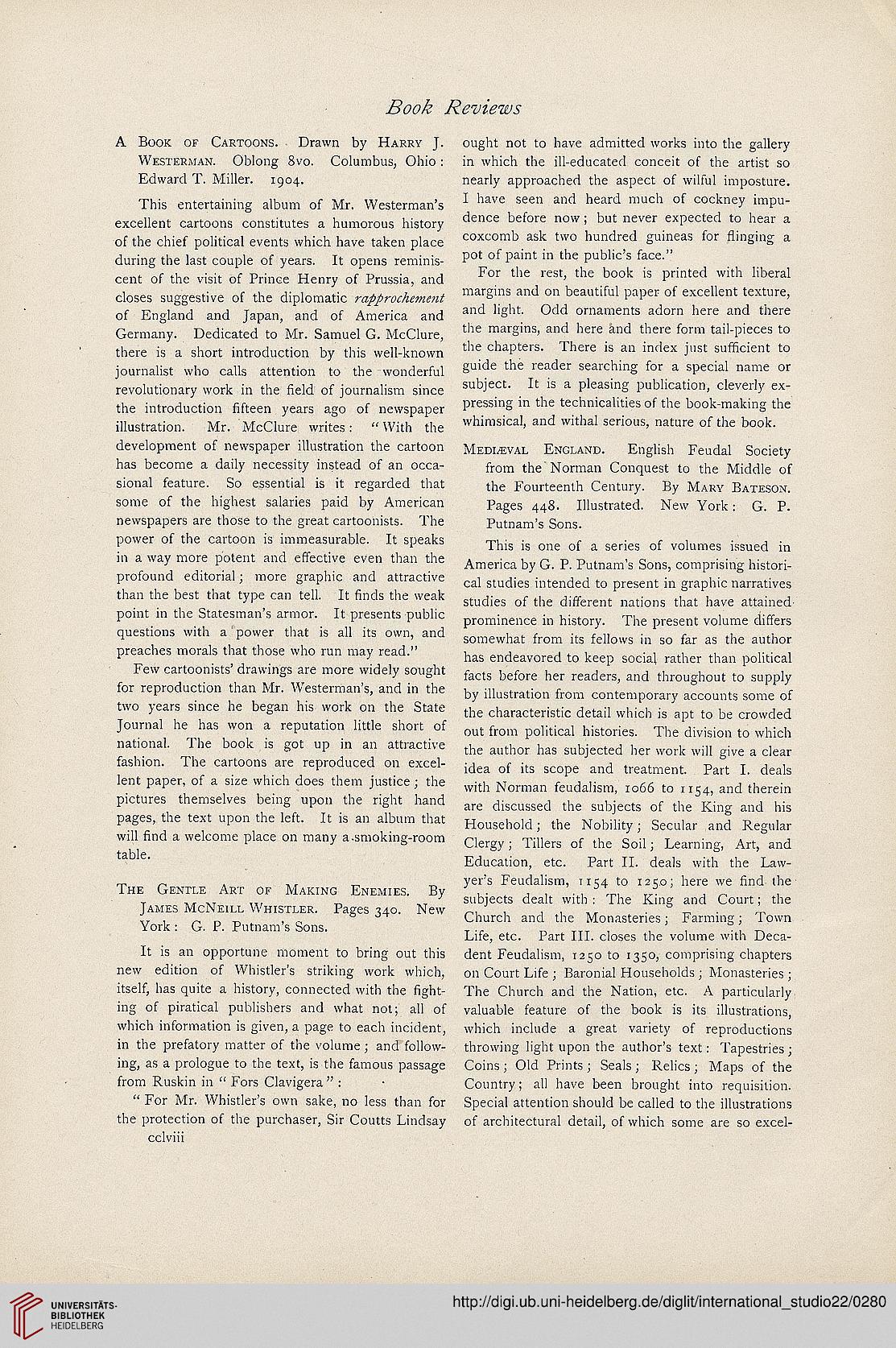 A BOOK OF CARTOONS. Drawn by HARRY J.
WESTERMAN. Oblong 8vo. Columbus, Ohio:
Edward T. Miller. 1^04.
This entertaining album of Mr. Westerman's
excellent cartoons constitutes a humorous history
of the chief political events which have taken place
during the last couple of years. It opens reminis-
cent of the visit of Prince Henry of Prussia, and
closes suggestive of the diplomatic
of England and Japan, and of America and
Germany. Dedicated to Mr. Samuel G. McClure,
there is a short introduction by this well-known
journalist who calls attention to the wonderful
revolutionary work in the held of journalism since
the introduction fifteen years ago of newspaper
illustration. Mr. McClure writes: " With the
development of newspaper illustration the cartoon
has become a daily necessity instead of an occa-
sional feature. So essential is it regarded that
some of the highest salaries paid by American
newspapers are those to the great cartoonists. The
power of the cartoon is immeasurable. It speaks
in a way more potent and effective even than the
profound editorial; more graphic and attractive
than the best that type can tell. It finds the weak
point in the Statesman's armor. It presents public
questions with a power that is all its own, and
preaches morals that those who run may read."
Few cartoonists' drawings are more widely sought
for reproduction than Mr. Westerman's, and in the
two years since he began his work on the State
Journal he has won a reputation little short of
national. The book is got up in an attractive
fashion. The cartoons are reproduced on excel-
lent paper, of a size which does them justice; the
pictures themselves being upon the right hand
pages, the text upon the left. It is an album that
will find a welcome place on many a.smoking-room
table.
THE GENTLE ART OF MAKING ENEMIES. By
JAMES McNEiLt WHISTLER. Pages 340. New
York : G. P. Putnam's Sons.
It is an opportune moment to bring out this
new edition of Whistler's striking work which,
itself, has quite a history, connected with the fight-
ing of piratical publishers and what not; all of
which information is given, a page to each incident,
in the prefatory matter of the volume; and follow-
ing, as a prologue to the text, is the famous passage
from Ruskin in " Fors Clavigera " :
" For Mr. Whistler's own sake, no less than for
the protection of the purchaser, Sir Coutts Lindsay
cclviii

ought not to have admitted works into the gallery
in which the ill-educated conceit of the artist so
nearly approached the aspect of wilful imposture.
I have seen and heard much of cockney impu-
dence before now ; but never expected to hear a
coxcomb ask two hundred guineas for flinging a
pot of paint in the public's face."
For the rest, the book is printed with liberal
margins and on beautiful paper of excellent texture,
and light. Odd ornaments adorn here and there
the margins, and here and there form tail-pieces to
the chapters. There is an index just sufficient to
guide the reader searching for a special name or
subject. It is a pleasing publication, cleverly ex-
pressing in the technicalities of the book-making the
whimsical, and withal serious, nature of the book.
MEDIAEVAL ENGLAND. English Feudal Society
from the Norman Conquest to the Middle of
the Fourteenth Century. By MARY BATESON.
Pages 448. Illustrated. New York: G. P.
Putnam's Sons.
This is one of a series of volumes issued in
America by G. P. Putnam's Sons, comprising histori-
cal studies intended to present in graphic narratives
studies of the different nations that have attained
prominence in history. The present volume differs
somewhat from its fellows in so far as the author
has endeavored to keep social rather than political
facts before her readers, and throughout to supply
by illustration from contemporary accounts some of
the characteristic detail which is apt to be crowded
out from political histories. The division to which
the author has subjected her work will give a clear
idea of its scope and treatment. Part 1. deals
with Norman feudalism, 1066 to 1134, and therein
are discussed the subjects of the King and his
Household; the Nobility; Secular and Regular
Clergy; Tillers of the Soil; Learning, Art, and
Education, etc. Part II. deals with the Law-
yer's Feudalism, 1134 to 1250; here we find the
subjects dealt with : The King and Court; the
Church and the Monasteries; Farming; Town
Life, etc. Part III. closes the volume with Deca-
dent Feudalism, 1250 to 1350, comprising chapters
on Court Life ; Baronial Households ; Monasteries ;
The Church and the Nation, etc. A particularly
valuable feature of the book is its illustrations,
which include a great variety of reproductions
throwing light upon the author's text: Tapestries;
Coins ; Old Prints ; Seals ; Relics ; Maps of the
Country; all have been brought into requisition.
Special attention should be called to the illustrations
of architectural detail, of which some are so excel-