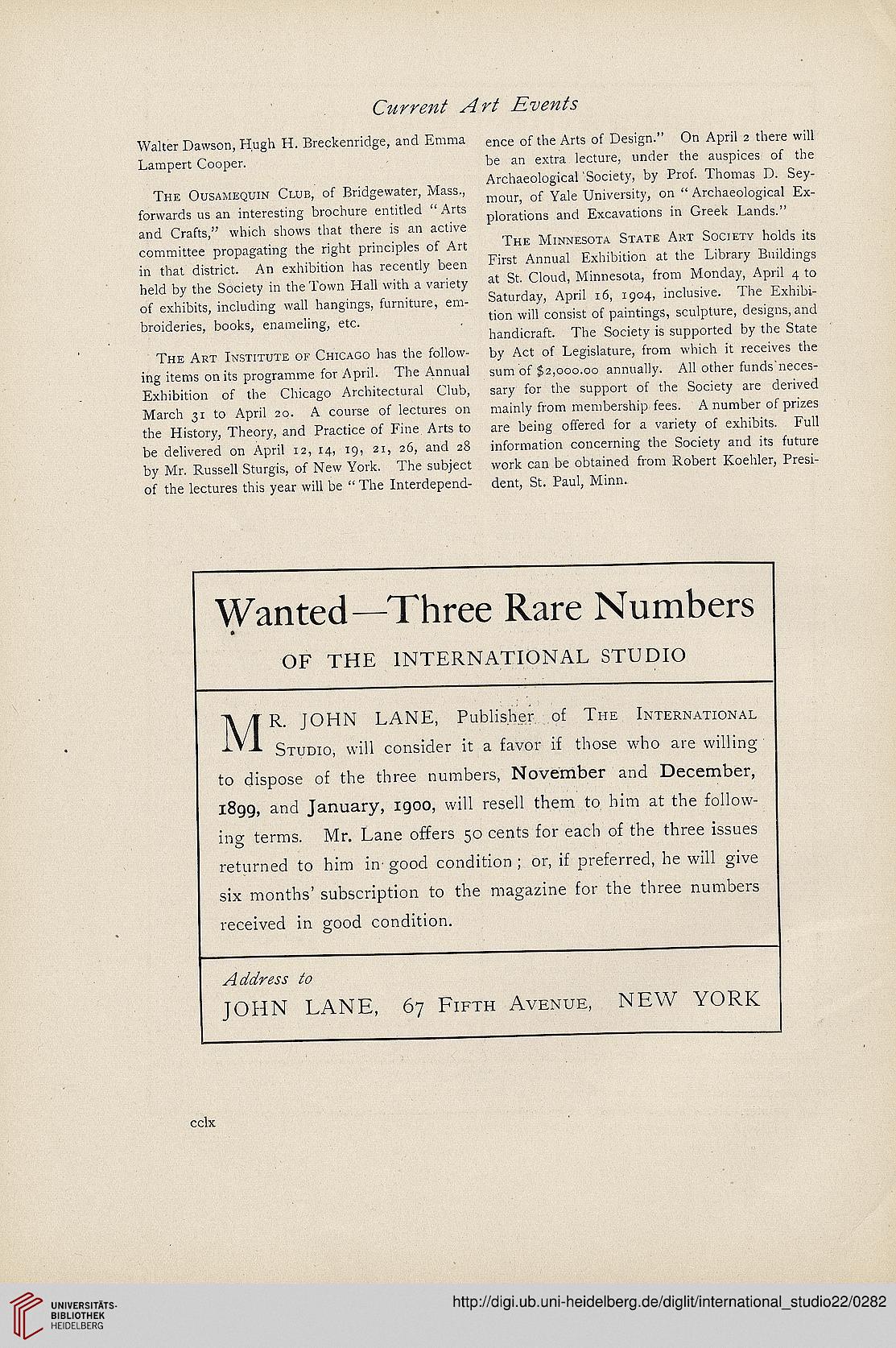 Walter Dawson, Hugh H. Breckenridge, and Emma
Lampert Cooper.
THE OusAMEQUiN CLUB, of Bridgewater, Mass.,
forwards us an interesting brochure entitled " Arts
and Crafts," which shows that there is an active
committee propagating the right principles of Art
in that district. An exhibition has recently been
held by the Society in the Town Hall with a variety
of exhibits, including wall hangings, furniture, em-
broideries, books, enameling, etc.
THE ART INSTITUTE OF CHICAGO has the follow-
ing items on its programme for April. The Annual
Exhibition of the Chicago Architectural Club,
March 31 to April 20. A course of lectures on
the History, Theory, and Practice of Fine Arts to
be delivered on April 12, 14, 19, 21, 26, and 28
by Mr. Russell Sturgis, of New York. The subject
of the lectures this year will be " The Interdepend-

ence of the Arts of Design." On April 2 there will
be an extra lecture, under the auspices of the
Archaeological Society, by Prof. Thomas D. Sey-
mour, of Yale University, on " Archaeological Ex-
plorations and Excavations in Greek Lands."
THE MINNESOTA STATE ART SOCIETY holds its
First Annual Exhibition at the Library Buildings
at St. Cloud, Minnesota, from Monday, April 4 to
Saturday, April 16, 1904, inclusive. The Exhibi-
tion will consist of paintings, sculpture, designs, and
handicraft. The Society is supported by the State
by Act of Legislature, from which it receives the
sum of $2,000.00 annually. AH other funds'neces-
sary for the support of the Society are derived
mainly from membership fees. A number of prizes
are being offered for a variety of exhibits. Full
information concerning the Society and its future
work can be obtained from Robert Koehler, Presi-
dent, St. Paul, Minn.

A /JR. JOHN LANE, Publisher of TuE INTERNATIONAL
STUDIO, will consider it a favor if those who are willing
to dispose of the three numbers, November and December,
l8gg, and January, igoo, will resell them to him at the follow-
ing terms. Mr. Lane offers 50 cents for each of the three issues
returned to him in good condition ; or, if preferred, he will give
six months' subscription to the magazine for the three numbers
received in good condition.
JOHN LANE, 67 FiFTH AvENUE, NEW YORK