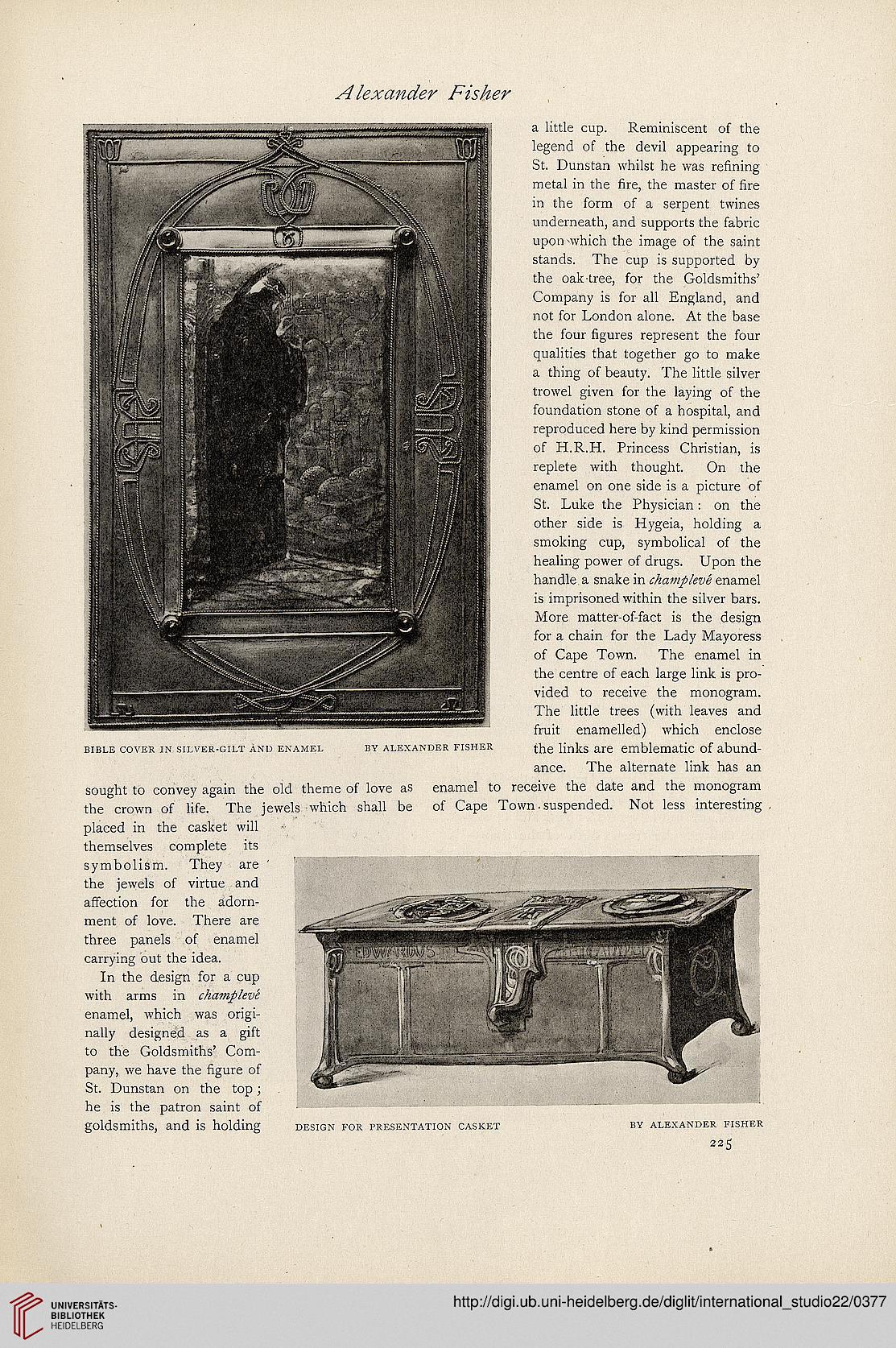 a little cup. Reminiscent of the
legend of the devil appearing to
St. Dunstan whilst he was refining
metal in the fire, the master of fire
in the form of a serpent twines
underneath, and supports the fabric
upon which the image of the saint
stands. The cup is supported by
the oak-tree, for the Goldsmiths'
Company is for all England, and
not for London alone. At the base
the four figures represent the four
qualities that together go to make
a thing of beauty. The little silver
trowel given for the laying of the
foundation stone of a hospital, and
reproduced here by kind permission
of H.R.H. Princess Christian, is
replete with thought. On the
enamel on one side is a picture of
St. Luke the Physician: on the
other side is Hygeia, holding a
smoking cup, symbolical of the
healing power of drugs. Upon the
handle a snake in enamel
is imprisoned within the silver bars.
More matter-of-fact is the design
for a chain for the Lady Mayoress
of Cape Town. The enamel in
the centre of each large link is pro-
vided to receive the monogram.
The little trees (with leaves and
fruit enamelled) which enclose
BtBLE covER iN siLVER-GiLT AND ENAMEL BY ALEXANDER FisHER the links are emblematic of abund-
ance. The alternate link has an
sought to convey again the old theme of love as enamel to receive the date and the monogram
the crown of life. The jewels which shall be of Cape Town suspended. Not less interesting
placed in the casket will
themselves complete its
symbolism. They are
the jewels of virtue and
affection for the adorn-
ment of love. There are
three panels of enamel
carrying out the idea.
In the design for a cup
with arms in
enamel, which was origi-
nally designed as a gift
to the Goldsmiths' Com-
pany, we have the figure of
St. Dunstan on the top;
he is the patron saint of
goldsmiths, and is holding DESIGN FOR PRESENTATION CASKET BY ALEXANDER FISHER
225