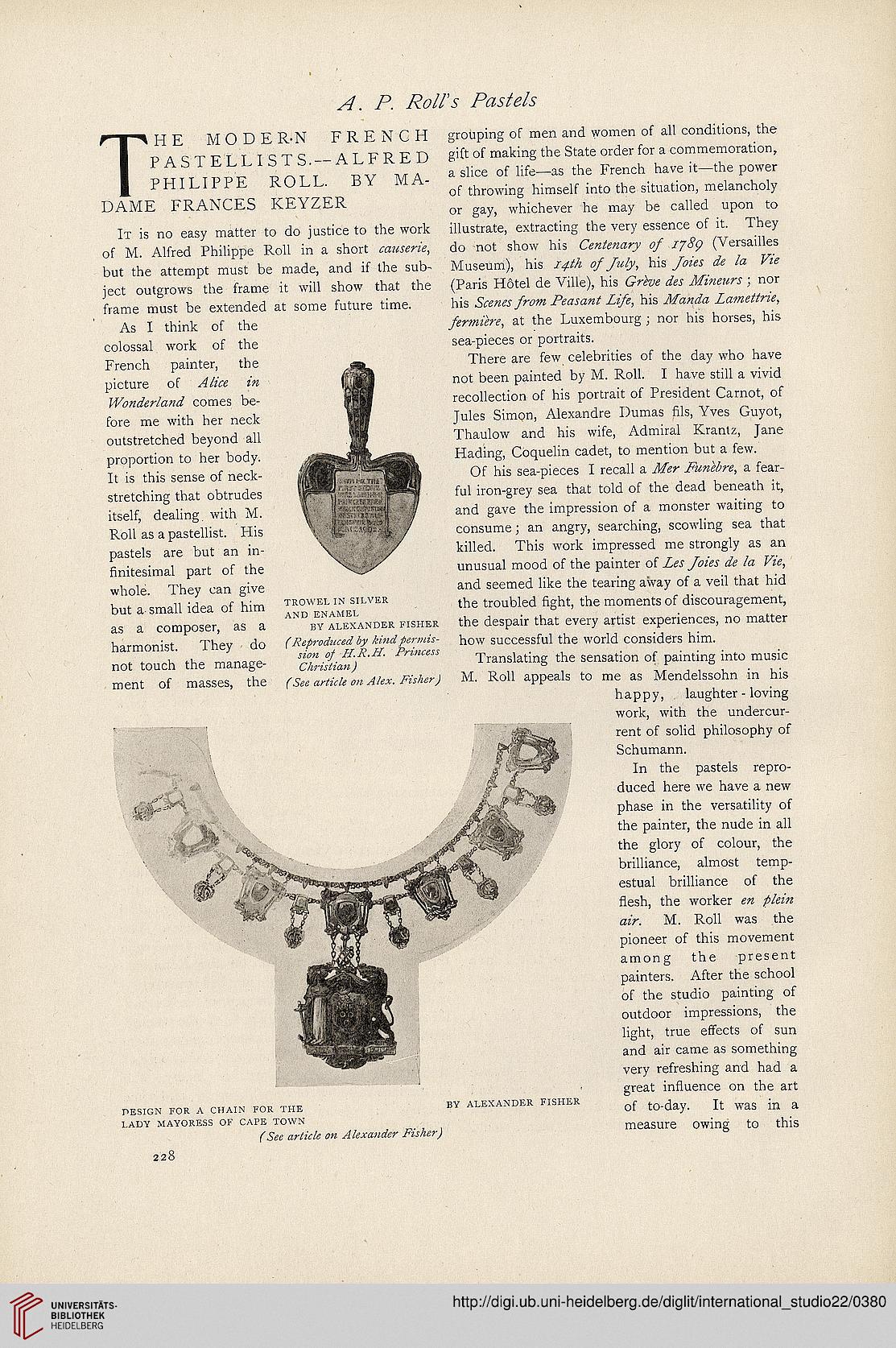 rnr^ HE MODER-N FRENCH
] PAS TELL I STS. —ALFRED
PHILIPPE ROLL. BY MA-
DAME FRANCES KEYZER
IT is no easy matter to do justice to the work
of M. Alfred Philippe Roll in a short cczzzycz-z'c,
but the attempt must be made, and if the sub-
ject outgrows the frame it will show that the
frame must be extended at some future time.
As I think of the
colossal work of the
French painter, the
picture of ^/z'cc z'zz
IFi?zzzfcz*/azzzf comes be-
fore me with her neck
outstretched beyond all
proportion to her body.
It is this sense of neck-
stretching that obtrudes
itself, dealing with M.
Roll as a pastellist. His
pastels are but an in-
finitesimal part of the
whole. They can give
butasmallideaofhim
as a composer, as a
harmonist. They do
not touch the manage-
ment of masses, the

grouping of men and women of all conditions, the
gift of making the State order for a commemoration,
a slice of life—as the French have it—the power
of throwing himself into the situation, melancholy
or gay, whichever he may be called upon to
illustrate, extracting the very essence of it. They
do not show his Cczz/czzzzzy c/* vyA? (Versailles
Museum), his -ryzl% <y*yzz/y, his yi?ZM z&z Az Fz'<r
(Paris Hotel de Ville), his TZ'zzczzz'j'; nor
his Ncczzcy yzwzz Z*czzyzzzz^ Zz/g, his ZAzzzZz Zczzzzc/z'z'z'c,
y9z*zzzzgz*g, at the Luxembourg ; nor his horses, his
sea-pieces or portraits.
There are few celebrities of the day who have
not been painted by M. Roll. I have still a vivid
recollection of his portrait of President Carnot, of
Jules Simon, Alexandre Dumas Ms, Yves Guyot,
Thaulow and his wife, Admiral Krantz, Jane
Hading, Coquelin cadet, to mention but a few.
Of his sea-pieces I recall a Tfcz* Zzzzzc^z-c, a fear-
ful iron-grey sea that told of the dead beneath it,
and gave the impression of a monster waiting to
consume; an angry, searching, scowling sea that
killed. This work impressed me strongly as an
unusual mood of the painter of Z&f yizzA zZ /a Fz'g,
and seemed like the tearing away of a veil that hid
the troubled fight, the moments of discouragement,
the despair that every artist experiences, no matter
how successful the world considers him.
Translating the sensation of painting into music
M. Roll appeals to me as Mendelssohn in his
happy, laughter - loving
work, with the undercur-
rent of solid philosophy of
Schumann.
In the pastels repro-
duced here we have a new
phase in the versatility of
the painter, the nude in all
the glory of colour, the
brilliance, almost temp-
estual brilliance of the
flesh, the worker czz .zVczzz
az'z-. M. Roll was the
pioneer of this movement
among the present
painters. After the school
of the studio painting of
outdoor impressions, the
light, true effects of sun
and air came as something
very refreshing and had a
great influence on the art
of to-day. It was in a
measure owing to this