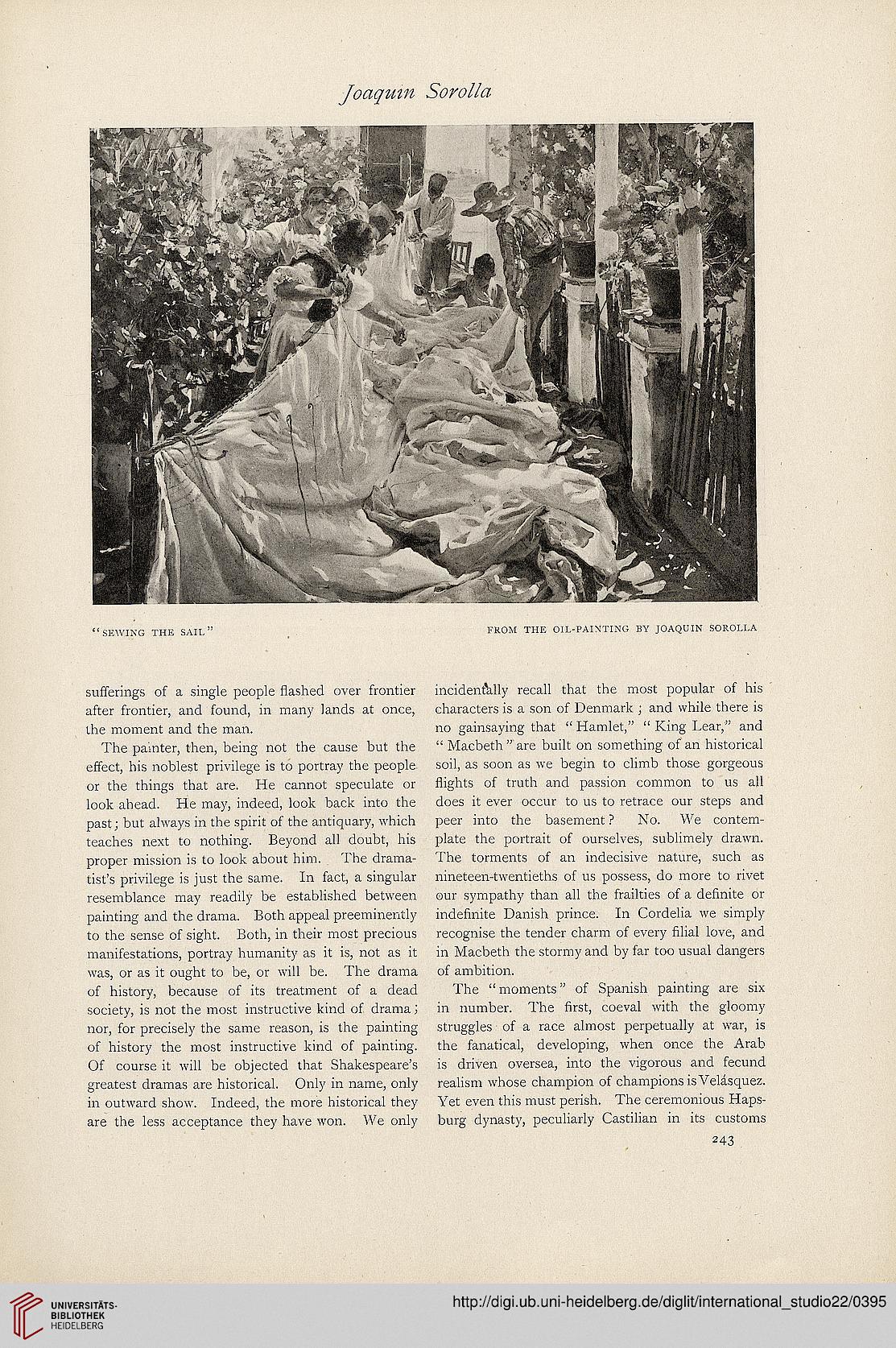 
sufferings of a. single people Hashed over frontier
after frontier, and found, in many lands at once,
the moment and the man.
The pamter, then, being not the cause but the
effect, his noblest privilege is to portray the people
or the things that are. He cannot speculate or
look ahead. He may, indeed, look back into the
past; but always in the spirit of the antiquary, which
teaches next to nothing. Beyond all doubt, his
proper mission is to look about him. The drama-
tist's privilege is just the same. In fact, a singular
resemblance may readily be established between
painting and the drama. Both appeal preeminently
to the sense of sight. Both, in their most precious
manifestations, portray humanity as it is, not as it
was, or as it ought to be, or will be. The drama
of history, because of its treatment of a dead
society, is not the most instructive kind of drama 1
nor, for precisely the same reason, is the painting
of history the most instructive kind of painting.
Of course it will be objected that Shakespeare's
greatest dramas are historical. Only in name, only
in outward show. Indeed, the more historical they
are the less acceptance they have won. We only

incidentally recall that the most popular of his
characters is a son of Denmark ; and while there is
no gainsaying that " Hamlet," " King Lear," and
" Macbeth " are built on something of an historical
soil, as soon as we begin to climb those gorgeous
flights of truth and passion common to us all
does it ever occur to us to retrace our steps and
peer into the basement? No. We contem-
plate the portrait of ourselves, sublimely drawn.
The torments of an indecisive nature, such as
nineteen-twentieths of us possess, do more to rivet
our sympathy than all the frailties of a definite or
indefinite Danish prince. In Cordelia we simply
recognise the tender charm of every filial love, and
in Macbeth the stormy and by far too usual dangers
of ambition.
The " moments" of Spanish painting are six
in number. The first, coeval with the gloomy
struggles of a race almost perpetually at war, is
the fanatical, developing, when once the Arab
is driven oversea, into the vigorous and fecund
realism whose champion of champions is Velasquez.
Yet even this must perish. The ceremonious Haps-
burg dynasty, peculiarly Castilian in its customs
243