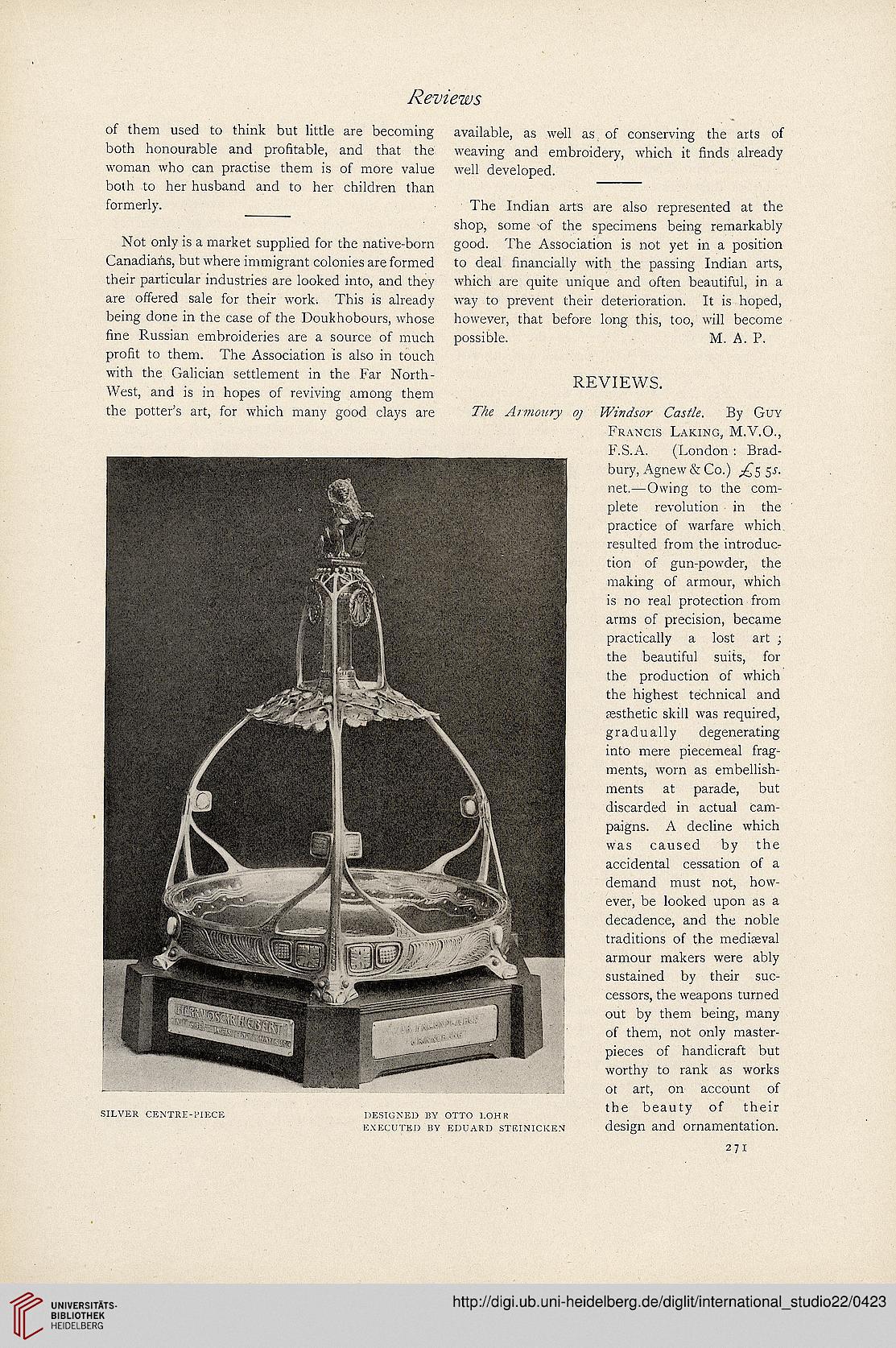 
of them used to think but little are becoming
both honourable and profitable, and that the
woman who can practise them is of more value
both to her husband and to her children than
formerly.
Not only is a market supplied for the native-born
Canadians, but where immigrant colonies are formed
their particular industries are looked into, and they
are offered sale for their work. This is already
being done in the case of the Doukhobours, whose
fine Russian embroideries are a source of much
profit to them. The Association is also in touch
with the Galician settlement in the Far North-
West, and is in hopes of reviving among them
the potter's art, for which many good clays are

available, as well as of conserving the arts of
weaving and embroidery, which it finds already
well developed.
The Indian arts are also represented at the
shop, some of the specimens being remarkably
good. The Association is not yet in a position
to deal financially with the passing Indian arts,
which are quite unique and often beautiful, in a
way to prevent their deterioration. It is hoped,
however, that before long this, too, will become
possible. M. A. P.
REVIEWS.
77^ ^7 77M7/7y H7'77<A'777' By Guy
FRANCIS LAKING, M.V.O.,
F.S.A. (London : Brad-
bury, Agnew & Co.) ^ 5^.
net.—Owing to the com-
plete revolution in the
practice of warfare which
resulted from the introduc-
tion of gun powder, the
making of armour, which
is no real protection from
arms of precision, became
practically a lost art ;
the beautiful suits, for
the production of which
the highest technical and
aesthetic skill was required,
gradually degenerating
into mere piecemeal frag-
ments, worn as embellish-
ments at parade, but
discarded in actual cam-
paigns. A decline which
was caused by the
accidental cessation of a
demand must not, how-
ever, be looked upon as a
decadence, and the noble
traditions of the mediaeval
armour makers were ably
sustained by their suc-
cessors, the weapons turned
out by them being, many
of them, not only master-
pieces of handicraft but
worthy to rank as works
ot art, on account of
the beauty of their
design and ornamentation.