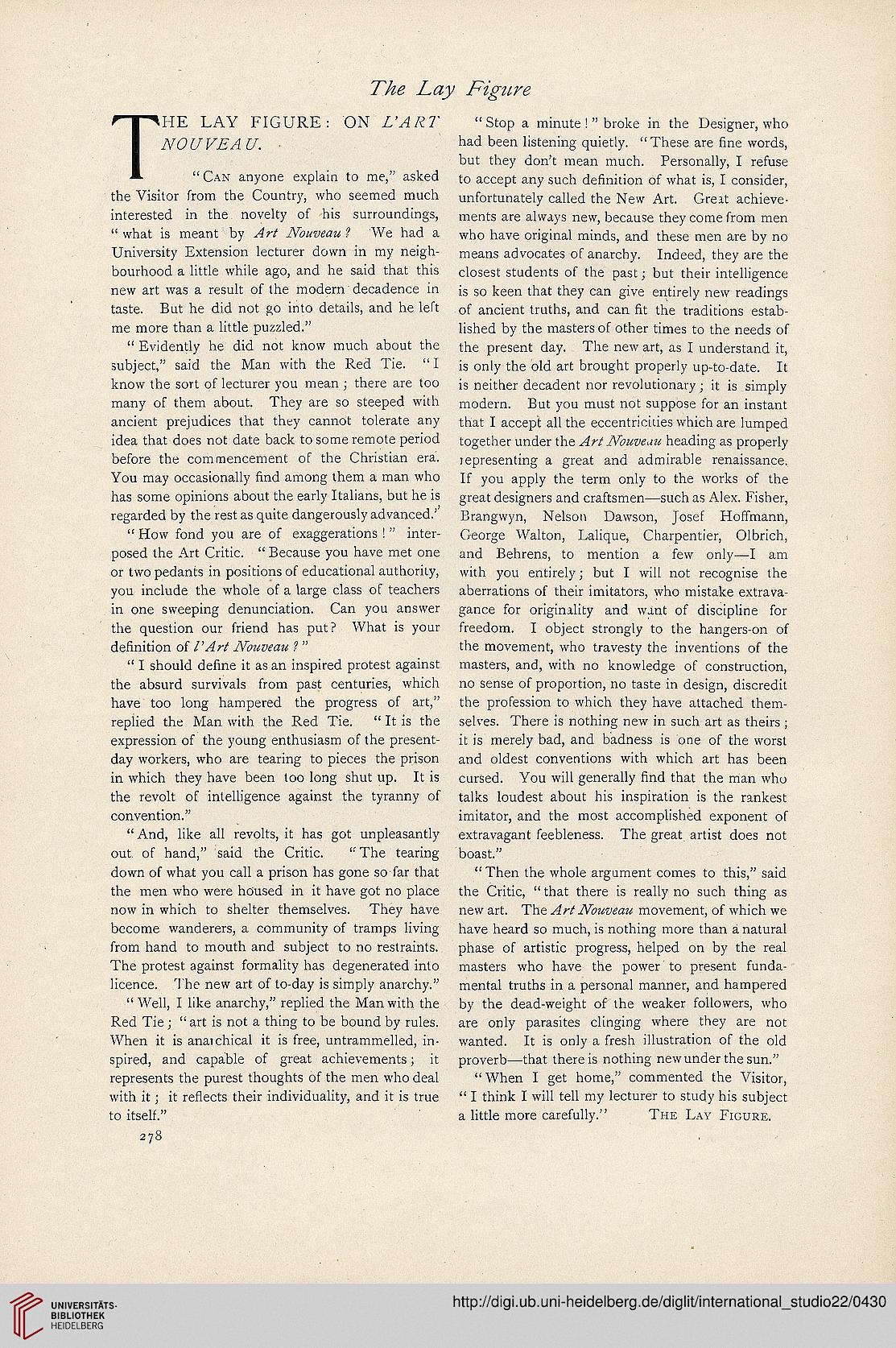 Information about OCR text
71%<?
HE LAY FIGURE: ON
TVUyUEHy.
" CAN anyone explain to me/' asked
the Visitor from the Country, who seemed much
interested in the novelty of his surroundings,
"what is meant by TVwwa'M? We had a
University Extension lecturer down in my neigh-
bourhood a iittie while ago, and he said that this
new art was a resuit of the modern decadence in
taste. But he did not go into detaiis, and he left
me more than a little puzzled."
" Evidently he did not know much about the
subject," said the Man with the Red Tie. "I
know the sort of lecturer you mean ; there are too
many of them about. They are so steeped with
ancient prejudices that they cannot tolerate any
idea that does not date back to some remote period
before the commencement of the Christian era.
You may occasionally find among them a man who
has some opinions about the early Italians, but he is
regarded by the rest as quite dangerously advanced.'
" How fond you are of exaggerations ! " inter-
posed the Art Critic. " Because you have met one
or two pedants in positions of educational authority,
you include the whole of a large class of teachers
in one sweeping denunciation. Can you answer
the question our friend has put ? What is your
definition of WwwaM ? "
" I should define it as an inspired protest against
the absurd survivals from past centuries, which
have too long hampered the progress of art,"
replied the Man with the Red Tie. " It is the
expression of the young enthusiasm of the present-
day workers, who are tearing to pieces the prison
in which they have been too long shut up. It is
the revolt of intelligence against the tyranny of
convention."
" And, like all revolts, it has got unpleasantly
out of hand," said the Critic. " The tearing
down of what you call a prison has gone so far that
the men who were housed in it have got no place
now in which to shelter themselves. They have
become wanderers, a community of tramps living
from hand to mouth and subject to no restraints.
The protest against formality has degenerated into
licence. The new art of to-day is simply anarchy."
" Well, I like anarchy," replied the Man with the
Red Tie ; " art is not a thing to be bound by rules.
When it is anatchical it is free, untrammelled, in-
spired, and capable of great achievements; it
represents the purest thoughts of the men who deal
with it; it reflects their individuality, and it is true
to itself."
278

" Stop a minute ! " broke in the Designer, who
had been listening quietly. " These are fine words,
but they don't mean much. Personally, I refuse
to accept any such definition of what is, I consider,
unfortunately called the New Art. Great achieve-
ments are always new, because they come from men
who have original minds, and these men are by no
means advocates of anarchy. Indeed, they are the
closest students of the past; but their intelligence
is so keen that they can give entirely new readings
of ancient truths, and can fit the traditions estab-
lished by the masters of other times to the needs of
the present day. The new art, as I understand it,
is only the old art brought properly up-to-date. It
is neither decadent nor revolutionary ; it is simply
modern. But you must not suppose for an instant
that I accept all the eccentricities which are lumped
together under the Air/' TWawaM heading as properly
representing a great and admirable renaissance.
If you apply the term only to the works of the
great designers and craftsmen—such as Alex. Fisher,
Brangwyn, Nelson Dawson, Josef Hoffmann,
George Walton, Lalique, Charpentier, Olbrich,
and Behrens, to mention a few only—I am
with you entirely; but I will not recognise the
aberrations of their imitators, who mistake extrava-
gance for originality and want of discipline for
freedom. I object strongly to the hangers-on of
the movement, who travesty the inventions of the
masters, and, with no knowledge of construction,
no sense of proportion, no taste in design, discredit
the profession to which they have attached them-
selves. There is nothing new in such art as theirs ;
it is merely bad, and badness is one of the worst
and oldest conventions with which art has been
cursed. You will generally find that the man who
talks loudest about his inspiration is the rankest
imitator, and the most accomplished exponent of
extravagant feebleness. The great artist does not
boast."
" Then the whole argument comes to this," said
the Critic, " that there is really no such thing as
new art. The H/VTYw&.MM movement, of which we
have heard so much, is nothing more than a natural
phase of artistic progress, helped on by the real
masters who have the power to present funda-
mental truths in a personal manner, and hampered
by the dead-weight of the weaker followers, who
are only parasites clinging where they are not
wanted. It is only a fresh illustration of the old
proverb—that there is nothing newunderthesun."
"When I get home," commented the Visitor,
" I think I will tell my lecturer to study his subject
a little more carefully." THE LAY FtouRE.