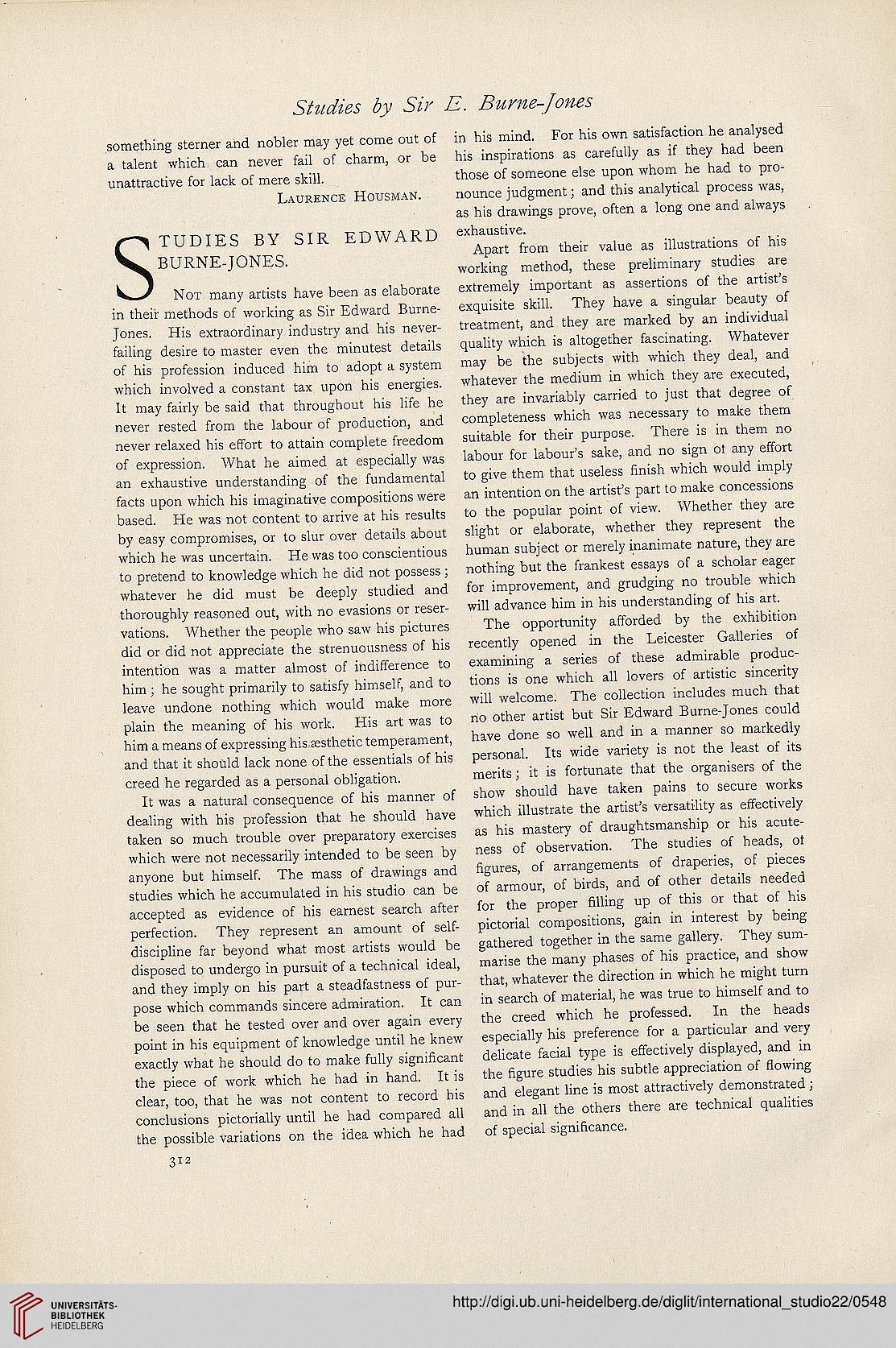 something sterner and nobler may yet come out of
a talent which can never fail of charm, or be
unattractive for lack of mere skill.
LAURENCE HOUSMAN.
TUDIES BY SIR EDWARD
BURNE-JONES.
NOT many artists have been as elaborate
in their methods of working as Sir Edward Burne-
Jones. His extraordinary industry and his never-
failing desire to master even the minutest details
of his profession induced him to adopt a system
which involved a constant tax upon his energies.
It may fairly be said that throughout his life he
never rested from the labour of production, and
never relaxed his effort to attain complete freedom
of expression. What he aimed at especially was
an exhaustive understanding of the fundamental
facts upon which his imaginative compositions were
based. He was not content to arrive at his results
by easy compromises, or to slur over details about
which he was uncertain. He was too conscientious
to pretend to knowledge which he did not possess ;
whatever he did must be deeply studied and
thoroughly reasoned out, with no evasions or reser-
vations. Whether the people who saw his pictures
did or did not appreciate the strenuousness of his
intention was a matter almost of indifference to
him ; he sought primarily to satisfy himself, and to
leave undone nothing which would make more
plain the meaning of his work. His art was to
him a means of expressing his aesthetic temperament,
and that it should lack none of the essentials of his
creed he regarded as a personal obligation.
It was a natural consequence of his manner of
dealing with his profession that he should have
taken so much trouble over preparatory exercises
which were not necessarily intended to be seen by
anyone but himself. The mass of drawings and
studies which he accumulated in his studio can be
accepted as evidence of his earnest search after
perfection. They represent an amount of self-
discipline far beyond what most artists would be
disposed to undergo in pursuit of a technical ideal,
and they imply on his part a steadfastness of pur-
pose which commands sincere admiration. It can
be seen that he tested over and over again every
point in his equipment of knowledge until he knew
exactly what he should do to make fully significant
the piece of work which he had in hand. It is
clear, too, that he was not content to record his
conclusions pictorially until he had compared all
the possible variations on the idea which he had
312

in his mind. For his own satisfaction he analysed
his inspirations as carefully as if they had been
those of someone else upon whom he had to pro-
nounce judgment; and this analytical process was,
as his drawings prove, often a long one and always
exhaustive.
Apart from their value as illustrations of his
working method, these preliminary studies are
extremely important as assertions of the artist's
exquisite skill. They have a singular beauty of
treatment, and they are marked by an individual
quality which is altogether fascinating. Whatever
may be the subjects with which they deal, and
whatever the medium in which they are executed,
they are invariably carried to just that degree of
completeness which was necessary to make them
suitable for their purpose. There is in them no
labour for labour's sake, and no sign ot any effort
to give them that useless finish which would imply
an intention on the artist's part to make concessions
to the popular point of view. Whether they are
slight or elaborate, whether they represent the
human subject or merely inanimate nature, they are
nothing but the frankest essays of a scholar eager
for improvement, and grudging no trouble which
will advance him in his understanding of his art.
The opportunity afforded by the exhibition
recently opened in the Leicester Galleries of
examining a series of these admirable produc-
tions is one which all lovers of artistic sincerity
will welcome. The collection includes much that
no other artist but Sir Edward Burne-Jones could
have done so well and in a manner so markedly
personal. Its wide variety is not the least of its
merits; it is fortunate that the organisers of the
show should have taken pains to secure works
which illustrate the artist's versatility as effectively
as his mastery of draughtsmanship or his acute-
ness of observation. The studies of heads, ot
figures, of arrangements of draperies, of pieces
of armour, of birds, and of other details needed
for the proper filling up of this or that of his
pictorial compositions, gain in interest by being
gathered together in the same gallery. They sum-
marise the many phases of his practice, and show
that, whatever the direction in which he might turn
in search of material, he was true to himself and to
the creed which he professed. In the heads
especially his preference for a particular and very
delicate facial type is effectively displayed, and in
the figure studies his subtle appreciation of flowing
and elegant line is most attractively demonstrated;
and in all the others there are technical qualities
of special significance.