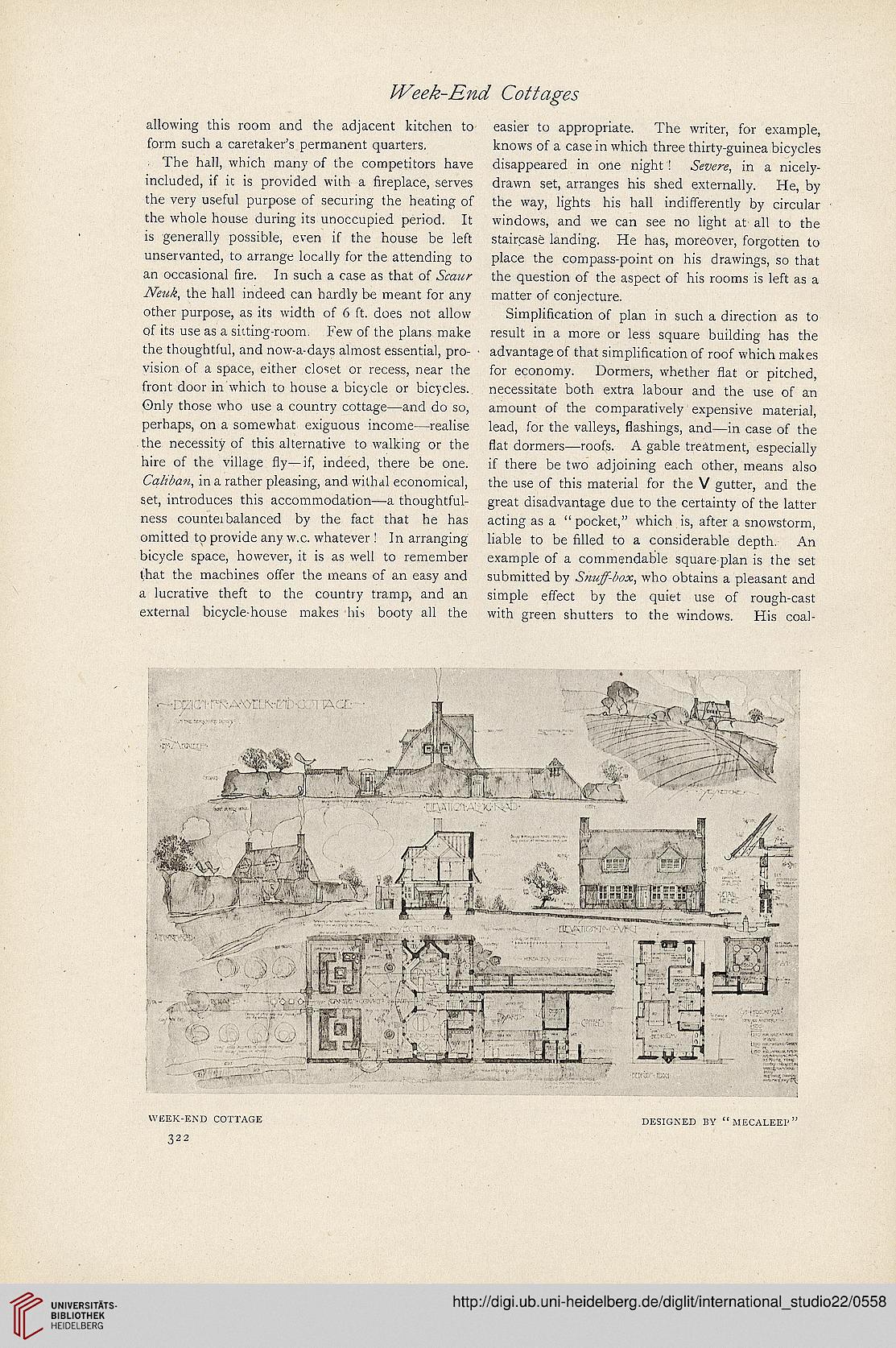 allowing this room and the adjacent kitchen to
form such a caretaker's permanent quarters.
The hail, which many of the competitors have
included, if it is provided with a fireplace, serves
the very useful purpose of securing the heating of
the whole house during its unoccupied period. It
is generally possible, even if the house be left
unservanted, to arrange locally for the attending to
an occasional Bre. In such a case as that of Arazz/*
A^zz^, the hall indeed can hardly be meant for any
other purpose, as its width of 6 ft. does not allow
of its use as a sitting-room. Few of the plans make
the thoughtful, and now a days almost essential, pro-
vision of a space, either closet or recess, near the
front door in which to house a bicycle or bicycles.
Only those who use a country cottage—and do so,
perhaps, on a somewhat exiguous income—realise
the necessity of this alternative to walking or the
hire of the village By—if, indeed, there be one.
Ca/z'Twz, in a rather pleasing, and withal economical,
set, introduces this accommodation—a thoughtful-
ness counterbalanced by the fact that he has
omitted to provide any w.c. whatever ! In arranging
bicycle space, however, it is as well to remember
that the machines offer the means of an easy and
a lucrative theft to the country tramp, and an
external bicycle-house makes his booty all the

easier to appropriate. The writer, for example,
knows of a case in which three thirty-guinea bicycles
disappeared in one night! in a nicely-
drawn set, arranges his shed externally. He, by
the way, lights his hall indifferently by circular
windows, and we can see no light at all to the
staircase landing. He has, moreover, forgotten to
place the compass-point on his drawings, so that
the question of the aspect of his rooms is left as a
matter ofconjecture.
Simplification of plan in such a direction as to
result in a more or less square building has the
advantage of that simplification of roof which makes
for economy. Dormers, whether Bat or pitched,
necessitate both extra labour and the use of an
amount of the comparatively expensive material,
lead, for the valleys, Bashings, and—in case of the
Hat dormers—roofs. A gable treatment, especially
if there be two adjoining each other, means also
the use of this material for the V gutter, and the
great disadvantage due to the certainty of the latter
acting as a " pocket," which is, after a snowstorm,
liable to be Blled to a considerable depth. An
example of a commendable square plan is the set
submitted by .Szzzz^zizw, who obtains a pleasant and
simple effect by the quiet use of rough-cast
with green shutters to the windows. His coal-