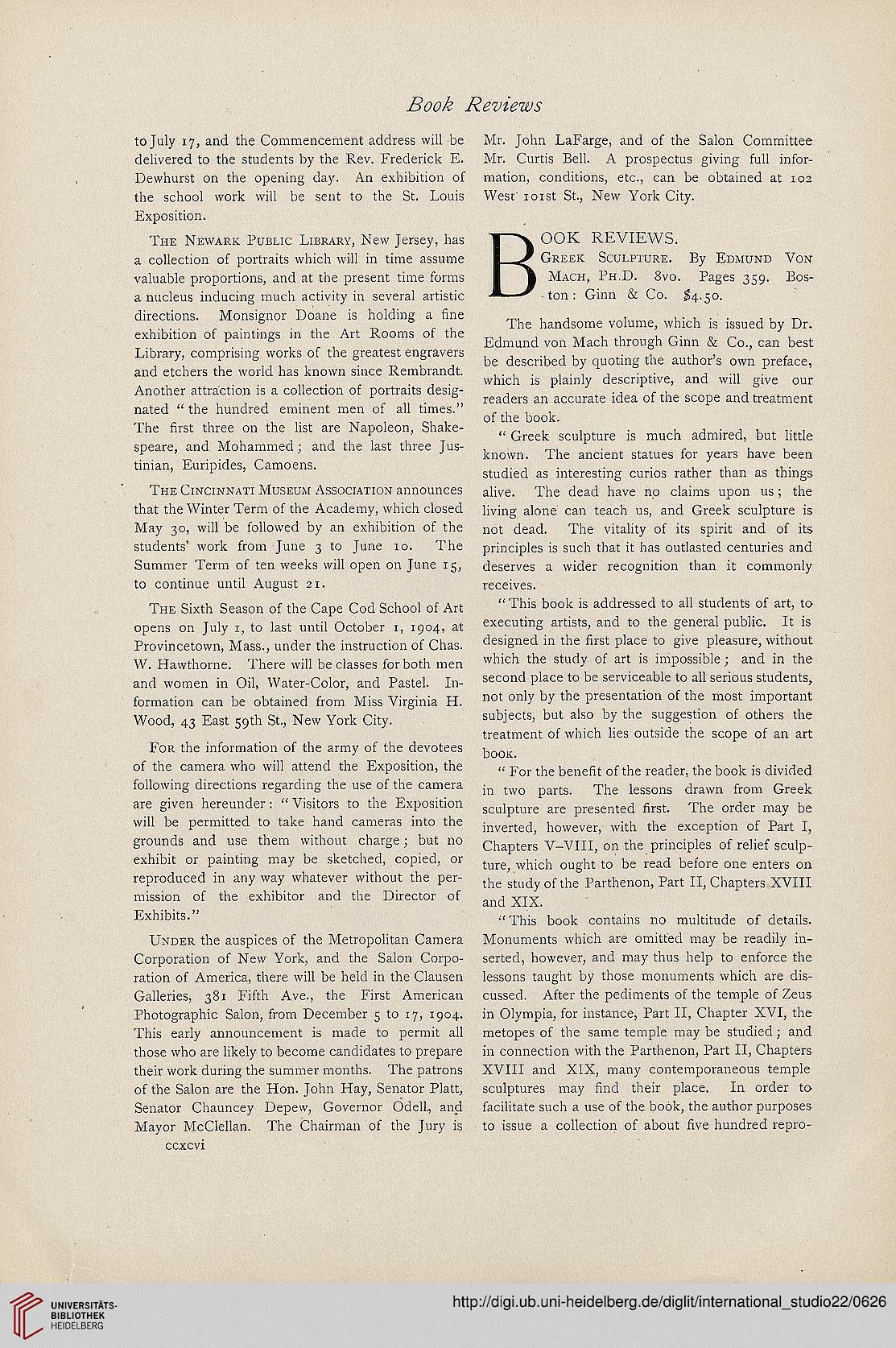 to July ry, and the Commencement address will be
delivered to the students by the Rev. Frederick E.
Dewhurst on the opening day. An exhibition of
the school work will be sent to the St. Louis
Exposition.
THE NEWARK PUBLIC LIBRARY, New Jersey, has
a collection of portraits which will in time assume
valuable proportions, and at the present time forms
a nucleus inducing much activity in several artistic
directions. Monsignor Doane is holding a fine
exhibition of paintings in the Art Rooms of the
Library, comprising works of the greatest engravers
and etchers the world has known since Rembrandt.
Another attraction is a collection of portraits desig-
nated " the hundred eminent men of all times."
The first three on the list are Napoleon, Shake-
speare, and Mohammed; and the last three Jus-
tinian, Euripides, Camoens.
THE CINCINNATI MusEUM ASSOCIATION announces
that the Winter Term of the Academy, which closed
May go, will be followed by an exhibition of the
students' work from June g to June 10. The
Summer Term of ten weeks will open on June ig,
to continue until August 21.
THE Sixth Season of the Cape Cod School of Art
opens on July 1, to last until October 1, 1904, at
Provincetown, Mass., under the instruction of Chas.
W. Hawthorne. There will be classes for both men
and women in Oil, Water-Color, and Pastel. In-
formation can be obtained from Miss Virginia H.
Wood, 43 East 59th St., New York City.
FOR the information of the army of the devotees
of the camera who will attend the Exposition, the
following directions regarding the use of the camera
are given hereunder: " Visitors to the Exposition
will be permitted to take hand cameras into the
grounds and use them without charge; but no
exhibit or painting may be sketched, copied, or
reproduced in any way whatever without the per-
mission of the exhibitor and the Director of
Exhibits."
UNDER the auspices of the Metropolitan Camera
Corporation of New York, and the Salon Corpo-
ration of America, there will be held in the Clausen
Galleries, g8r Fifth Ave., the First American
Photographic Salon, from December g to iy, 1904.
This early announcement is made to permit all
those who are likely to become candidates to prepare
their work during the summer months. The patrons
of the Salon are the Hon. John Hay, Senator Platt,
Senator Chauncey Depew, Governor Odell, and
Mayor McClellan. The Chairman of the Jury is

Mr. John LaFarge, and of the Salon Committee
Mr. Curtis Bell. A prospectus giving full infor-
mation, conditions, etc., can be obtained at 102
West' 101st St., New York City.
'g—^ OOK REVIEWS.
[ GREEK SCULPTURE. By EDMUND VON
&'! ^ MACH, PH.D. 8vo. Pages gg9. Bos-
^ ton: Ginn & Co. %4.go.
The handsome volume, which is issued by Dr.
Edmund von Mach through Ginn & Co., can best
be described by quoting the author's own preface,
which is plainly descriptive, and will give our
readers an accurate idea of the scope and treatment
of the book.
" Greek sculpture is much admired, but little
known. The ancient statues for years have been
studied as interesting curios rather than as things
alive. The dead have no claims upon us ; the
living alone can teach us, and Greek sculpture is
not dead. The vitality of its spirit and of its
principles is such that it has outlasted centuries and
deserves a wider recognition than it commonly
receives.
" This book is addressed to all students of art, to
executing artists, and to the general public. It is
designed in the first place to give pleasure, without
which the study of art is impossible; and in the
second place to be serviceable to all serious students,
not only by the presentation of the most important
subjects, but also by the suggestion of others the
treatment of which lies outside the scope of an art
boon.
" For the benefit of the reader, the book is divided
in two parts. The lessons drawn from Greek
sculpture are presented first. The order may be
inverted, however, with the exception of Part I,
Chapters V-YHI, on the principles of relief sculp-
ture, which ought to be read before one enters on
the study of the Parthenon, Part II, Chapters XVIII
and XIX.
" This book contains no multitude of details.
Monuments which are omitted may be readily in-
serted, however, and may thus help to enforce the
lessons taught by those monuments which are dis-
cussed. After the pediments of the temple of Zeus
in Olympia, for instance, Part II, Chapter XVI, the
metopes of the same temple may be studied; and
in connection with the Parthenon, Part II, Chapters
XVIII and XIX, many contemporaneous temple
sculptures may find their place. In order to
facilitate such a use of the book, the author purposes
to issue a collection of about five hundred repro-