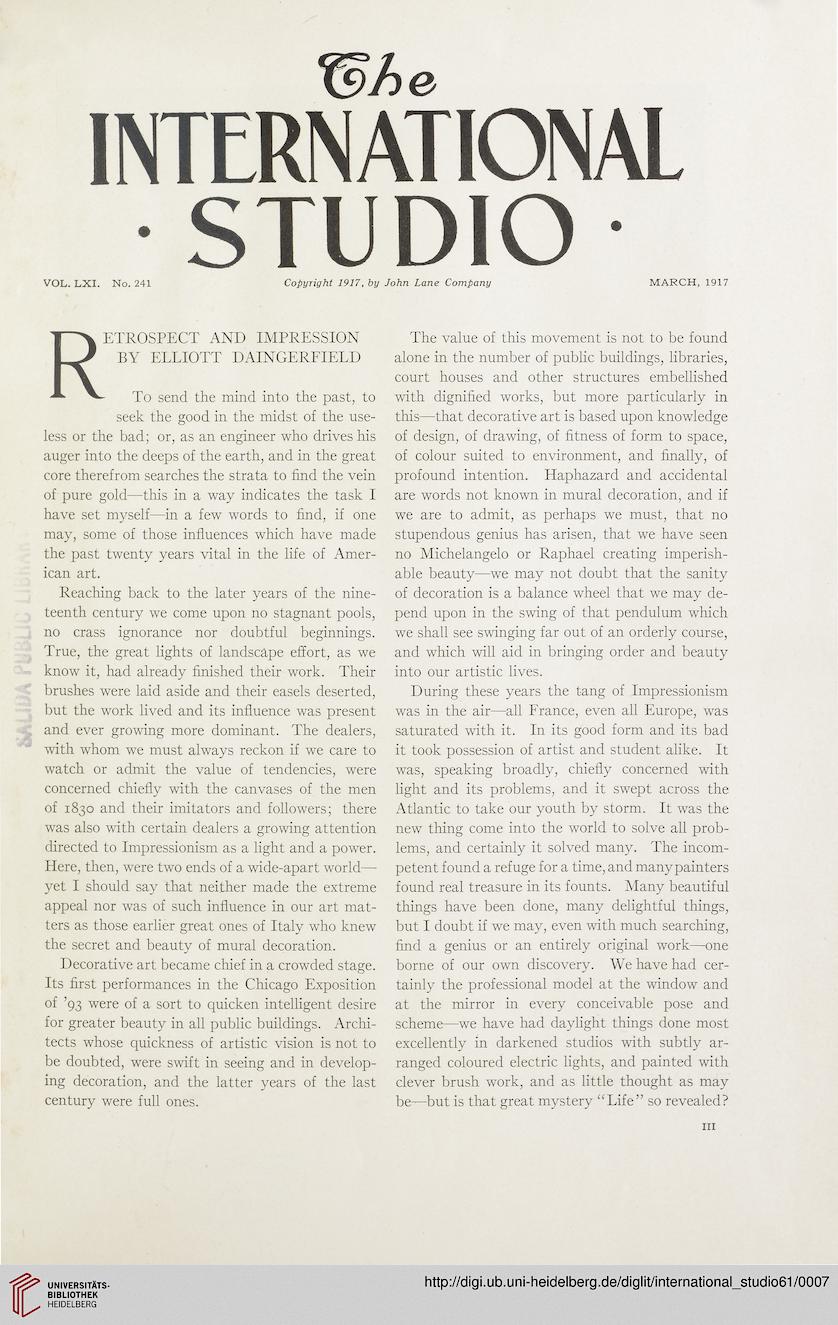 Retrospect and impression
BY ELLIOTT DAINGERFIELD
To send the mind into the past, to
seek the good in the midst of the use-
less or the bad; or, as an engineer who drives his
auger into the deeps of the earth, and in the great
core therefrom searches the strata to find the vein
of pure gold—this in a way indicates the task I
have set myself—in a few words to find, if one
may, some of those influences which have made
the past twenty years vital in the life of Amer-
ican art.
Reaching back to the later years of the nine-
teenth century we come upon no stagnant pools,
no crass ignorance nor doubtful beginnings.
True, the great lights of landscape effort, as we
know it, had already finished their work. Their
brushes were laid aside and their easels deserted,
but the work lived and its influence was present
and ever growing more dominant. The dealers,
with whom we must always reckon if we care to
watch or admit the value of tendencies, were
concerned chiefly with the canvases of the men
of 1830 and their imitators and followers; there
was also with certain dealers a growing attention
directed to Impressionism as a light and a power.
Here, then, were two ends of a wide-apart world—
yet I should say that neither made the extreme
appeal nor was of such influence in our art mat-
ters as those earlier great ones of Italy who knew
the secret and beauty of mural decoration.
Decorative art became chief in a crowded stage.
Its first performances in the Chicago Exposition
of ’93 were of a sort to quicken intelligent desire
for greater beauty in all public buildings. Archi-
tects whose quickness of artistic vision is not to
be doubted, were swift in seeing and in develop-
ing decoration, and the latter years of the last
century were full ones.

The value of this movement is not to be found
alone in the number of public buildings, libraries,
court houses and other structures embellished
with dignified works, but more particularly in
this—that decorative art is based upon knowledge
of design, of drawing, of fitness of form to space,
of colour suited to environment, and finally, of
profound intention. Haphazard and accidental
are words not known in mural decoration, and if
we are to admit, as perhaps we must, that no
stupendous genius has arisen, that we have seen
no Michelangelo or Raphael creating imperish-
able beauty—we may not doubt that the sanity
of decoration is a balance wheel that we may de-
pend upon in the swing of that pendulum which
we shall see swinging far out of an orderly course,
and which will aid in bringing order and beauty
into our artistic lives.
During these years the tang of Impressionism
was in the air—all France, even all Europe, was
saturated with it. In its good form and its bad
it took possession of artist and student alike. It
was, speaking broadly, chiefly concerned with
light and its problems, and it swept across the
Atlantic to take our youth by storm. It was the
new thing come into the world to solve all prob-
lems, and certainly it solved many. The incom-
petent found a refuge for a time, and many painters
found real treasure in its founts. Many beautiful
things have been done, many delightful things,
but I doubt if we may, even with much searching,
find a genius or an entirely original work—one
borne of our own discovery. We have had cer-
tainly the professional model at the window and
at the mirror in every conceivable pose and
scheme—we have had daylight things done most
excellently in darkened studios with subtly ar-
ranged coloured electric lights, and painted with
clever brush work, and as little thought as may
be—but is that great mystery “Life” so revealed?