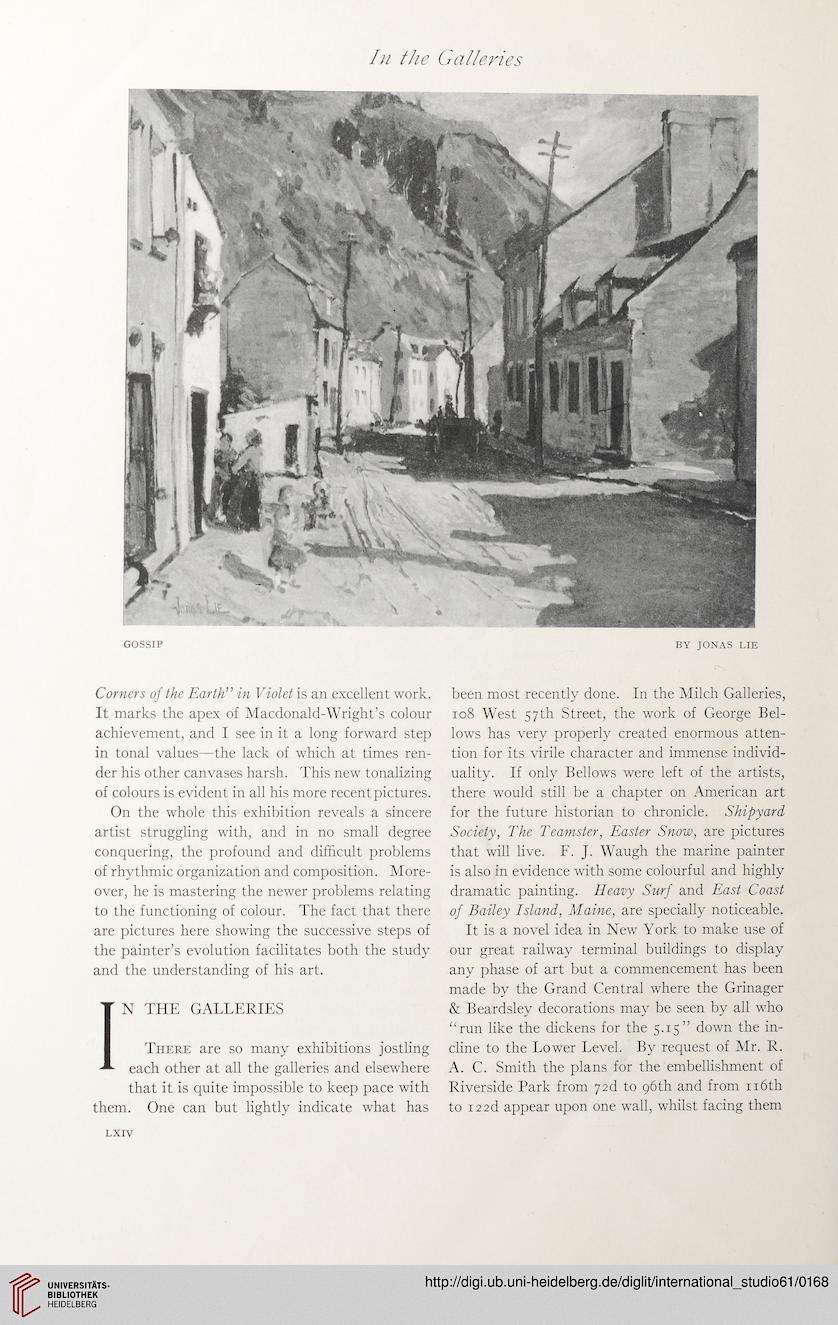 
Corners of the Earth” in Violet is an excellent work.
It marks the apex of Macdonald-Wright’s colour
achievement, and I see in it a long forward step
in tonal values—the lack of which at times ren-
der his other canvases harsh. This new tonalizing
of colours is evident in all his more recent pictures.
On the whole this exhibition reveals a sincere
artist struggling with, and in no small degree
conquering, the profound and difficult problems
of rhythmic organization and composition. More-
over, he is mastering the newer problems relating
to the functioning of colour. The fact that there
are pictures here showing the successive steps of
the painter’s evolution facilitates both the study
and the understanding of his art.
IN THE GALLERIES
There are so many exhibitions jostling
each other at all the galleries and elsewhere
that it is quite impossible to keep pace with
them. One can but lightly indicate what has

been most recently done. In the Milch Galleries,
108 West 57th Street, the work of George Bel-
lows has very properly created enormous atten-
tion for its virile character and immense individ-
uality. If only Bellows were left of the artists,
there would still be a chapter on American art
for the future historian to chronicle. Shipyard
Society, The Teamster, Easter Snow, are pictures
that will live. F. J. Waugh the marine painter
is also in evidence with some colourful and highly
dramatic painting. Heavy Surf and East Coast
of Bailey Island, Maine, are specially noticeable.
It is a novel idea in New York to make use of
our great railway terminal buildings to display
any phase of art but a commencement has been
made by the Grand Central where the Grinager
& Beardsley decorations may be seen by all who
“run like the dickens for the 5.15” down the in-
cline to the Lower Level. By request of Mr. R.
A. C. Smith the plans for the embellishment of
Riverside Park from 72d to 96th and from 116th
to i22d appear upon one wall, whilst facing them