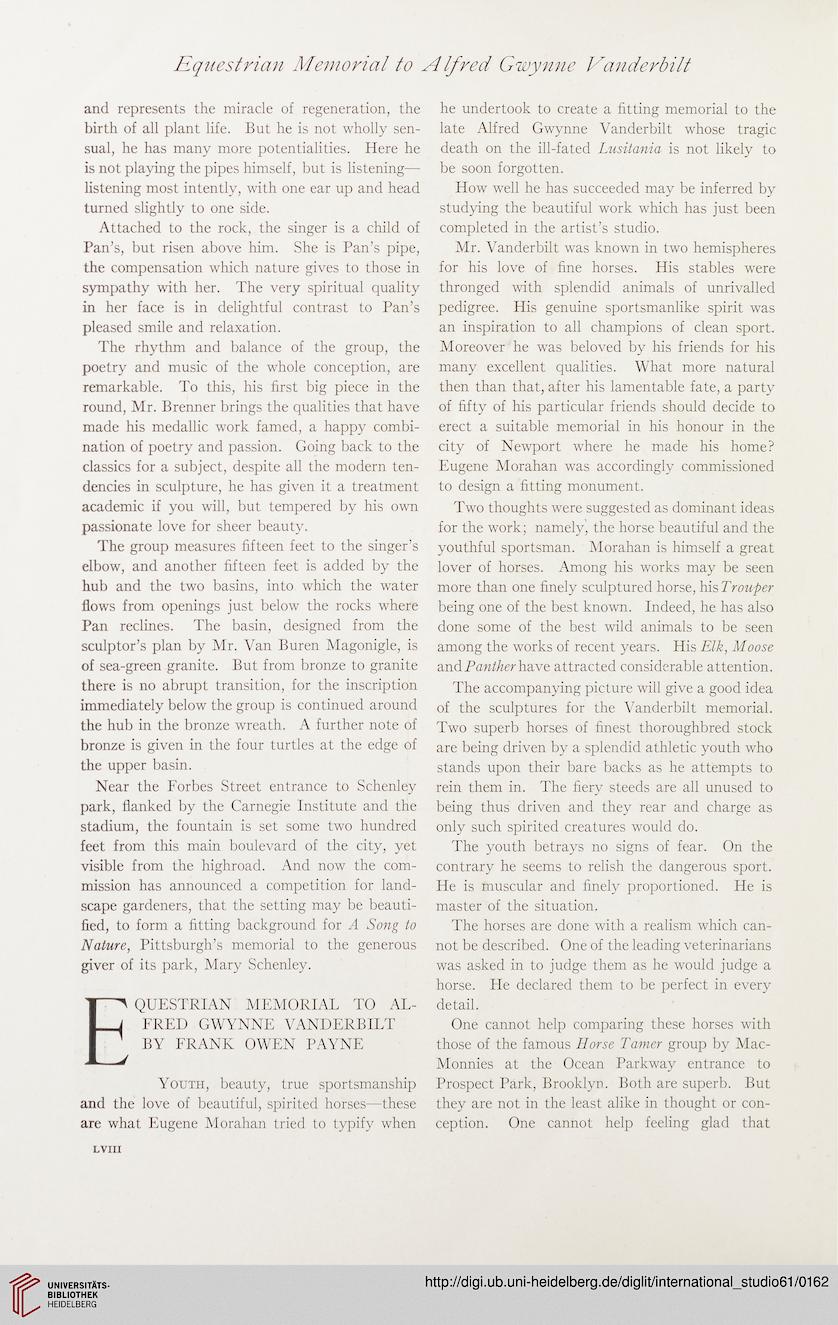 and represents the miracle of regeneration, the
birth of all plant life. But he is not wholly sen-
sual, he has many more potentialities. Here he
is not playing the pipes himself, but is listening—
listening most intently, with one ear up and head
turned slightly to one side.
Attached to the rock, the singer is a child of
Pan’s, but risen above him. She is Pan’s pipe,
the compensation which nature gives to those in
sympathy with her. The very spiritual quality
in her face is in delightful contrast to Pan’s
pleased smile and relaxation.
The rhythm and balance of the group, the
poetry and music of the whole conception, are
remarkable. To this, his first big piece in the
round, Mr. Brenner brings the qualities that have
made his medallic work famed, a happy combi-
nation of poetry and passion. Going back to the
classics for a subject, despite all the modern ten-
dencies in sculpture, he has given it a treatment
academic if you will, but tempered by his own
passionate love for sheer beauty.
The group measures fifteen feet to the singer’s
elbow, and another fifteen feet is added by the
hub and the two basins, into which the water
flows from openings just below the rocks where
Pan reclines. The basin, designed from the
sculptor’s plan by Mr. Van Buren Magonigle, is
of sea-green granite. But from bronze to granite
there is no abrupt transition, for the inscription
immediately below the group is continued around
the hub in the bronze wreath. A further note of
bronze is given in the four turtles at the edge of
the upper basin.
Near the Forbes Street entrance to Schenley
park, flanked by the Carnegie Institute and the
stadium, the fountain is set some two hundred
feet from this main boulevard of the city, yet
visible from the highroad. And now the com-
mission has announced a competition for land-
scape gardeners, that the setting may be beauti-
fied, to form a fitting background for A Song to
Nature, Pittsburgh’s memorial to the generous
giver of its park, Mary Schenley.
QUESTRIAN MEMORIAL TO AL-
FRED GWYNNE VANDERBILT
BY FRANK OWEN PAYNE
Youth, beauty, true sportsmanship
and the love of beautiful, spirited horses—these
are what Eugene Morahan tried to typify when

he undertook to create a fitting memorial to the
late Alfred Gwynne Vanderbilt whose tragic
death on the ill-fated Lusitania is not likely to
be soon forgotten.
How well he has succeeded may be inferred by
studying the beautiful work which has just been
completed in the artist’s studio.
Mr. Vanderbilt was known in two hemispheres
for his love of fine horses. His stables were
thronged with splendid animals of unrivalled
pedigree. His genuine sportsmanlike spirit was
an inspiration to all champions of clean sport.
Moreover he was beloved by his friends for his
many excellent qualities. What more natural
then than that, after his lamentable fate, a party
of fifty of his particular friends should decide to
erect a suitable memorial in his honour in the
city of Newport where he made his home?
Eugene Morahan was accordingly commissioned
to design a fitting monument.
Two thoughts were suggested as dominant ideas
for the work; namely', the horse beautiful and the
youthful sportsman. Morahan is himself a great
lover of horses. Among his works may be seen
more than one finely sculptured horse, hisTrouper
being one of the best known. Indeed, he has also
done some of the best wild animals to be seen
among the works of recent years. His Elk, Moose
and. Panther have attracted considerable attention.
The accompanying picture will give a good idea
of the sculptures for the Vanderbilt memorial.
Two superb horses of finest thoroughbred stock
are being driven by a splendid athletic youth who
stands upon their bare backs as he attempts to
rein them in. The fiery steeds are all unused to
being thus driven and they rear and charge as
only such spirited creatures would do.
The youth betrays no signs of fear. On the
contrary he seems to relish the dangerous sport.
He is muscular and finely proportioned. He is
master of the situation.
The horses are done with a realism which can-
not be described. One of the leading veterinarians
was asked in to judge them as he would judge a
horse. He declared them to be perfect in every
detail.
One cannot help comparing these horses with
those of the famous Horse Tamer group by Mac-
Monnies at the Ocean Parkway entrance to
Prospect Park, Brooklyn. Both are superb. But
they are not in the least alike in thought or con-
ception. One cannot help feeling glad that