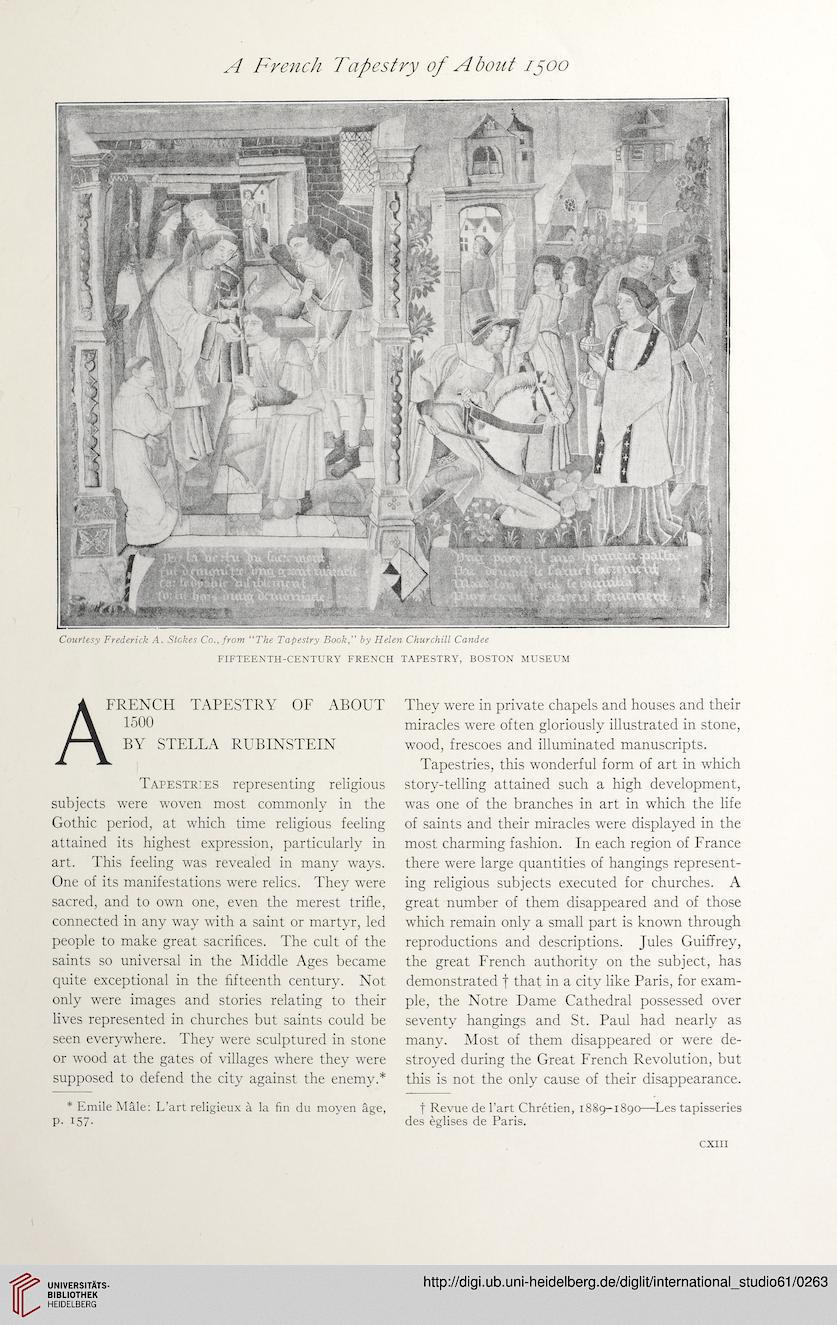 
Courtesy Frederick A. Stokes Co., from “The Tapestry Book,’’ by Helen Churchill Candee

A FRENCH TAPESTRY OF ABOUT
1500
BY STELLA RUBINSTEIN
Tapestrtes representing religious
subjects were woven most commonly in the
Gothic period, at which time religious feeling
attained its highest expression, particularly in
art. This feeling was revealed in many ways.
One of its manifestations were relics. They were
sacred, and to own one, even the merest trifle,
connected in any way with a saint or martyr, led
people to make great sacrifices. The cult of the
saints so universal in the Middle Ages became
quite exceptional in the fifteenth century. Not
only were images and stories relating to their
lives represented in churches but saints could be
seen everywhere. They were sculptured in stone
or wood at the gates of villages where they were
supposed to defend the city against the enemy.*
* Emile Male: L’art religieux a la fin du moyen <ige,
P- 157.

They were in private chapels and houses and their
miracles were often gloriously illustrated in stone,
wood, frescoes and illuminated manuscripts.
Tapestries, this wonderful form of art in which
story-telling attained such a high development,
was one of the branches in art in which the life
of saints and their miracles were displayed in the
most charming fashion. In each region of France
there were large quantities of hangings represent-
ing religious subjects executed for churches. A
great number of them disappeared and of those
which remain only a small part is known through
reproductions and descriptions. Jules Guiffrey,
the great French authority on the subject, has
demonstrated f that in a city like Paris, for exam-
ple, the Notre Dame Cathedral possessed over
seventy hangings and St. Paul had nearly as
many. Most of them disappeared or were de-
stroyed during the Great French Revolution, but
this is not the only cause of their disappearance.
f Revue de l’art Chretien, 1889-1890—Les tapisseries
des eglises de Paris.