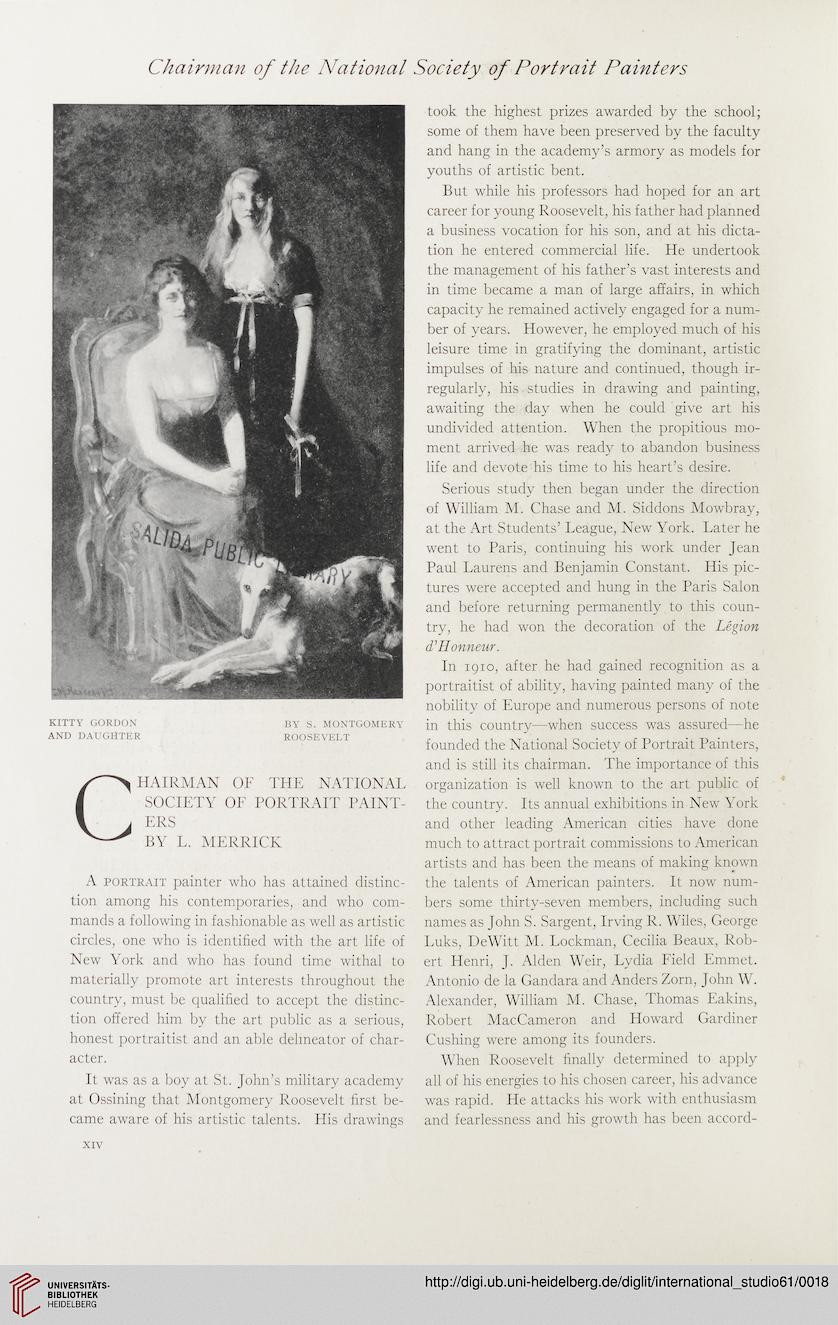 CHAIRMAN OF THE NATIONAL
SOCIETY OF PORTRAIT PAINT-
ERS
BY L. MERRICK
A portrait painter who has attained distinc-
tion among his contemporaries, and who com-
mands a following in fashionable as well as artistic
circles, one who is identified with the art life of
New York and who has found time withal to
materially promote art interests throughout the
country, must be qualified to accept the distinc-
tion offered him by the art public as a serious,
honest portraitist and an able delineator of char-
acter.
It was as a boy at St. John’s military academy
at Ossining that Montgomery Roosevelt first be-
came aware of his artistic talents. His drawings

took the highest prizes awarded by the school;
some of them have been preserved by the faculty
and hang in the academy’s armory as models for
youths of artistic bent.
But while his professors had hoped for an art
career for young Roosevelt, his father had planned
a business vocation for his son, and at his dicta-
tion he entered commercial life. He undertook
the management of his father’s vast interests and
in time became a man of large affairs, in which
capacity he remained actively engaged for a num-
ber of years. However, he employed much of his
leisure time in gratifying the dominant, artistic
impulses of his nature and continued, though ir-
regularly, his studies in drawing and painting,
awaiting the day when he could give art his
undivided attention. When the propitious mo-
ment arrived he was ready to abandon business
life and devote his time to his heart’s desire.
Serious study then began under the direction
of William M. Chase and M. Siddons Mowbray,
at the Art Students’ League, New York. Later he
went to Paris, continuing his work under Jean
Paul Laurens and Benjamin Constant. His pic-
tures were accepted and hung in the Paris Salon
and before returning permanently to this coun-
try, he had won the decoration of the Legion
d’Honneur.
In 1910, after he had gained recognition as a
portraitist of ability, having painted many of the
nobility of Europe and numerous persons of note
in this country—when success was assured—he
founded the National Society of Portrait Painters,
and is still its chairman. The importance of this
organization is well known to the art public of
the country. Its annual exhibitions in New York
and other leading American cities have done
much to attract portrait commissions to American
artists and has been the means of making known
the talents of American painters. It now num-
bers some thirty-seven members, including such
names as John S. Sargent, Irving R. Wiles, George
Luks, DeWitt M. Lockman, Cecilia Beaux, Rob-
ert Henri, J. Alden Weir, Lydia Field Emmet.
Antonio de la Gandara and Anders Zorn, John W.
Alexander, William M. Chase, Thomas Eakins,
Robert MacCameron and Howard Gardiner
Cushing were among its founders.
When Roosevelt finally determined to apply
all of his energies to his chosen career, his advance
was rapid. He attacks his work with enthusiasm
and fearlessness and his growth has been accord-