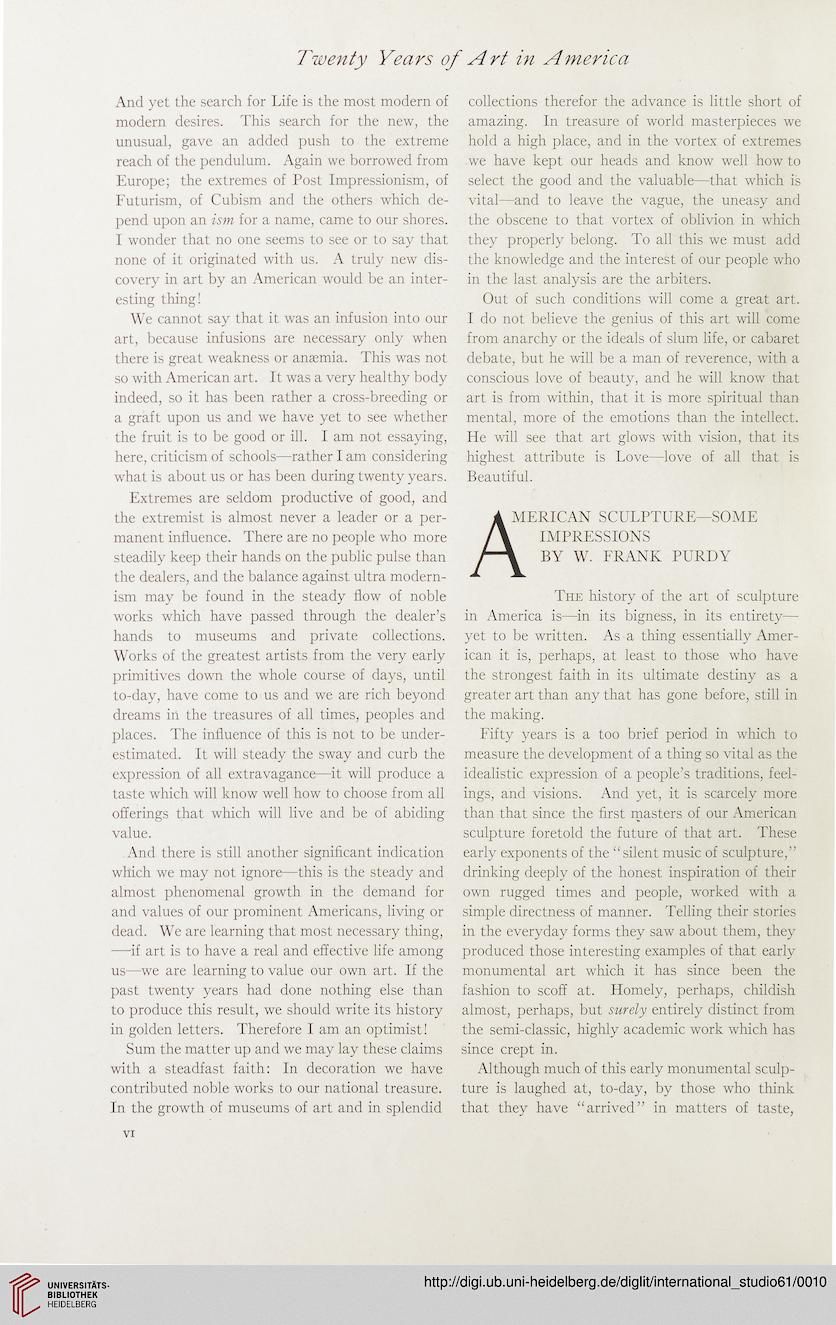 And yet the search for Life is the most modern of
modern desires. This search for the new, the
unusual, gave an added push to the extreme
reach of the pendulum. Again we borrowed from
Europe; the extremes of Post Impressionism, of
Futurism, of Cubism and the others which de-
pend upon an ism for a name, came to our shores.
I wonder that no one seems to see or to say that
none of it originated with us. A truly new dis-
covery in art by an American would be an inter-
esting thing!
We cannot say that it was an infusion into our
art, because infusions are necessary only when
there is great weakness or anaemia. This was not
so with American art. It was a very healthy body
indeed, so it has been rather a cross-breeding or
a graft upon us and we have yet to see whether
the fruit is to be good or ill. I am not essaying,
here, criticism of schools—rather I am considering
what is about us or has been during twenty years.
Extremes are seldom productive of good, and
the extremist is almost never a leader or a per-
manent influence. There are no people who more
steadily keep their hands on the public pulse than
the dealers, and the balance against ultra modern-
ism may be found in the steady flow of noble
works which have passed through the dealer’s
hands to museums and private collections.
Works of the greatest artists from the very early
primitives down the whole course of days, until
to-day, have come to us and we are rich beyond
dreams iii the treasures of all times, peoples and
places. The influence of this is not to be under-
estimated. It will steady the sway and curb the
expression of all extravagance—it will produce a
taste which will know well how to choose from all
offerings that which will live and be of abiding
value.
And there is still another significant indication
which we may not ignore—this is the steady and
almost phenomenal growth in the demand for
and values of our prominent Americans, living or
dead. We are learning that most necessary thing,
—if art is to have a real and effective life among
us—we are learning to value our own art. If the
past twenty years had done nothing else than
to produce this result, we should write its history
in golden letters. Therefore I am an optimist!
Sum the matter up and we may lay these claims
with a steadfast faith: In decoration we have
contributed noble works to our national treasure.
In the growth of museums of art and in splendid

collections therefor the advance is little short of
amazing. In treasure of world masterpieces we
hold a high place, and in the vortex of extremes
we have kept our heads and know well how to
select the good and the valuable—that which is
vital—and to leave the vague, the uneasy and
the obscene to that vortex of oblivion in which
they properly belong. To all this we must add
the knowledge and the interest of our people who
in the last analysis are the arbiters.
Out of such conditions will come a great art.
I do not believe the genius of this art will come
from anarchy or the ideals of slum life, or cabaret
debate, but he will be a man of reverence, with a
conscious love of beauty, and he will know that
art is from within, that it is more spiritual than
mental, more of the emotions than the intellect.
He will see that art glows with vision, that its
highest attribute is Love—love of all that is
Beautiful.
A MERICAN SCULPTURE—SOME
/\ IMPRESSIONS
f—\ BY W. FRANK PURDY
The history of the art of sculpture
in America is—in its bigness, in its entirety—
yet to be written. As a thing essentially Amer-
ican it is, perhaps, at least to those who have
the strongest faith in its ultimate destiny as a
greater art than any that has gone before, still in
the making.
Fifty years is a too brief period in which to
measure the development of a thing so vital as the
idealistic expression of a people’s traditions, feel-
ings, and visions. And yet, it is scarcely more
than that since the first masters of our American
sculpture foretold the future of that art. These
early exponents of the “silent music of sculpture,”
drinking deeply of the honest inspiration of their
own rugged times and people, worked with a
simple directness of manner. Telling their stories
in the everyday forms they saw about them, they
produced those interesting examples of that early
monumental art which it has since been the
fashion to scoff at. Homely, perhaps, childish
almost, perhaps, but surely entirely distinct from
the semi-classic, highly academic work which has
since crept in.
Although much of this early monumental sculp-
ture is laughed at, to-day, by those who think
that they have “arrived” in matters of taste,