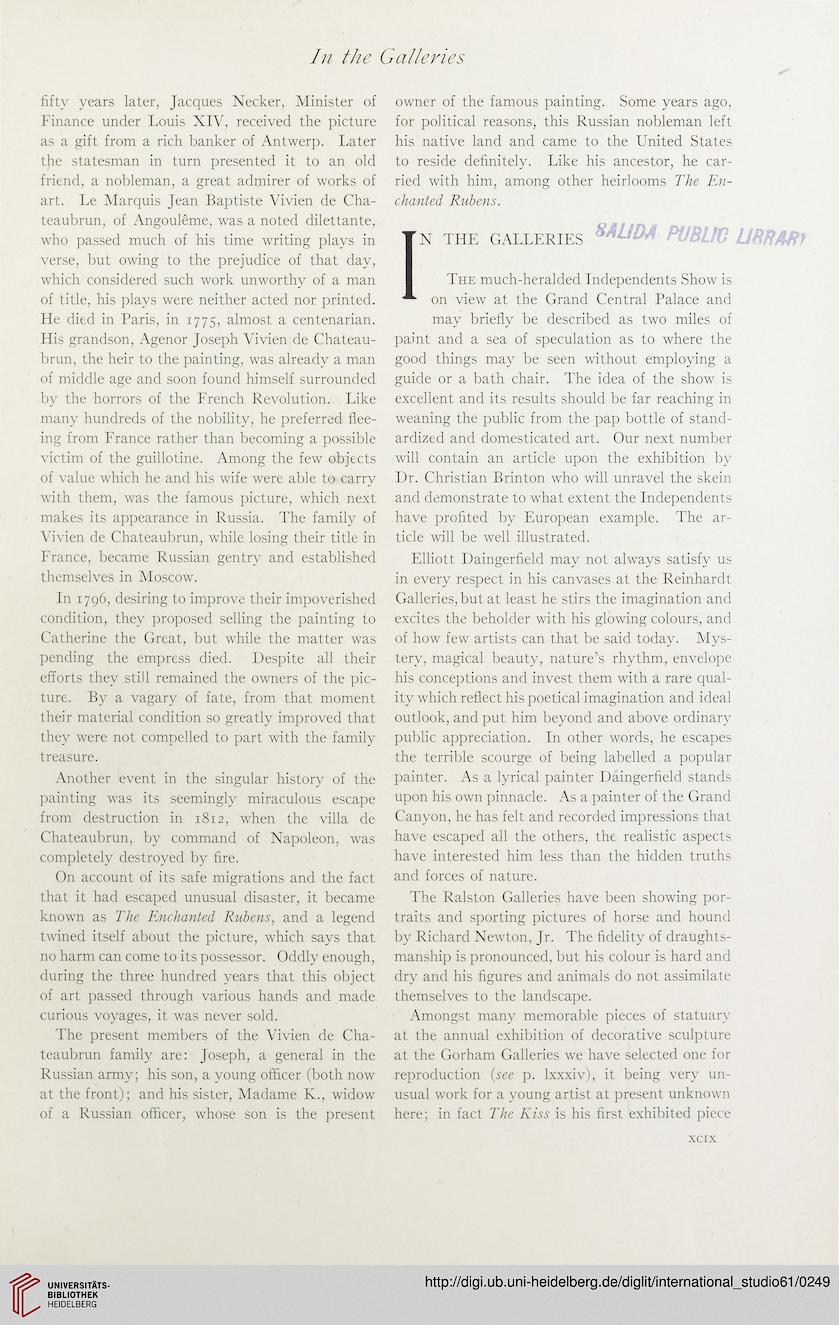 fifty years later, Jacques Necker, Minister of
Finance under Louis XIV, received the picture
as a gift from a rich banker of Antwerp. Later
the statesman in turn presented it to an old
friend, a nobleman, a great admirer of works of
art. Le Marquis Jean Baptiste Vivien de Cha-
teaubrun, of Angouleme, was a noted dilettante,
who passed much of his time writing plays in
verse, but owing to the prejudice of that day,
which considered such work unworthy of a man
of title, his plays were neither acted nor printed.
He died in Paris, in 1775, almost a centenarian.
His grandson, Agenor Joseph Vivien de Chateau-
brun, the heir to the painting, was already a man
of middle age and soon found himself surrounded
by the horrors of the French Revolution. Like
many hundreds of the nobility, he preferred flee-
ing from France rather than becoming a possible
victim of the guillotine. Among the few objects
of value which he and his wife were able to carry
with them, was the famous picture, which next
makes its appearance in Russia. The family of
Vivien de Chateaubrun, while losing their title in
France, became Russian gentry and established
themselves in Moscow.
In 1796, desiring to improve their impoverished
condition, they proposed selling the painting to
Catherine the Great, but while the matter was
pending the empress died. Despite all their
efforts they stiff remained the owners of the pic-
ture. By a vagary of fate, from that moment
their material condition so greatly improved that
they were not compelled to part with the family
treasure.
Another event in the singular history of the
painting was its seemingly miraculous escape
from destruction in 1812, when the villa de
Chateaubrun, by command of Napoleon, was
completely destroyed by fire.
On account of its safe migrations and the fact
that it had escaped unusual disaster, it became
known as The Enchanted Rubens, and a legend
twined itself about the picture, which says that
no harm can come to its possessor. Oddly enough,
during the three hundred years that this object
of art passed through various hands and made
curious voyages, it was never sold.
The present members of the Vivien de Cha-
teaubrun family are: Joseph, a general in the
Russian army; his son, a young officer (both now
at the front); and his sister, Madame K., widow
of a Russian officer, whose son is the present

owner of the famous painting. Some years ago,
for political reasons, this Russian nobleman left
his native land and came to the United States
to reside definitely. Like his ancestor, he car-
ried with him, among other heirlooms The En-
chanted Rubens.
IN THE GALLERIES SAUDA PUBLIC LIBRMr
The much-heralded Independents Show is
on view at the Grand Central Palace and
may briefly be described as two miles of
paint and a sea of speculation as to where the
good things may be seen without employing a
guide or a bath chair. The idea of the show is
excellent and its results should be far reaching in
weaning the public from the pap bottle of stand-
ardized and domesticated art. Our next number
will contain an article upon the exhibition by
Dr. Christian Brinton who will unravel the skein
and demonstrate to what extent the Independents
have profited by European example. The ar-
ticle will be well illustrated.
Elliott Daingerfield may not always satisfy us
in every respect in his canvases at the Reinhardt
Galleries, but at least he stirs the imagination and
excites the beholder with his glowing colours, and
of how few artists can that be said today. Mys-
tery, magical beauty, nature’s rhythm, envelope
his conceptions and invest them with a rare qual-
ity which reflect his poetical imagination and ideal
outlook, and put him beyond and above ordinary
public appreciation. In other words, he escapes
the terrible scourge of being labelled a popular
painter. As a lyrical painter Daingerfield stands
upon his own pinnacle. As a painter of the Grand
Canyon, he has felt and recorded impressions that
have escaped all the others, the realistic aspects
have interested him less than the hidden truths
and forces of nature.
The Ralston Galleries have been showing por-
traits and sporting pictures of horse and hound
by Richard Newton, Jr. The fidelity of draughts-
manship is pronounced, but his colour is hard and
dry and his figures and animals do not assimilate
themselves to the landscape.
Amongst many memorable pieces of statuary
at the annual exhibition of decorative sculpture
at the Gorham Galleries we have selected one for
reproduction (see p. Ixxxiv), it being very un-
usual work for a young artist at present unknown
here; in fact The Kiss is his first exhibited piece