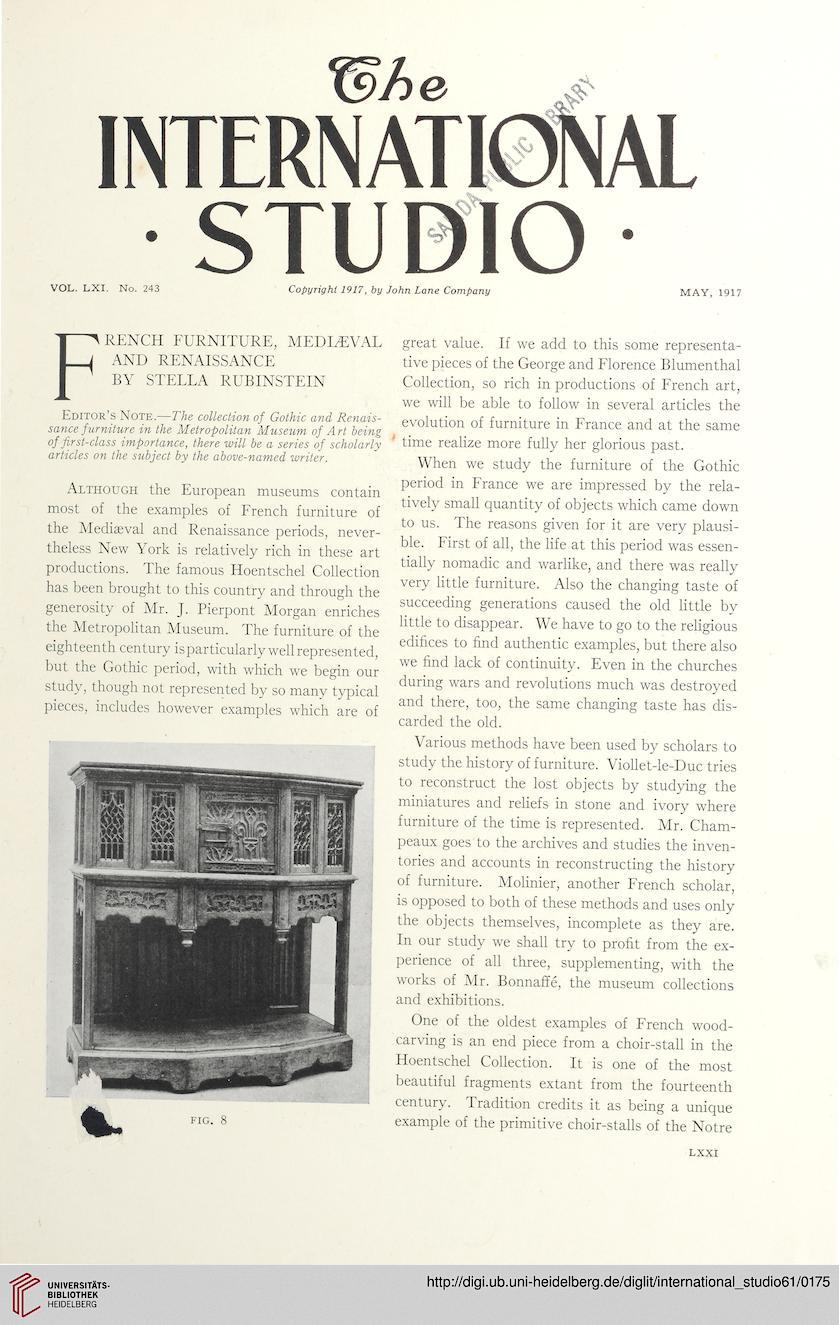 French furniture, mediaeval
AND RENAISSANCE
BY STELLA RUBINSTEIN
Editor’s Note.—The collection of Gothic and Renais-
sance furniture in the Metropolitan Museum of A rt being
of first-class importance, there will be a series of scholarly
articles on the subject by the above-named writer.

Although the European museums contain
most of the examples of French furniture of
the Mediaeval and Renaissance periods, never-
theless New York is relatively rich in these art
productions. The famous Hoentschel Collection
has been brought to this country and through the
generosity of Mr. J. Pierpont Morgan enriches
the Metropolitan Museum. The furniture of the
eighteenth century isparticularly well represented,
but the Gothic period, with which we begin our
study, though not represented by so many typical
pieces, includes however examples which are of


great value. If we add to this some representa-
tive pieces of the George and Florence Blumenthal
Collection, so rich in productions of French art,
we will be able to follow in several articles the
evolution of furniture in France and at the same
time realize more fully her glorious past.
When we study the furniture of the Gothic
period in France we are impressed by the rela-
tively small quantity of objects which came down
to us. The reasons given for it are very plausi-
ble. First of all, the life at this period was essen-
tially nomadic and warlike, and there was really
very little furniture. Also the changing taste of
succeeding generations caused the old little by
little to disappear. We have to go to the religious
edifices to find authentic examples, but there also
we find lack of continuity. Even in the churches
during wars and revolutions much was destroyed
and there, too, the same changing taste has dis-
carded the old.
Various methods have been used by scholars to
study the history of furniture. Viollet-le-Duc tries
to reconstruct the lost objects by studying the
miniatures and reliefs in stone and ivory where
furniture of the time is represented. Mr. Cham-
peaux goes to the archives and studies the inven-
tories and accounts in reconstructing the history
of furniture. Molinier, another French scholar,
is opposed to both of these methods and uses only
the objects themselves, incomplete as they are.
In our study we shall try to profit from the ex-
perience of all three, supplementing, with the
works of Mr. Bonnaffe, the museum collections
and exhibitions.
One of the oldest examples of French wood-
carving is an end piece from a choir-stall in the
Hoentschel Collection. It is one of the most
beautiful fragments extant from the fourteenth
century. Tradition credits it as being a unique
example of the primitive choir-stalls of the Notre