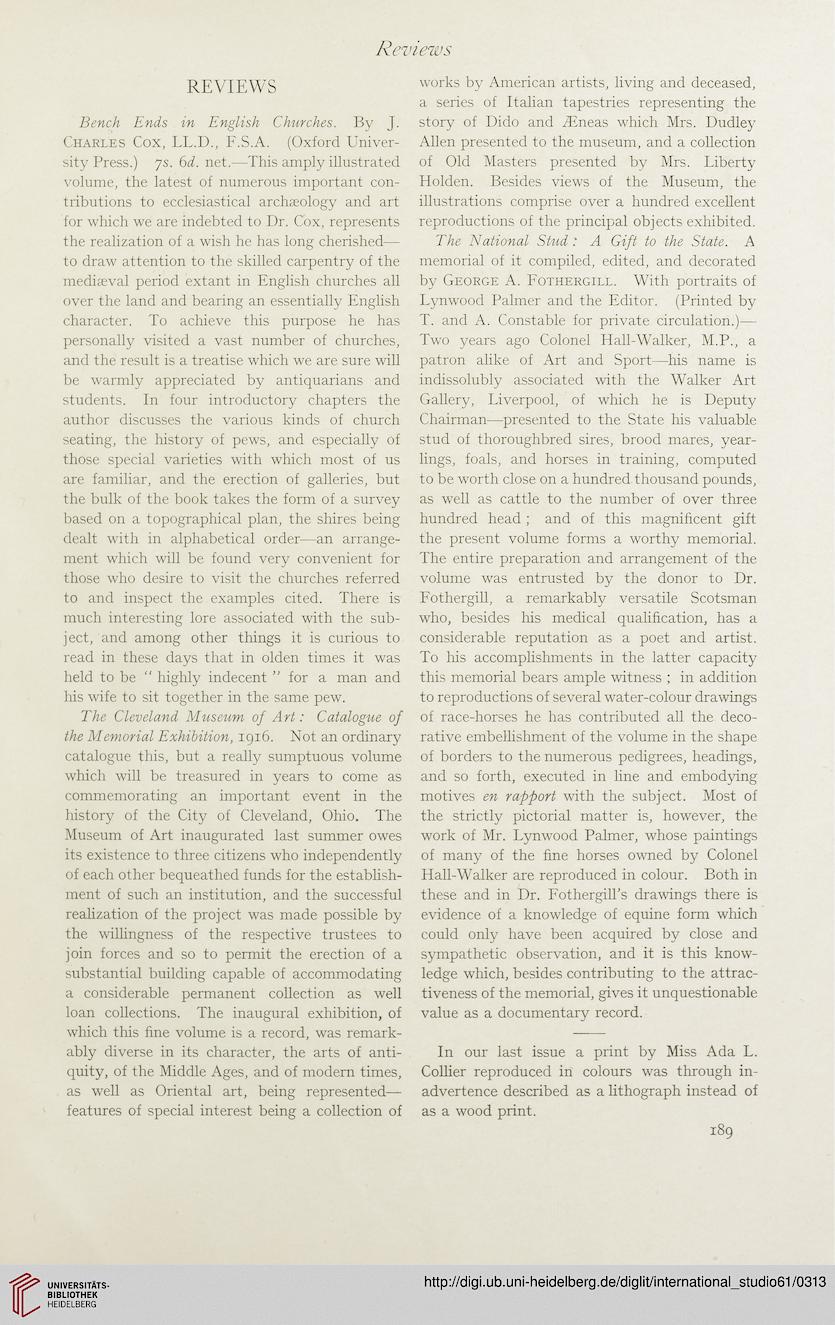 REVIEWS
Bench Ends in English Churches. By J.
Charles Cox, LL.D., F.S.A. (Oxford Univer-
sity Press.) 7s. 6d. net.—This amply illustrated
volume, the latest of numerous important con-
tributions to ecclesiastical archaeology and art
for which we are indebted to Dr. Cox, represents
the realization of a wish he has long cherished—
to draw attention to the skilled carpentry of the
mediaeval period extant in English churches all
over the land and bearing an essentially English
character. To achieve this purpose he has
personally visited a vast number of churches,
and the result is a treatise which we are sure will
be warmly appreciated by antiquarians and
students. In four introductory chapters the
author discusses the various kinds of church
seating, the history of pews, and especially of
those special varieties with which most of us
are familiar, and the erection of galleries, but
the bulk of the book takes the form of a survey
based on a topographical plan, the shires being
dealt with in alphabetical order—an arrange-
ment which will be found very convenient for
those who desire to visit the churches referred
to and inspect the examples cited. There is
much interesting lore associated with the sub-
ject, and among other things it is curious to
read in these days that in olden times it was
held to be “ highly indecent ” for a man and
his wife to sit together in the same pew.
The Cleveland Museum of Art: Catalogue of
the Memorial Exhibition, 1916. Not an ordinary
catalogue this, but a really sumptuous volume
which will be treasured in years to come as
commemorating an important event in the
history of the City of Cleveland, Ohio. The
Museum of Art inaugurated last summer owes
its existence to three citizens who independently
of each other bequeathed funds for the establish-
ment of such an institution, and the successful
realization of the project was made possible by
the willingness of the respective trustees to
join forces and so to permit the erection of a
substantial building capable of accommodating
a considerable permanent collection as well
loan collections. The inaugural exhibition, of
which this fine volume is a record, was remark-
ably diverse in its character, the arts of anti-
quity, of the Middle Ages, and of modern times,
as well as Oriental art, being represented—
features of special interest being a collection of

works by American artists, living and deceased,
a series of Italian tapestries representing the
story of Dido and JEneas which Mrs. Dudley
Allen presented to the museum, and a collection
of Old Masters presented by Mrs. Liberty
Holden. Besides views of the Museum, the
illustrations comprise over a hundred excellent
reproductions of the principal objects exhibited.
The National Stud : A Gift to the State. A
memorial of it compiled, edited, and decorated
by George A. Fothergill. With portraits of
Lynwood Palmer and the Editor. (Printed by
T. and A. Constable for private circulation.)—
Two years ago Colonel Hall-Walker, M.P., a
patron alike of Art and Sport—his name is
indissolubly associated with the Walker Art
Gallery, Liverpool, of which he is Deputy
Chairman—presented to the State his valuable
stud of thoroughbred sires, brood mares, year-
lings, foals, and horses in training, computed
to be worth close on a hundred thousand pounds,
as well as cattle to the number of over three
hundred head; and of this magnificent gift
the present volume forms a worthy memorial.
The entire preparation and arrangement of the
volume was entrusted by the donor to Dr.
Fothergill, a remarkably versatile Scotsman
who, besides his medical qualification, has a
considerable reputation as a poet and artist.
To his accomplishments in the latter capacity
this memorial bears ample witness ; in addition
to reproductions of several water-colour drawings
of race-horses he has contributed all the deco-
rative embellishment of the volume in the shape
of borders to the numerous pedigrees, headings,
and so forth, executed in line and embodying
motives en rapport with the subject. Most of
the strictly pictorial matter is, however, the
work of Mr. Lynwood Palmer, whose paintings
of many of the fine horses owned by Colonel
Hall-Walker are reproduced in colour. Both in
these and in Dr. Fothergill’s drawings there is
evidence of a knowledge of equine form which
could only have been acquired by close and
sympathetic observation, and it is this know-
ledge which, besides contributing to the attrac-
tiveness of the memorial, gives it unquestionable
value as a documentary record.
In our last issue a print by Miss Ada L.
Collier reproduced in colours was through in-
advertence described as a lithograph instead of
as a wood print.
189