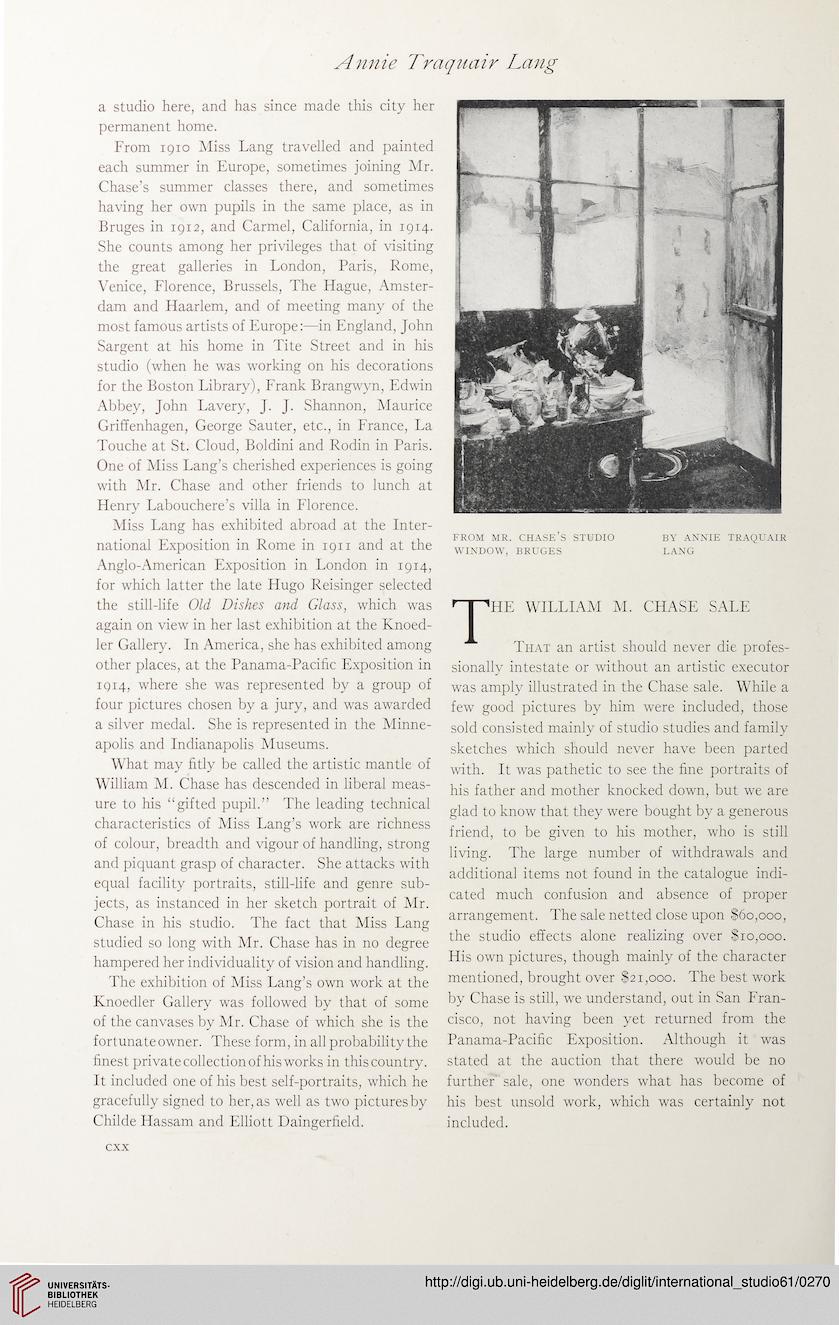 a studio here, and has since made this city her
permanent home.
From 1910 Miss Lang travelled and painted
each summer in Europe, sometimes joining Mr.
Chase’s summer classes there, and sometimes
having her own pupils in the same place, as in
Bruges in 1912, and Carmel, California, in 1914.
She counts among her privileges that of visiting
the great galleries in London, Paris, Rome,
Venice, Florence, Brussels, The Hague, Amster-
dam and Haarlem, and of meeting many of the
most famous artists of Europe:—in England, John
Sargent at his home in Lite Street and in his
studio (when he was working on his decorations
for the Boston Library), Frank Brangwyn, Edwin
Abbey, John Lavery, J. J. Shannon, Maurice
Griffenhagen, George Sauter, etc., in France, La
Touche at St. Cloud, Boldini and Rodin in Paris.
One of Miss Lang’s cherished experiences is going
with Mr. Chase and other friends to lunch at
Henry Labouchere’s villa in Florence.
Miss Lang has exhibited abroad at the Inter-
national Exposition in Rome in 1911 and at the
Anglo-American Exposition in London in 1914,
for which latter the late Hugo Reisinger selected
the still-life Old Dishes and Glass, which was
again on view in her last exhibition at the Knoed-
ler Gallery. In America, she has exhibited among
other places, at the Panama-Pacific Exposition in
1914, where she was represented by a group of
four pictures chosen by a jury, and was awarded
a silver medal. She is represented in the Minne-
apolis and Indianapolis Museums.
What may fitly be called the artistic mantle of
William M. Chase has descended in liberal meas-
ure to his “gifted pupil.” The leading technical
characteristics of Miss Lang’s work are richness
of colour, breadth and vigour of handling, strong
and piquant grasp of character. She attacks with
equal facility portraits, still-life and genre sub-
jects, as instanced in her sketch portrait of Mr.
Chase in his studio. The fact that Miss Lang
studied so long with Mr. Chase has in no degree
hampered her individuality of vision and handling.
The exhibition of Miss Lang’s own work at the
Knoedler Gallery was followed by that of some
of the canvases by Mr. Chase of which she is the
fortunate owner. These form, in all probability the
finest private collection of his works in this country.
It included one of his best self-portraits, which he
gracefully signed to her, as well as two pictures by
Childe Hassam and Elliott Daingerfield.

r-p’HE WILLIAM M. CHASE SALE
That an artist should never die profes-
sionally intestate or without an artistic executor
was amply illustrated in the Chase sale. While a
few good pictures by him were included, those
sold consisted mainly of studio studies and family
sketches which should never have been parted
with. It was pathetic to see the fine portraits of
his father and mother knocked down, but we are
glad to know that they were bought by a generous
friend, to be given to his mother, who is still
living. The large number of withdrawals and
additional items not found in the catalogue indi-
cated much confusion and absence of proper
arrangement. The sale netted close upon $60,000,
the studio effects alone realizing over $10,000.
His own pictures, though mainly of the character
mentioned, brought over $21,000. The best work
by Chase is still, we understand, out in San Fran-
cisco, not having been yet returned from the
Panama-Pacific Exposition. Although it was
stated at the auction that there would be no
further sale, one wonders what has become of
his best unsold work, which was certainly not
included.