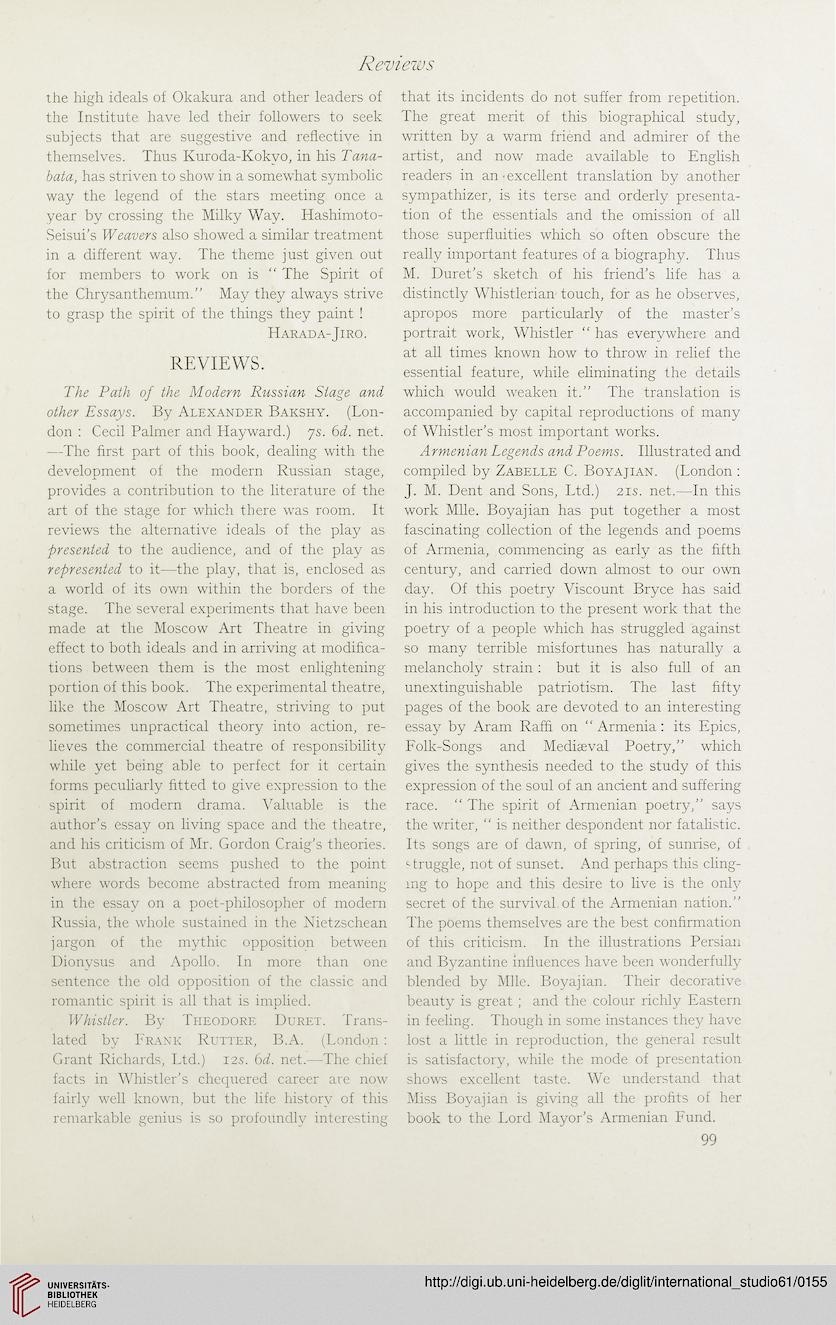 the high ideals of Okakura and other leaders of
the Institute have led their followers to seek
subjects that are suggestive and reflective in
themselves. Thus Kuroda-Kokvo, in his Tana-
bata, has striven to show in a somewhat symbolic
way the legend of the stars meeting once a
year by crossing the Milky Way. Hashimoto-
Seisui’s Weavers also showed a similar treatment
in a different way. The theme just given out
for members to work on is “ The Spirit of
the Chrysanthemum." May they always strive
to grasp the spirit of the things they paint !
Harada-Jiro.
REVIEWS.
The Path of the Modern Russian Stage and
other Essays. By Alexander Bakshy. (Lon-
don : Cecil Palmer and Hayward.) 7s. 6d. net.
—The first part of this book, dealing with the
development of the modern Russian stage,
provides a contribution to the literature of the
art of the stage for which there was room. It
reviews the alternative ideals of the play as
presented to the audience, and of the play as
represented to it—the play, that is, enclosed as
a world of its own within the borders of the
stage. The several experiments that have been
made at the Moscow Art Theatre in giving
effect to both ideals and in arriving at modifica-
tions between them is the most enlightening
portion of this book. The experimental theatre,
like the Moscow Art Theatre, striving to put
sometimes unpractical theory into action, re-
lieves the commercial theatre of responsibility
while yet being able to perfect for it certain
forms peculiarly fitted to give expression to the
spirit of modern drama. Valuable is the
author’s essay on living space and the theatre,
and his criticism of Mr. Gordon Craig’s theories.
But abstraction seems pushed to the point
where words become abstracted from meaning-
in the essay on a poet-philosopher of modern
Russia, the whole sustained in the Nietzschean
jargon of the mythic opposition between
Dionysus and Apollo. In more than one
sentence the old opposition of the classic and
romantic spirit is all that is implied.
Whistler. By Theodore Duret. Trans-
lated by Frank Rutter, B.A. (London :
Grant Richards, Ltd.) 12s. 6d. net.—The chief
facts in Whistler’s chequered career are now
fairly well known, but the life history of this
remarkable genius is so profoundly interesting

that its incidents do not suffer from repetition.
The great merit of this biographical study,
written by a warm friend and admirer of the
artist, and now made available to English
readers in an-excellent translation by another
sympathizer, is its terse and orderly presenta-
tion of the essentials and the omission of all
those superfluities which so often obscure the
really important features of a biography. Thus
M. Duret’s sketch of his friend’s life has a
distinctly Whistlerian touch, for as he observes,
apropos more particularly of the master’s
portrait work, Whistler “ has everywhere and
at all times known how to throw in relief the
essential feature, while eliminating the details
which would weaken it.” The translation is
accompanied by capital reproductions of many
of Whistler’s most important works.
Armenian Legends and Poems. Illustrated and
compiled by Zabelle C. Boyajian. (London :
J. M. Dent and Sons, Ltd.) 21s. net.—In this
work Mlle. Boyajian has put together a most
fascinating collection of the legends and poems
of Armenia, commencing as early as the fifth
century, and carried down almost to our own
day. Of this poetry Viscount Bryce has said
in his introduction to the present work that the
poetry of a people which has struggled against
so many terrible misfortunes has naturally a
melancholy strain : but it is also full of an
unextinguishable patriotism. The last fifty
pages of the book are devoted to an interesting
essay by Aram Raffi on “ Armenia: its Epics,
Folk-Songs and Mediaeval Poetry,” which
gives the synthesis needed to the study of this
expression of the soul of an ancient and suffering
race. “ The spirit of Armenian poetry,” says
the writer, “ is neither despondent nor fatalistic.
Its songs are of dawn, of spring, of sunrise, of
struggle, not of sunset. And perhaps this cling-
ing to hope and this desire to live is the only
secret of the survival of the Armenian nation.”
The poems themselves are the best confirmation
of this criticism. In the illustrations Persian
and Byzantine influences have been wonderfully
blended by Mlle. Boyajian. Their decorative
beauty is great ; and the colour richly Eastern
in feeling. Though in some instances they have
lost a little in reproduction, the general result
is satisfactory, while the mode of presentation
shows excellent taste. We understand that
Miss Boyajian is giving all the profits of her
book to the Lord Mayor’s Armenian Fund.
99