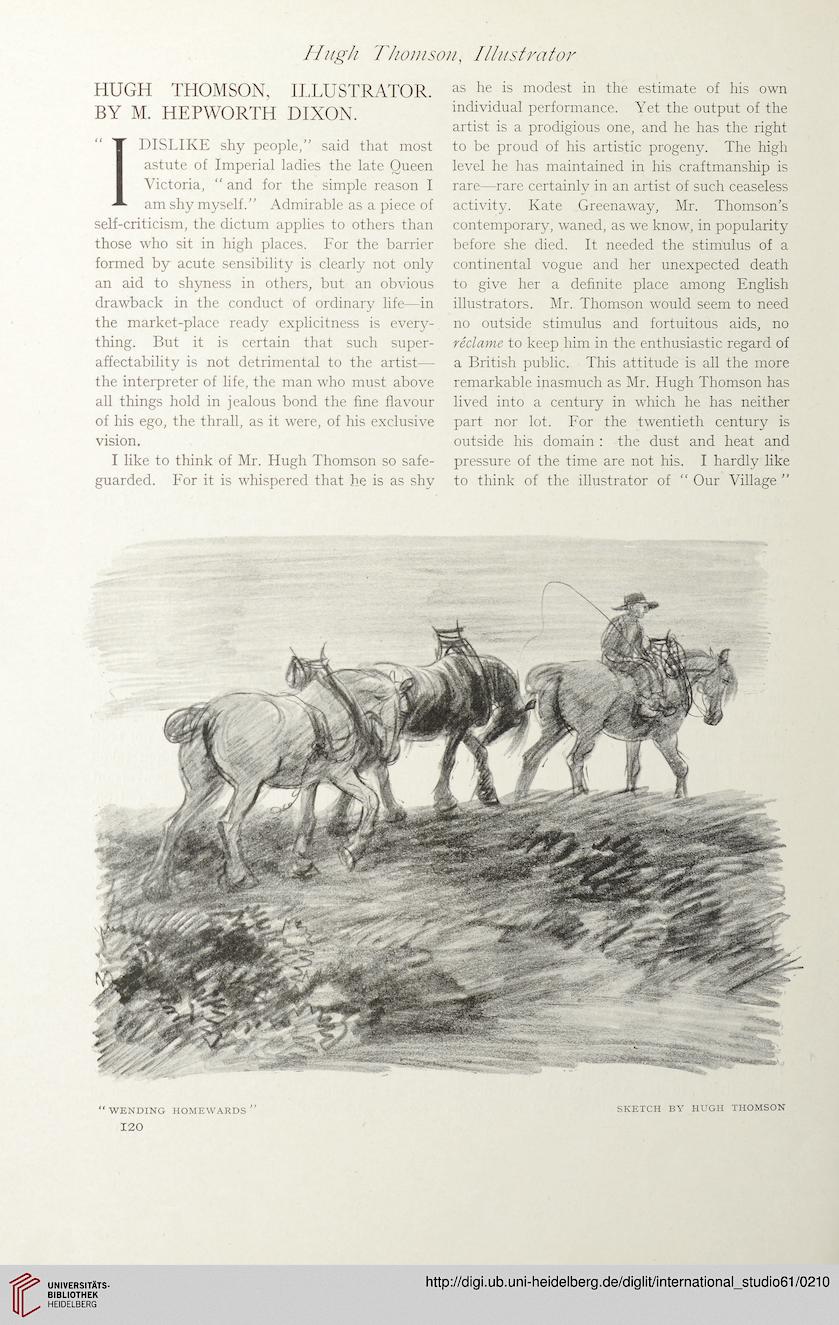 HUGH THOMSON, ILLUSTRATOR.
BY M. HEPWORTH DIXON.
I DISLIKE shy people/' said that most
astute of Imperial ladies the late Queen
Victoria, " and for the simple reason I
am shy myself.” Admirable as a piece of
self-criticism, the dictum applies to others than
those who sit in high places. For the barrier
formed by acute sensibility is clearly not only
an aid to shyness in others, but an obvious
drawback in the conduct of ordinary life—in
the market-place ready explicitness is every-
thing. But it is certain that such super-
affectability is not detrimental to the artist—
the interpreter of life, the man who must above
all things hold in jealous bond the fine flavour
of his ego, the thrall, as it were, of his exclusive
vision.
I like to think of Mr. Hugh Thomson so safe-
guarded. For it is whispered that he is as shy

as he is modest in the estimate of his own
individual performance. Yet the output of the
artist is a prodigious one, and he has the right
to be proud of his artistic progeny. The high
level he has maintained in his craftmanship is
rare—rare certainly in an artist of such ceaseless
activity. Kate Greenaway, Mr. Thomson’s
contemporary, waned, as we know, in popularity
before she died. It needed the stimulus of a
continental vogue and her unexpected death
to give her a definite place among English
illustrators. Mr. Thomson would seem to need
no outside stimulus and fortuitous aids, no
reclame to keep him in the enthusiastic regard of
a British public. This attitude is all the more
remarkable inasmuch as Mr. Hugh Thomson has
lived into a century in which he has neither
part nor lot. For the twentieth century is
outside his domain : the dust and heat and
pressure of the time are not his. I hardly like
to think of the illustrator of “ Our Village ”