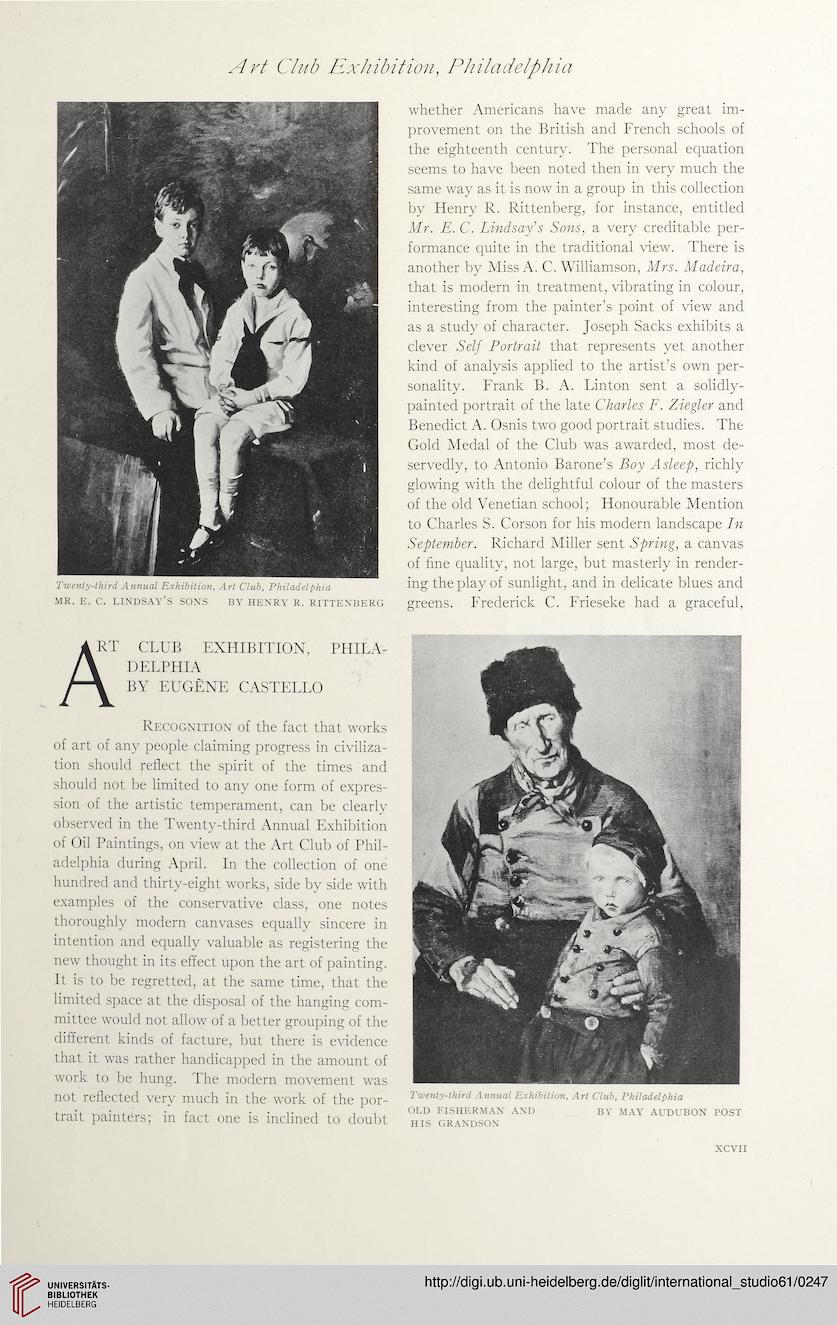 
whether Americans have made any great im-
provement on the British and French schools of
the eighteenth century. The personal equation
seems to have been noted then in very much the
same way as it is now in a group in this collection
by Henry R. Rittenberg, for instance, entitled
Mr. E. C. Lindsay’s Sons, a very creditable per-
formance quite in the traditional view. There is
another by Miss A. C. Williamson, Mrs. Madeira,
that is modern in treatment, vibrating in colour,
interesting from the painter’s point of view and
as a study of character. Joseph Sacks exhibits a
clever Self Portrait that represents yet another
kind of analysis applied to the artist’s own per-
sonality. Frank B. A. Linton sent a solidly-
painted portrait of the late Charles F. Ziegler and
Benedict A. Osnis two good portrait studies. The
Gold Medal of the Club was awarded, most de-
servedly, to Antonio Barone’s Boy Asleep, richly
glowing with the delightful colour of the masters
of the old Venetian school; Honourable Mention
to Charles S. Corson for his modern landscape In
September. Richard Miller sent Spring, a canvas
of fine quality, not large, but masterly in render-
ing the play of sunlight, and in delicate blues and
greens. Frederick C. Frieseke had a graceful,

ART CLUB EXHIBITION, PHILA-
/\ DELPHIA
AA BY EUGENE CASTELLO
Recognition of the fact that works
of art of any people claiming progress in civiliza-
tion should reflect the spirit of the times and
should not be limited to any one form of expres-
sion of the artistic temperament, can be clearly
observed in the Twenty-third Annual Exhibition
of Oil Paintings, on view at the Art Club of Phil-
adelphia during April. In the collection of one
hundred and thirty-eight works, side by side with
examples of the conservative class, one notes
thoroughly modern canvases equally sincere in
intention and equally valuable as registering the
new thought in its effect upon the art of painting.
It is to be regretted, at the same time, that the
limited space at the disposal of the hanging com-
mittee would not allow of a better grouping of the
different kinds of facture, but there is evidence
that it was rather handicapped in the amount of
work to be hung. The modern movement was
not reflected very much in the work of the por-
trait painters; in fact one is inclined to doubt


OLD FISHERMAN AND
HIS GRANDSON