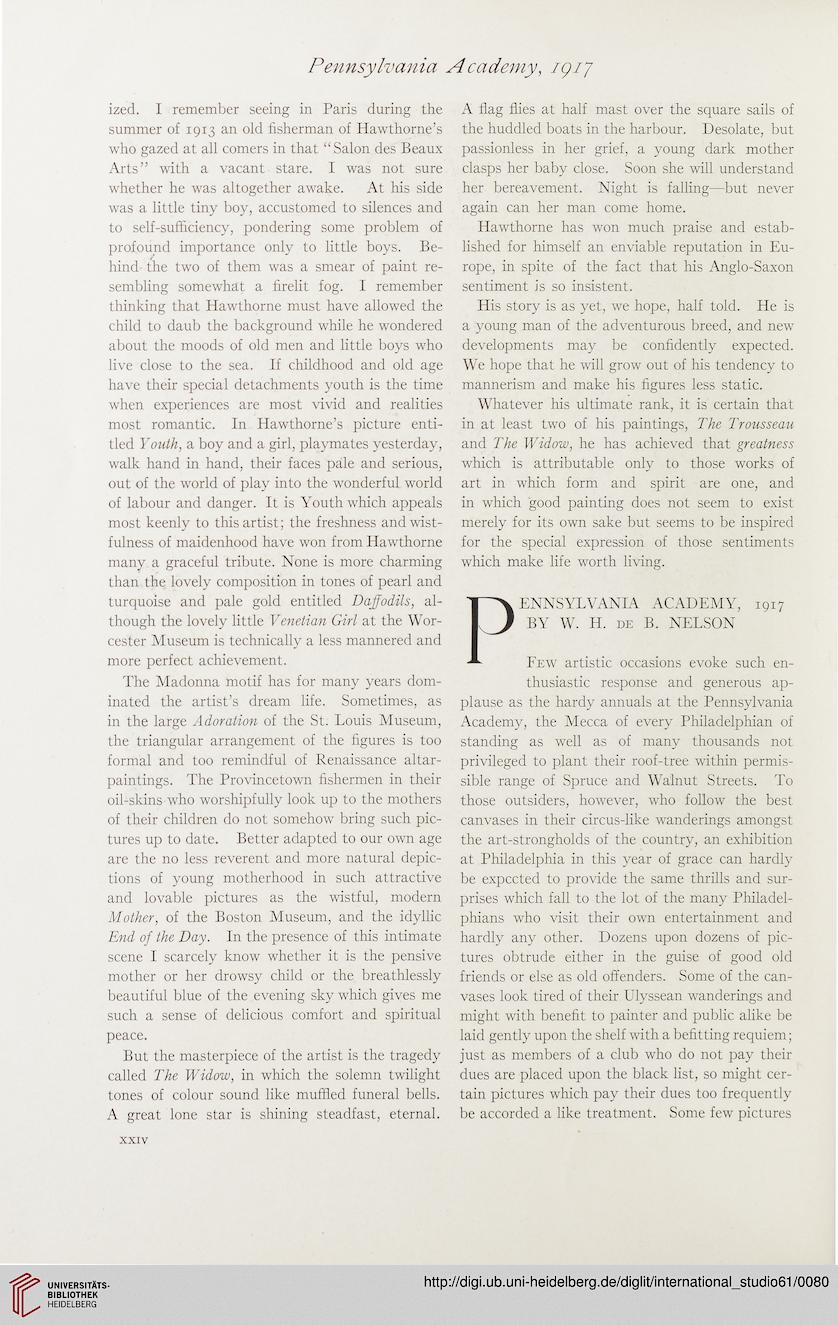 ized. I remember seeing in Paris during the
summer of 1913 an old fisherman of Hawthorne’s
who gazed at all comers in that “Salon des Beaux
Arts” with a vacant stare. I was not sure
whether he was altogether awake. At his side
was a little tiny boy, accustomed to silences and
to self-sufficiency, pondering some problem of
profound importance only to little boys. Be-
hind the two of them was a smear of paint re-
sembling somewhat a firelit fog. I remember
thinking that Hawthorne must have allowed the
child to daub the background while he wondered
about the moods of old men and little boys who
live close to the sea. If childhood and old age
have their special detachments youth is the time
when experiences are most vivid and realities
most romantic. In Hawthorne’s picture enti-
tled Youth, a boy and a girl, playmates yesterday,
walk hand in hand, their faces pale and serious,
out of the world of play into the wonderful world
of labour and danger. It is Youth which appeals
most keenly to this artist; the freshness and wist-
fulness of maidenhood have won from Hawthorne
many a graceful tribute. None is more charming
than the lovely composition in tones of pearl and
turquoise and pale gold entitled Daffodils, al-
though the lovely little Venetian Girl at the Wor-
cester Museum is technically a less mannered and
more perfect achievement.
The Madonna motif has for many years dom-
inated the artist’s dream life. Sometimes, as
in the large Adoration of the St. Louis Museum,
the triangular arrangement of the figures is too
formal and too remindful of Renaissance altar-
paintings. The Provincetown fishermen in their
oil-skins who worshipfully look up to the mothers
of their children do not somehow bring such pic-
tures up to date. Better adapted to our own age
are the no less reverent and more natural depic-
tions of young motherhood in such attractive
and lovable pictures as the wistful, modern
Mother, of the Boston Museum, and the idyllic
End of the Day. In the presence of this intimate
scene I scarcely know whether it is the pensive
mother or her drowsy child or the breathlessly
beautiful blue of the evening sky which gives me
such a sense of delicious comfort and spiritual
peace.
But the masterpiece of the artist is the tragedy
called The Widow, in which the solemn twilight
tones of colour sound like muffled funeral bells.
A great lone star is shining steadfast, eternal.

A flag flies at half mast over the square sails of
the huddled boats in the harbour. Desolate, but
passionless in her grief, a young dark mother
clasps her baby close. Soon she will understand
her bereavement. Night is falling—but never
again can her man come home.
Hawthorne has won much praise and estab-
lished for himself an enviable reputation in Eu-
rope, in spite of the fact that his Anglo-Saxon
sentiment is so insistent.
His story is as yet, we hope, half told. He is
a young man of the adventurous breed, and new
developments may be confidently expected.
We hope that he will grow out of his tendency to
mannerism and make his figures less static.
Whatever his ultimate rank, it is certain that
in at least two of his paintings, The Trousseau
and The Widow, he has achieved that greatness
which is attributable only to those works of
art in which form and spirit are one, and
in which good painting does not seem to exist
merely for its own sake but seems to be inspired
for the special expression of those sentiments
which make life worth living.
ENNSYLVANIA ACADEMY, 1917
BY W. H. de B. NELSON
Few artistic occasions evoke such en-
thusiastic response and generous ap-
plause as the hardy annuals at the Pennsylvania
Academy, the Mecca of every Philadelphian of
standing as well as of many thousands not
privileged to plant their roof-tree within permis-
sible range of Spruce and Walnut Streets. To
those outsiders, however, who follow the best
canvases in their circus-like wanderings amongst
the art-strongholds of the country, an exhibition
at Philadelphia in this year of grace can hardly
be expected to provide the same thrills and sur-
prises which fall to the lot of the many Philadel-
phians who visit their own entertainment and
hardly any other. Dozens upon dozens of pic-
tures obtrude either in the guise of good old
friends or else as old offenders. Some of the can-
vases look tired of their Ulyssean wanderings and
might with benefit to painter and public alike be
laid gently upon the shelf with a befitting requiem;
just as members of a club who do not pay their
dues are placed upon the black list, so might cer-
tain pictures which pay their dues too frequently
be accorded a like treatment. Some few pictures