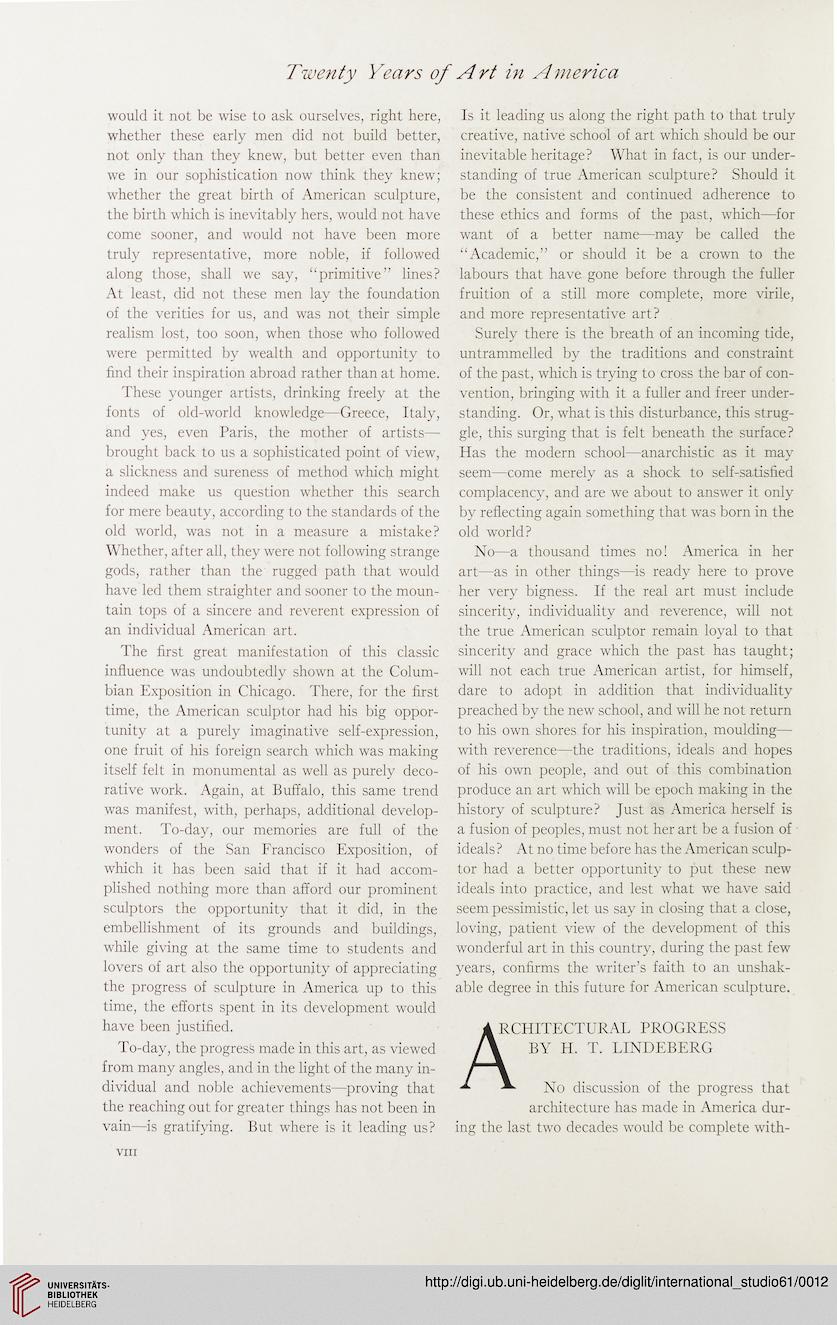 would it not be wise to ask ourselves, right here,
whether these early men did not build better,
not only than they knew, but better even than
we in our sophistication now think they knew;
whether the great birth of American sculpture,
the birth which is inevitably hers, would not have
come sooner, and would not have been more
truly representative, more noble, if followed
along those, shall we say, “primitive” lines?
At least, did not these men lay the foundation
of the verities for us, and was not their simple
realism lost, too soon, when those who followed
were permitted by wealth and opportunity to
find their inspiration abroad rather than at home.
These younger artists, drinking freely at the
fonts of old-world knowledge—Greece, Italy,
and yes, even Paris, the mother of artists—
brought back to us a sophisticated point of view,
a slickness and sureness of method which might
indeed make us question whether this search
for mere beauty, according to the standards of the
old world, was not in a measure a mistake?
Whether, after all, they were not following strange
gods, rather than the rugged path that would
have led them straighter and sooner to the moun-
tain tops of a sincere and reverent expression of
an individual American art.
The first great manifestation of this classic
influence was undoubtedly shown at the Colum-
bian Exposition in Chicago. There, for the first
time, the American sculptor had his big oppor-
tunity at a purely imaginative self-expression,
one fruit of his foreign search which was making
itself felt in monumental as well as purely deco-
rative work. Again, at Buffalo, this same trend
was manifest, with, perhaps, additional develop-
ment. To-day, our memories are full of the
wonders of the San Francisco Exposition, of
which it has been said that if it had accom-
plished nothing more than afford our prominent
sculptors the opportunity that it did, in the
embellishment of its grounds and buildings,
while giving at the same time to students and
lovers of art also the opportunity of appreciating
the progress of sculpture in America up to this
time, the efforts spent in its development would
have been justified.
To-day, the progress made in this art, as viewed
from many angles, and in the light of the many in-
dividual and noble achievements—proving that
the reaching out for greater things has not been in
vain—is gratifying. But where is it leading us?

Is it leading us along the right path to that truly
creative, native school of art which should be our
inevitable heritage? What in fact, is our under-
standing of true American sculpture? Should it
be the consistent and continued adherence to
these ethics and forms of the past, which—for
want of a better name—may be called the
“Academic,” or should it be a crown to the
labours that have gone before through the fuller
fruition of a still more complete, more virile,
and more representative art?
Surely there is the breath of an incoming tide,
untrammelled by the traditions and constraint
of the past, which is trying to cross the bar of con-
vention, bringing with it a fuller and freer under-
standing. Or, what is this disturbance, this strug-
gle, this surging that is felt beneath the surface?
Has the modern school—anarchistic as it may
seem—come merely as a shock to self-satisfied
complacency, and are we about to answer it only
by reflecting again something that was born in the
old world?
No—a thousand times no! America in her
art—as in other things—is ready here to prove
her very bigness. If the real art must include
sincerity, individuality and reverence, will not
the true American sculptor remain loyal to that
sincerity and grace which the past has taught;
will not each true American artist, for himself,
dare to adopt in addition that individuality
preached by the new school, and will he not return
to his own shores for his inspiration, moulding—
with reverence—the traditions, ideals and hopes
of his own people, and out of this combination
produce an art which will be epoch making in the
history of sculpture? Just as America herself is
a fusion of peoples, must not her art be a fusion of
ideals? At no time before has the American sculp-
tor had a better opportunity to put these new
ideals into practice, and lest what we have said
seem pessimistic, let us say in closing that a close,
loving, patient view of the development of this
wonderful art in this country, during the past few
years, confirms the writer’s faith to an unshak-
able degree in this future for American sculpture.
A RCHITECTURAL PROGRESS
/\ BY H. T. LINDEBERG
No discussion of the progress that
architecture has made in America dur-
ing the last two decades would be complete with-