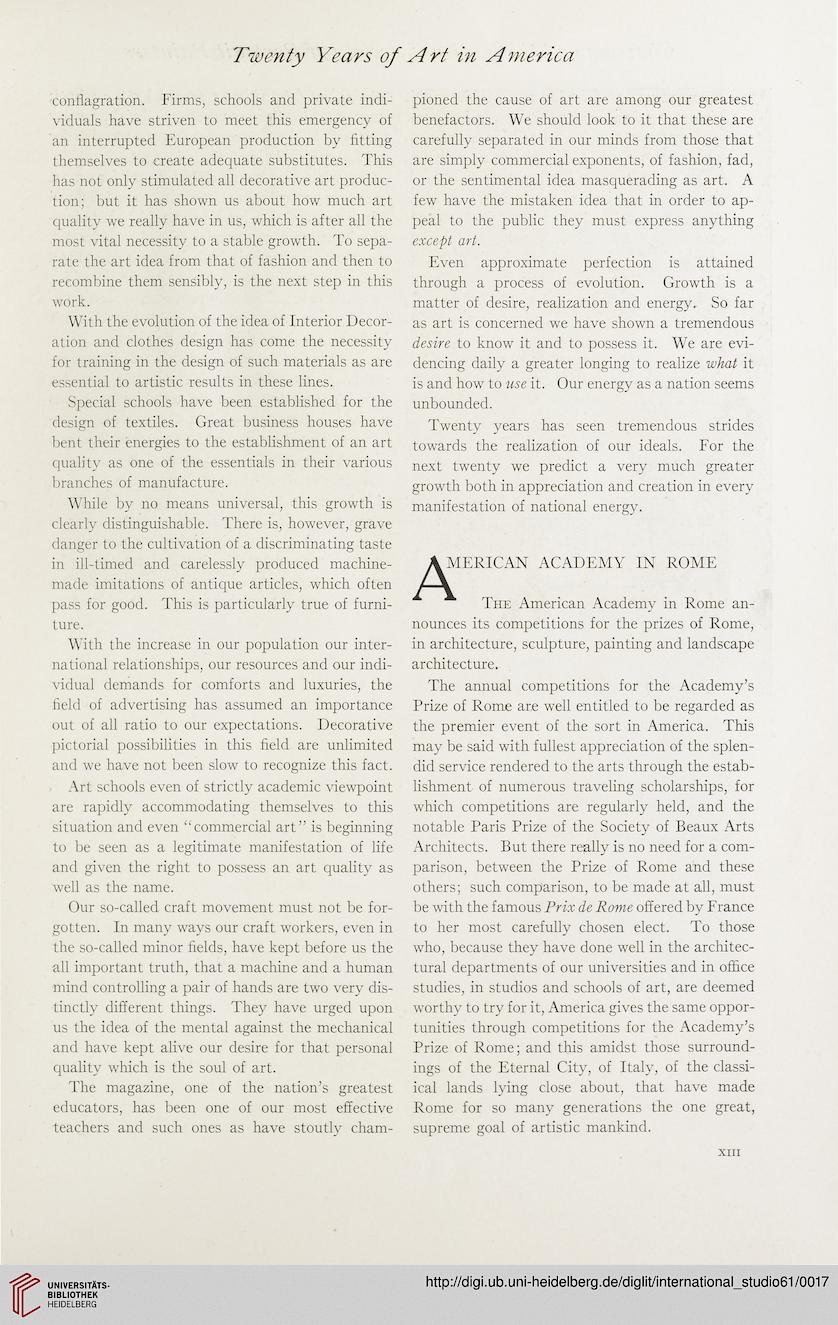 conflagration. Firms, schools and private indi-
viduals have striven to meet this emergency of
an interrupted European production by fitting
themselves to create adequate substitutes. This
has not only stimulated all decorative art produc-
tion; but it has shown us about how much art
quality we really have in us, which is after all the
most vital necessity to a stable growth. To sepa-
rate the art idea from that of fashion and then to
recombine them sensibly, is the next step in this
work.
With the evolution of the idea of Interior Decor-
ation and clothes design has come the necessity
for training in the design of such materials as are
essential to artistic results in these lines.
Special schools have been established for the
design of textiles. Great business houses have
bent their energies to the establishment of an art
quality as one of the essentials in their various
branches of manufacture.
While by no means universal, this growth is
clearly distinguishable. There is, however, grave
danger to the cultivation of a discriminating taste
in ill-timed and carelessly produced machine-
made imitations of antique articles, which often
pass for good. This is particularly true of furni-
ture.
With the increase in our population our inter-
national relationships, our resources and our indi-
vidual demands for comforts and luxuries, the
field of advertising has assumed an importance
out of all ratio to our expectations. Decorative
pictorial possibilities in this field are unlimited
and we have not been slow to recognize this fact.
Art schools even of strictly academic viewpoint
are rapidly accommodating themselves to this
situation and even “commercial art” is beginning
to be seen as a legitimate manifestation of life
and given the right to possess an art quality as
well as the name.
Our so-called craft movement must not be for-
gotten. In many ways our craft workers, even in
the so-called minor fields, have kept before us the
all important truth, that a machine and a human
mind controlling a pair of hands are two very dis-
tinctly different things. They have urged upon
us the idea of the mental against the mechanical
and have kept alive our desire for that personal
quality which is the soul of art.
The magazine, one of the nation’s greatest
educators, has been one of our most effective
teachers and such ones as have stoutly cham-

pioned the cause of art are among our greatest
benefactors. We should look to it that these are
carefully separated in our minds from those that
are simply commercial exponents, of fashion, fad,
or the sentimental idea masquerading as art. A
few have the mistaken idea that in order to ap-
peal to the public they must express anything
except art.
Even approximate perfection is attained
through a process of evolution. Growth is a
matter of desire, realization and energy. So far
as art is concerned we have shown a tremendous
desire to know it and to possess it. We are evi-
dencing daily a greater longing to realize what it
is and how to use it. Our energy as a nation seems
unbounded.
Twenty years has seen tremendous strides
towards the realization of our ideals. For the
next twenty we predict a very much greater
growth both in appreciation and creation in every
manifestation of national energy.
y^MERICAN ACADEMY IN ROME
The American Academy in Rome an-
nounces its competitions for the prizes of Rome,
in architecture, sculpture, painting and landscape
architecture.
The annual competitions for the Academy’s
Prize of Rome are well entitled to be regarded as
the premier event of the sort in America. This
may be said with fullest appreciation of the splen-
did service rendered to the arts through the estab-
lishment- of numerous traveling scholarships, for
which competitions are regularly held, and the
notable Paris Prize of the Society of Beaux Arts
Architects. But there really is no need for a com-
parison, between the Prize of Rome and these
others; such comparison, to be made at all, must
be with the famous Prix de Rome offered by France
to her most carefully chosen elect. To those
who, because they have done well in the architec-
tural departments of our universities and in office
studies, in studios and schools of art, are deemed
worthy to try for it, America gives the same oppor-
tunities through competitions for the Academy’s
Prize of Rome; and this amidst those surround-
ings of the Eternal City, of Italy, of the classi-
cal lands lying close about, that have made
Rome for so many generations the one great,
supreme goal of artistic mankind.