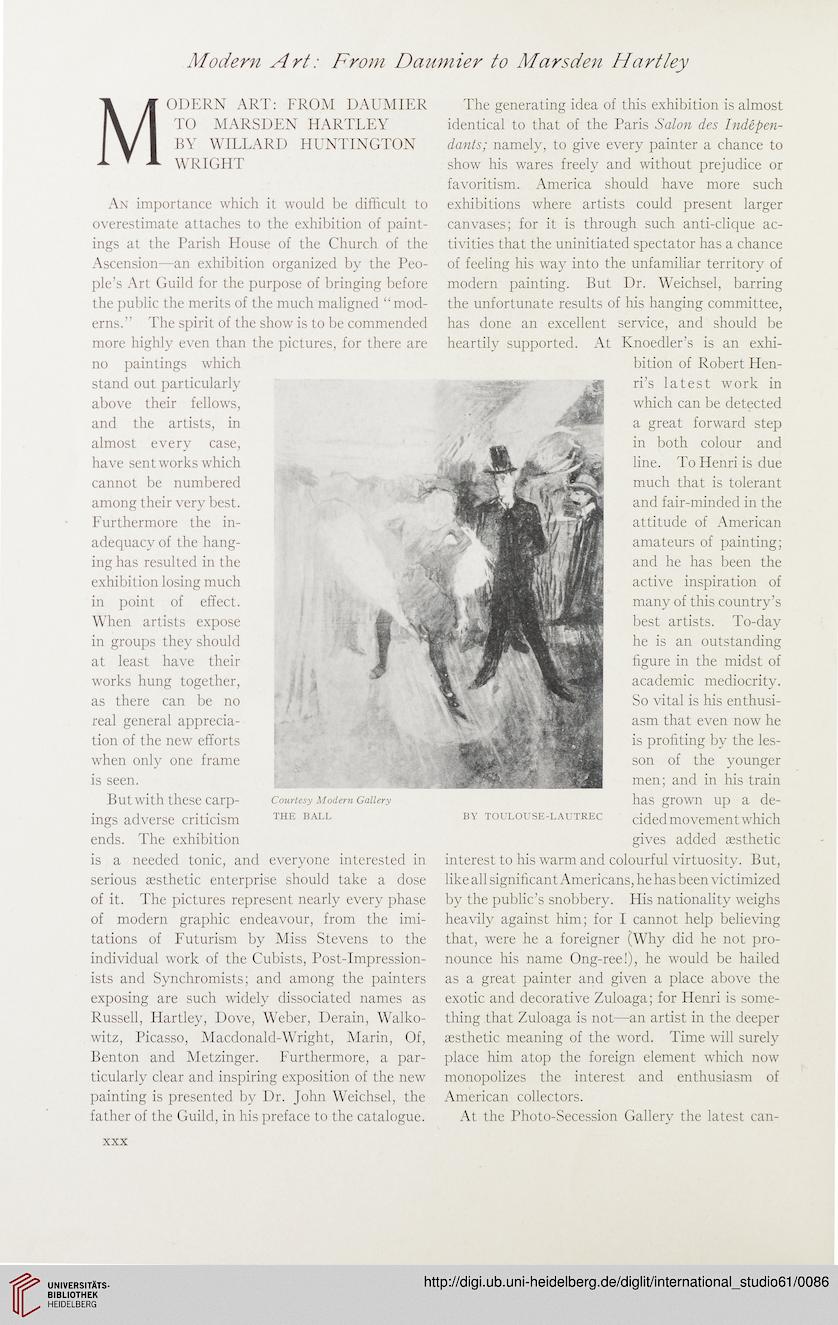 The generating idea of this exhibition is almost
identical to that of the Paris Salon des Indepen-
dants; namely, to give every painter a chance to
show his wares freely and without prejudice or
favoritism. America should have more such

An importance which it would be difficult to
overestimate attaches to the exhibition of paint-
ings at the Parish House of the Church of the
Ascension—an exhibition organized by the Peo-
ple’s Art Guild for the purpose of bringing before
the public the merits of the much maligned “mod-
erns.” The spirit of the show is to be commended
more highly even than the pictures, for there are

exhibitions where artists could present larger
canvases; for it is through such anti-clique ac-
tivities that the uninitiated spectator has a chance
of feeling his way into the unfamiliar territory of
modern painting. But Dr. Weichsel, barring
the unfortunate results of his hanging committee,
has done an excellent service, and should be
heartily supported. At Knoedler’s is an exhi-

no paintings which
stand out particularly
above their fellows,
and the artists, in
almost every case,
have sent works which
cannot be numbered
among their very best.
Furthermore the in-
adequacy of the hang-
ing has resulted in the
exhibition losing much
in point of effect.
When artists expose
in groups they should
at least have their
works hung together,
as there can be no
real general apprecia-
tion of the new efforts
when only one frame
is seen.
But with these carp-
ings adverse criticism
ends. The exhibition

bition of Robert Hen-
ri’s latest work in
which can be detected
a great forward step
in both colour and
line. To Henri is due
much that is tolerant
and fair-minded in the
attitude of American
amateurs of painting;
and he has been the
active inspiration of
many of this country’s
best artists. To-day
he is an outstanding
figure in the midst of
academic mediocrity.
So vital is his enthusi-
asm that even now he
is profiting by the les-
son of the younger
men; and in his train
has grown up a de-
cided movement which
gives added aesthetic

is a needed tonic, and

interest to his warm and colourful virtuosity. But,

serious aesthetic enterprise should take a dose
of it. The pictures represent nearly every phase
of modern graphic endeavour, from the imi-
tations of Futurism by Miss Stevens to the
individual work of the Cubists, Post-Impression-
ists and Synchromists; and among the painters
exposing are such widely dissociated names as
Russell, Hartley, Dove, Weber, Derain, Walko-
witz, Picasso, Macdonald-Wright, Marin, Of,
Benton and Metzinger. Furthermore, a par-
ticularly clear and inspiring exposition of the new
painting is presented by Dr. John Weichsel, the

like all significant Americans, he has been victimized
by the public’s snobbery. His nationality weighs
heavily against him; for I cannot help believing
that, were he a foreigner (Why did he not pro-
nounce his name Ong-ree!), he would be hailed
as a great painter and given a place above the
exotic and decorative Zuloaga; for Henri is some-
thing that Zuloaga is not—an artist in the deeper
aesthetic meaning of the word. Time will surely
place him atop the foreign element which now
monopolizes the interest and enthusiasm of
American collectors.

father of the Guild, in his preface to the catalogue.

At the Photo-Secession Gallery the latest can-