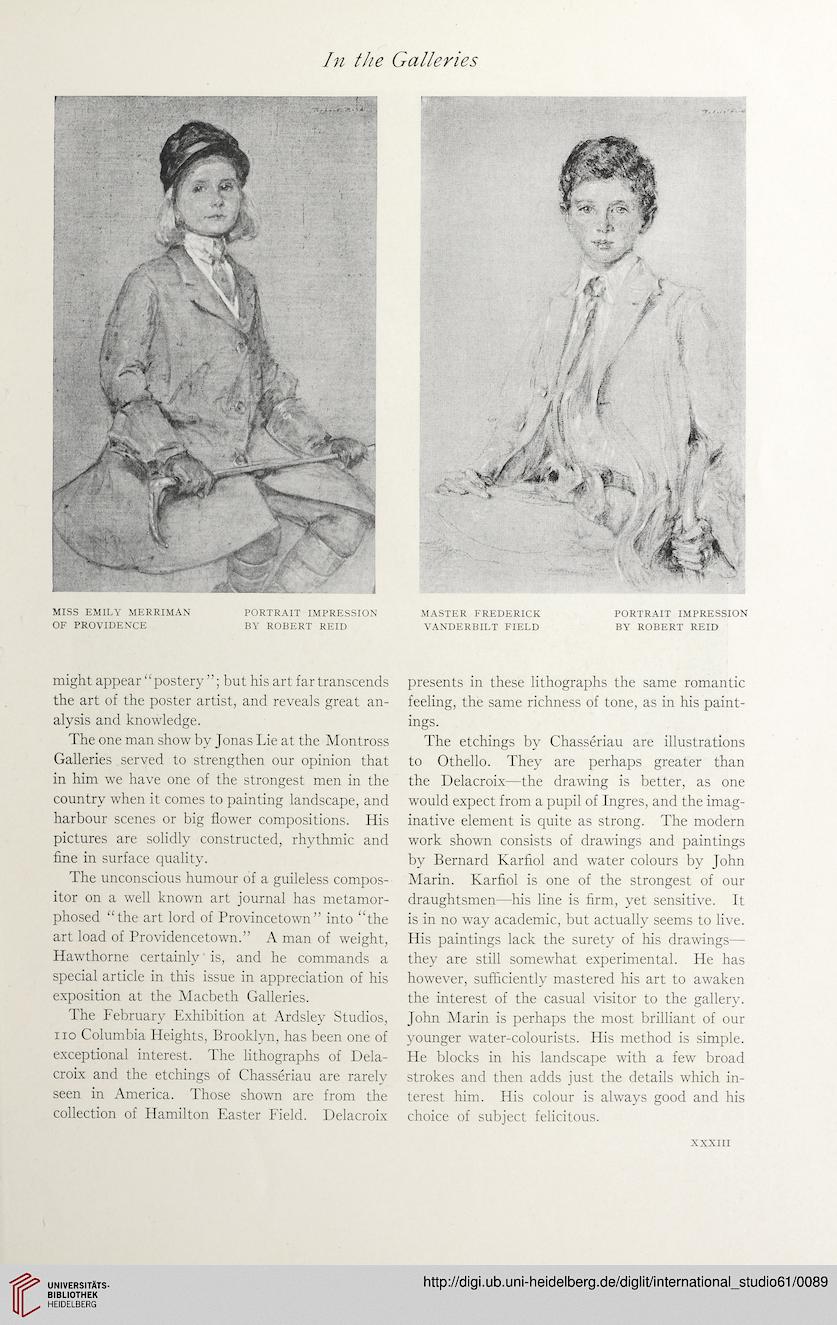 might appear “postery but his art far transcends
the art of the poster artist, and reveals great an-
alysis and knowledge.
The one man show by Jonas Lie at the Montross
Galleries served to strengthen our opinion that
in him we have one of the strongest men in the
country when it comes to painting landscape, and
harbour scenes or big flower compositions. His
pictures are solidly constructed, rhythmic and
fine in surface quality.
The unconscious humour of a guileless compos-
itor on a well known art journal has metamor-
phosed “the art lord of Provincetown” into “the
art load of Providencetown.” A man of weight,
Hawthorne certainly is, and he commands a
special article in this issue in appreciation of his
exposition at the Macbeth Galleries.
The February Exhibition at Ardsley Studios,
no Columbia Heights, Brooklyn, has been one of
exceptional interest. The lithographs of Dela-
croix and the etchings of Chasseriau are rarely
seen in America. Those shown are from the
collection of Hamilton Easter Field. Delacroix

presents in these lithographs the same romantic
feeling, the same richness of tone, as in his paint-
ings.
The etchings by Chasseriau are illustrations
to Othello. They are perhaps greater than
the Delacroix—the drawing is better, as one
would expect from a pupil of Ingres, and the imag-
inative element is quite as strong. The modern
work shown consists of drawings and paintings
by Bernard Karfiol and water colours by John
Marin. Karfiol is one of the strongest of our
draughtsmen—his line is firm, yet sensitive. It
is in no way academic, but actually seems to live.
His paintings lack the surety of his drawings—
they are still somewhat experimental. He has
however, sufficiently mastered his art to awaken
the interest of the casual visitor to the gallery.
John Marin is perhaps the most brilliant of our
younger water-colourists. His method is simple.
He blocks in his landscape with a few broad
strokes and then adds just the details which in-
terest him. His colour is always good and his
choice of subject felicitous.