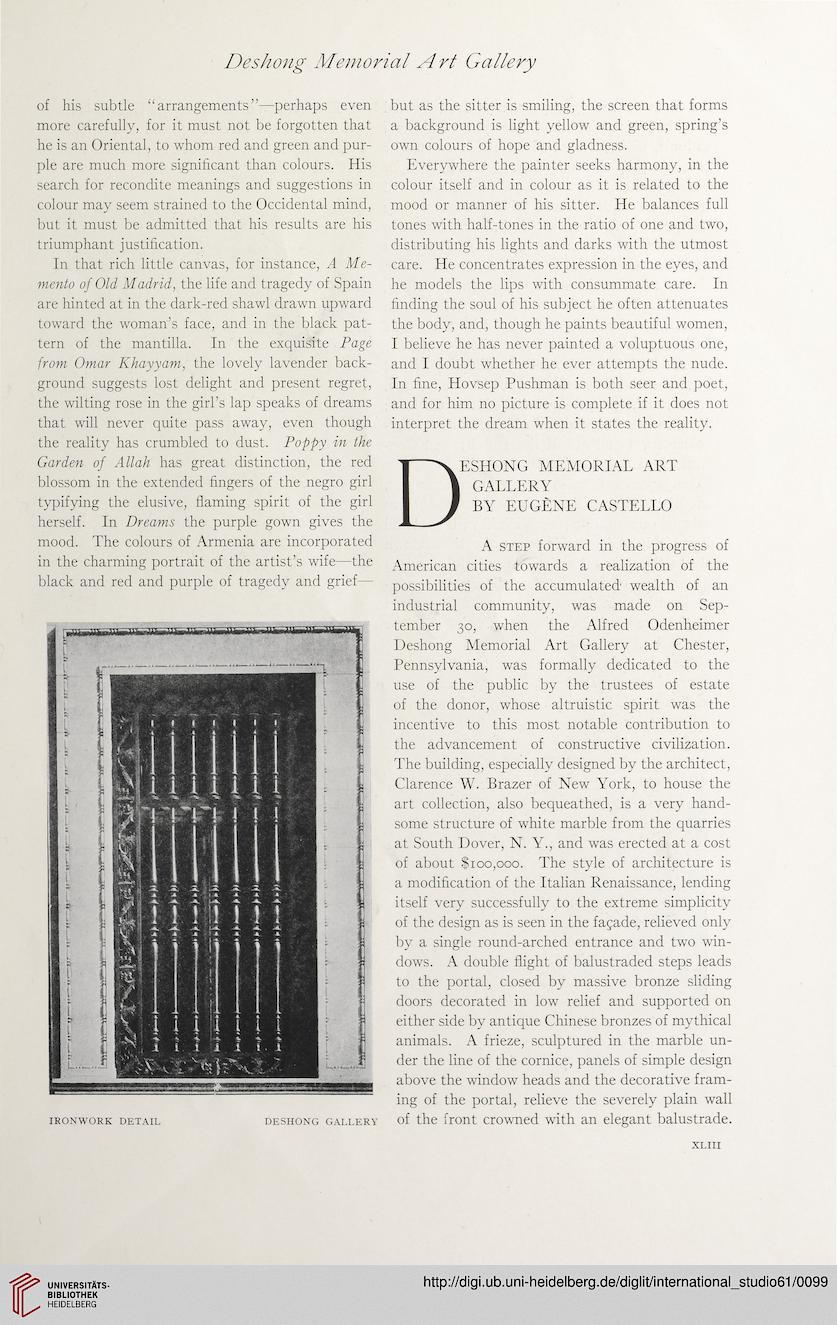 of his subtle “arrangements”—perhaps even
more carefully, for it must not be forgotten that
he is an Oriental, to whom red and green and pur-
ple are much more significant than colours. His
search for recondite meanings and suggestions in
colour may seem strained to the Occidental mind,
but it must be admitted that his results are his
triumphant justification.
In that rich little canvas, for instance, A Me-
mento of Old Madrid, the life and tragedy of Spain
are hinted at in the dark-red shawl drawn upward
toward the woman’s face, and in the black pat-
tern of the mantilla. In the exquisite Page
from Omar Khayyam, the lovely lavender back-
ground suggests lost delight and present regret,
the wilting rose in the girl’s lap speaks of dreams
that will never quite pass away, even though
the reality has crumbled to dust. Poppy in the
Garden of Allah has great distinction, the red
blossom in the extended fingers of the negro girl
typifying the elusive, flaming spirit of the girl
herself. In Dreams the purple gown gives the
mood. The colours of Armenia are incorporated
in the charming portrait of the artist’s wife—the
black and red and purple of tragedy and grief—

but as the sitter is smiling, the screen that forms
a background is light yellow and green, spring’s
own colours of hope and gladness.
Everywhere the painter seeks harmony, in the
colour itself and in colour as it is related to the
mood or manner of his sitter. He balances full
tones with half-tones in the ratio of one and two,
distributing his lights and darks with the utmost
care. He concentrates expression in the eyes, and
he models the lips with consummate care. In
finding the soul of his subject he often attenuates
the body, and, though he paints beautiful women,
I believe he has never painted a voluptuous one,
and I doubt whether he ever attempts the nude.
In fine, Hovsep Pushman is both seer and poet,
and for him no picture is complete if it does not
interpret the dream when it states the reality.
Deshong memorial art
GALLERY
BY EUGENE CASTELLO
A step forward in the progress of
American cities towards a realization of the
possibilities of the accumulated wealth of an
industrial community, was made on Sep-
tember 30, when the Alfred Odenheimer
Deshong Memorial Art Gallery at Chester,
Pennsylvania, was formally dedicated to the
use of the public by the trustees of estate
of the donor, whose altruistic spirit was the
incentive to this most notable contribution to
the advancement of constructive civilization.
The building, especially designed by the architect,
Clarence W. Brazer of New York, to house the
art collection, also bequeathed, is a very hand-
some structure of white marble from the quarries
at South Dover, N. Y., and was erected at a cost
of about $100,000. The style of architecture is
a modification of the Italian Renaissance, lending
itself very successfully to the extreme simplicity
of the design as is seen in the facade, relieved only
by a single round-arched entrance and two win-
dows. A double flight of balustraded steps leads
to the portal, closed by massive bronze sliding
doors decorated in low relief and supported on
either side by antique Chinese bronzes of mythical
animals. A frieze, sculptured in the marble un-
der the line of the cornice, panels of simple design
above the window heads and the decorative fram-
ing of the portal, relieve the severely plain wall
of the front crowned with an elegant balustrade.