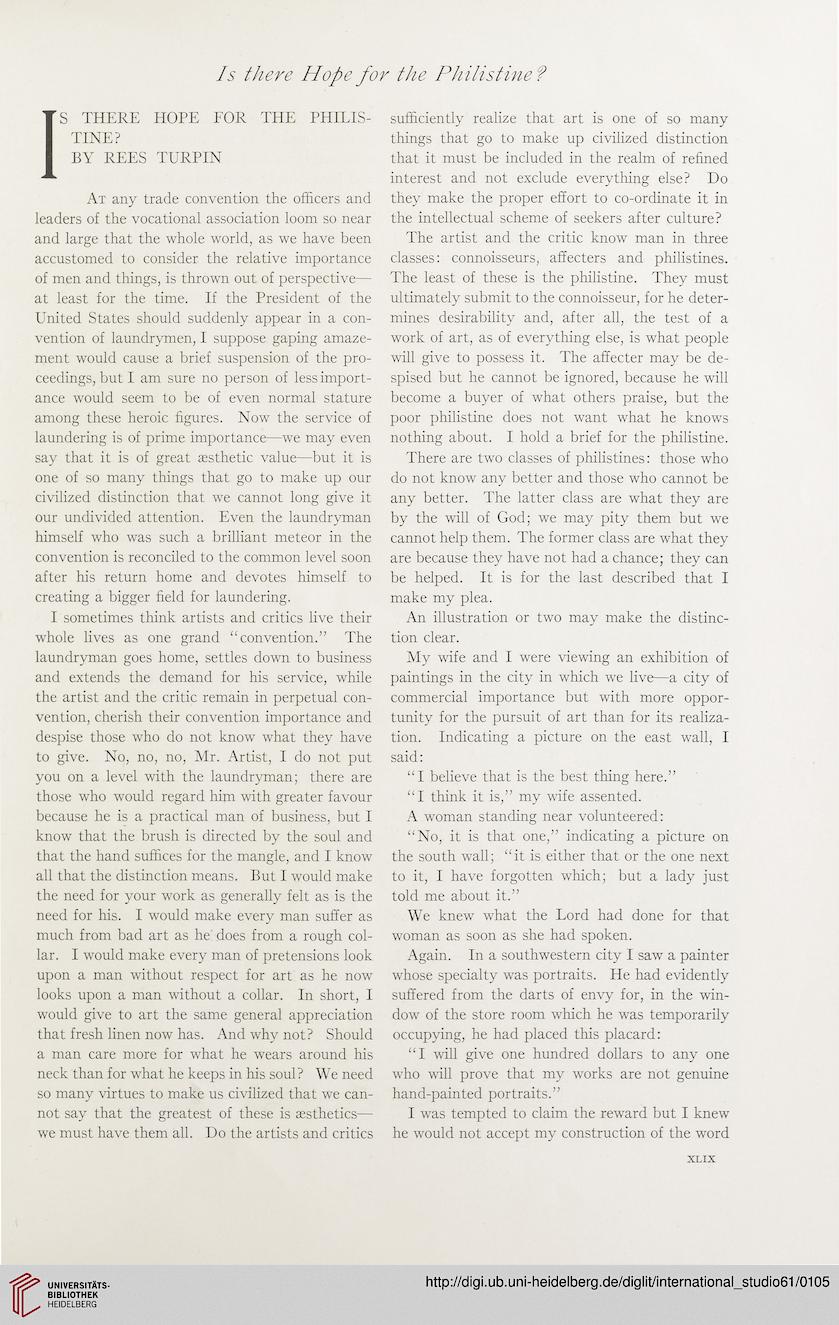 Information about OCR text
Is there Hope for the Philistine ?

IS THERE HOPE FOR THE PHILIS-
TINE?
BY REES TURPIN
At any trade convention the officers and
leaders of the vocational association loom so near
and large that the whole world, as we have been
accustomed to consider the relative importance
of men and things, is thrown out of perspective—
at least for the time. If the President of the
United States should suddenly appear in a con-
vention of laundrymen, I suppose gaping amaze-
ment would cause a brief suspension of the pro-
ceedings, but I am sure no person of less import-
ance would seem to be of even normal stature
among these heroic figures. Now the service of
laundering is of prime importance—we may even
say that it is of great aesthetic value—but it is
one of so many things that go to make up our
civilized distinction that we cannot long give it
our undivided attention. Even the laundryman
himself who was such a brilliant meteor in the
convention is reconciled to the common level soon
after his return home and devotes himself to
creating a bigger field for laundering.
I sometimes think artists and critics live their
whole lives as one grand “convention.” The
laundryman goes home, settles down to business
and extends the demand for his service, while
the artist and the critic remain in perpetual con-
vention, cherish their convention importance and
despise those who do not know what they have
to give. No, no, no, Mr. Artist, I do not put
you on a level with the laundryman; there are
those who would regard him with greater favour
because he is a practical man of business, but I
know that the brush is directed by the soul and
that the hand suffices for the mangle, and I know
all that the distinction means. But I would make
the need for your work as generally felt as is the
need for his. I would make every man suffer as
much from bad art as he does from a rough col-
lar. I would make every man of pretensions look
upon a man without respect for art as he now
looks upon a man without a collar. In short, I
would give to art the same general appreciation
that fresh linen now has. And why not? Should
a man care more for what he wears around his
neck than for what he keeps in his soul? We need
so many virtues to make us civilized that we can-
not say that the greatest of these is aesthetics—
we must have them all. Do the artists and critics

sufficiently realize that art is one of so many
things that go to make up civilized distinction
that it must be included in the realm of refined
interest and not exclude everything else? Do
they make the proper effort to co-ordinate it in
the intellectual scheme of seekers after culture?
The artist and the critic know man in three
classes: connoisseurs, affecters and philistines.
The least of these is the philistine. They must
ultimately submit to the connoisseur, for he deter-
mines desirability and, after all, the test of a
work of art, as of everything else, is what people
will give to possess it. The affecter may be de-
spised but he cannot be ignored, because he will
become a buyer of what others praise, but the
poor philistine does not want what he knows
nothing about. I hold a brief for the philistine.
There are two classes of philistines: those who
do not know any better and those who cannot be
any better. The latter class are what they are
by the will of God; we may pity them but we
cannot help them. The former class are what they
are because they have not had a chance; they can
be helped. It is for the last described that I
make my plea.
An illustration or two may make the distinc-
tion clear.
My wife and I were viewing an exhibition of
paintings in the city in which we live—a city of
commercial importance but with more oppor-
tunity for the pursuit of art than for its realiza-
tion. Indicating a picture on the east wall, I
said:
“I believe that is the best thing here.”
“I think it is,” my wife assented.
A woman standing near volunteered:
“No, it is that one,” indicating a picture on
the south wall; “it is either that or the one next
to it, I have forgotten which; but a lady just
told me about it.”
We knew what the Lord had done for that
woman as soon as she had spoken.
Again. In a southwestern city I saw a painter
whose specialty was portraits. He had evidently
suffered from the darts of envy for, in the win-
dow of the store room which he was temporarily
occupying, he had placed this placard:
“I will give one hundred dollars to any one
who will prove that my works are not genuine
hand-painted portraits.”
I was tempted to claim the reward but I knew
he would not accept my construction of the word