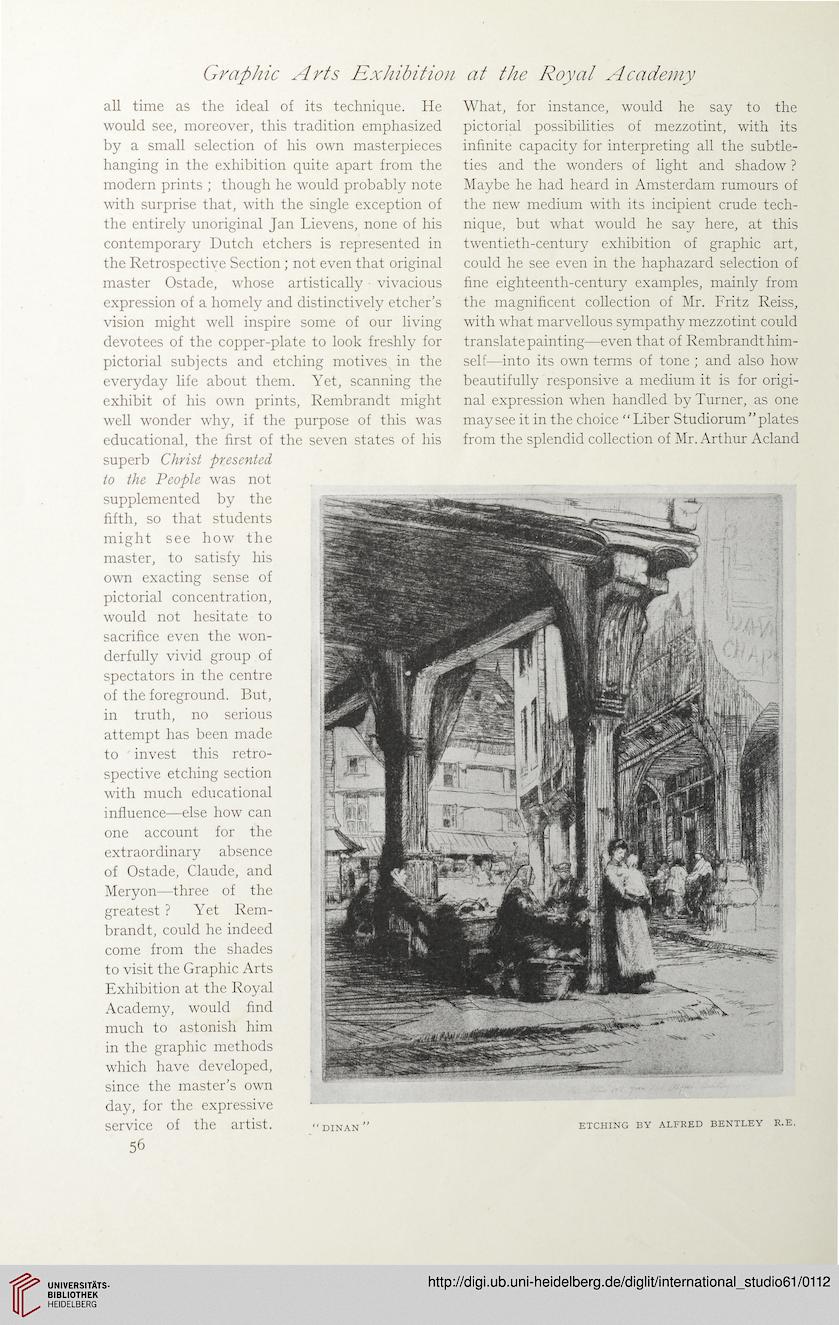 all time as the ideal of its technique. He
would see, moreover, this tradition emphasized
by a small selection of his own masterpieces
hanging in the exhibition quite apart from the
modern prints ; though he would probably note
with surprise that, with the single exception of
the entirely unoriginal Jan Lievens, none of his
contemporary Dutch etchers is represented in
the Retrospective Section ; not even that original
master Ostade, whose artistically ■ vivacious
expression of a homely and distinctively etcher’s
vision might well inspire some of our living
devotees of the copper-plate to look freshly for
pictorial subjects and etching motives in the
everyday life about them. Yet, scanning the
exhibit of his own prints, Rembrandt might
well wonder why, if the purpose of this was
educational, the first of the
superb Christ presented,
to the People was not
supplemented by the
fifth, so that students
might see how the
master, to satisfy his
own exacting sense of
pictorial concentration,
would not hesitate to
sacrifice even the won-
derfully vivid group of
spectators in the centre
of the foreground. But,
in truth, no serious
attempt has been made
to invest this retro-
spective etching section
with much educational
influence—else how can
one account for the
extraordinary absence
of Ostade, Claude, and
Meryon—three of the
greatest ? Yet Rem-
brandt, could he indeed
come from the shades
to visit the Graphic Arts
Exhibition at the Royal
Academy, would find
much to astonish him
in the graphic methods
which have developed,
since the master’s own
day, for the expressive
service of the artist.
56

What, for instance, would he say to the
pictorial possibilities of mezzotint, with its
infinite capacity for interpreting all the subtle-
ties and the wonders of light and shadow ?
Maybe he had heard in Amsterdam rumours of
the new medium with its incipient crude tech-
nique, but what would he say here, at this
twentieth-century exhibition of graphic art,
could he see even in the haphazard selection of
fine eighteenth-century examples, mainly from
the magnificent collection of Mr. Fritz Reiss,
with what marvellous sympathy mezzotint could
translate painting—even that of Rembrandt him-
self—into its own terms of tone ; and also how
beautifully responsive a medium it is for origi-
nal expression when handled by Turner, as one
may see it in the choice “ Liber Studiorum ” plates
from the splendid collection of Mr. Arthur Acland