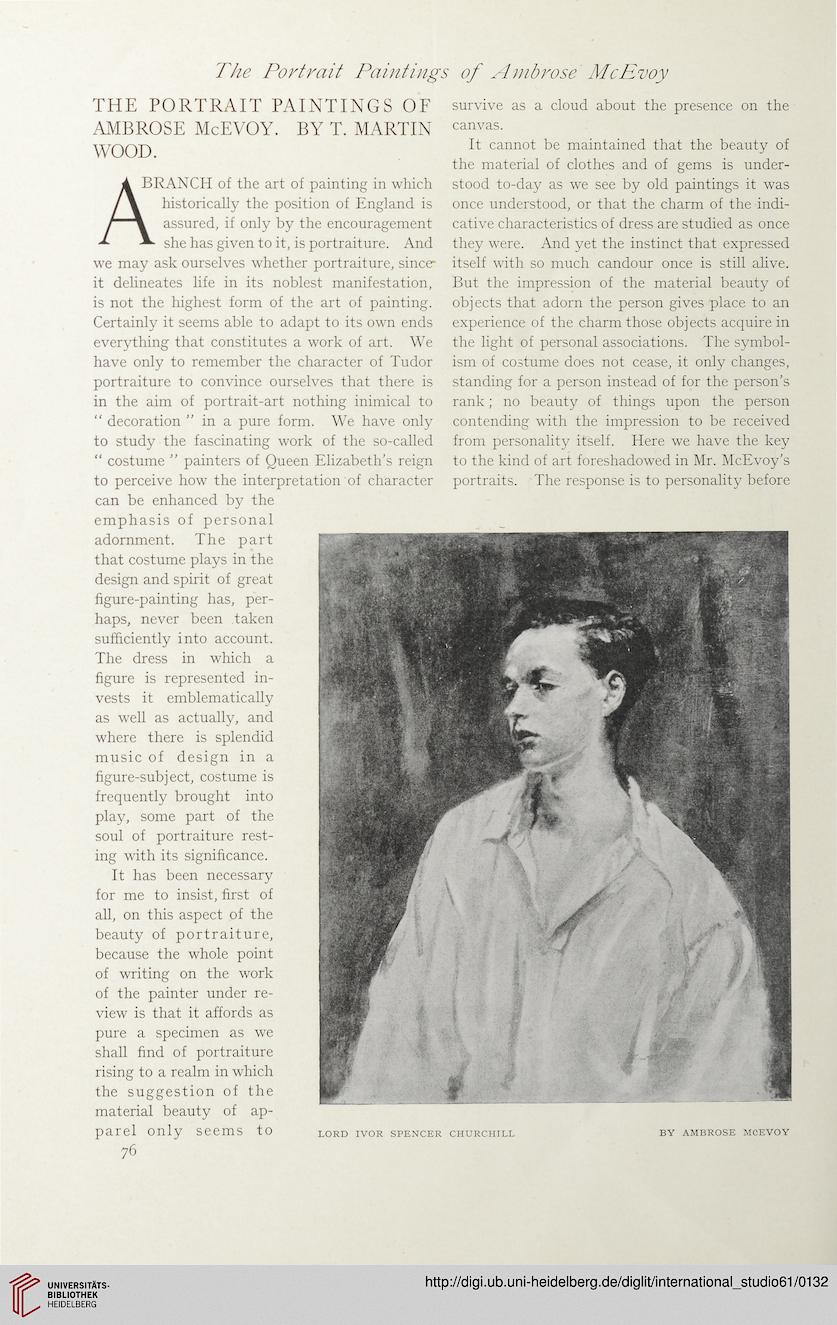 Information about OCR text
The Portrait Paintings of Ambrose McEvoy

THE PORTRAIT PAINTINGS OF
AMBROSE McEVOY. BY T. MARTIN
WOOD.
4 BRANCH of the art of painting in which
/\ historically the position of England is
/ A assured, if only by the encouragement
A. she has given to it, is portraiture. And
we may ask ourselves whether portraiture, sincer
it delineates life in its noblest manifestation,
is not the highest form of the art of painting.
Certainly it seems able to adapt to its own ends
everything that constitutes a work of art. We
have only to remember the character of Tudor
portraiture to convince ourselves that there is
in the aim of portrait-art nothing inimical to
“ decoration ” in a pure form. We have only
to study the fascinating work of the so-called
“ costume ” painters of Queen Elizabeth’s reign
to perceive how the interpretation of character
can be enhanced by the
emphasis of personal
adornment. The part
that costume plays in the
design and spirit of great
figure-painting has, per-
haps, never been taken
sufficiently into account.
The dress in which a
figure is represented in-
vests it emblematically
as well as actually, and
where there is splendid
music of design in a
figure-subject, costume is
frequently brought into
play, some part of the
soul of portraiture rest-
ing with its significance.
It has been necessary
for me to insist, first of
all, on this aspect of the
beauty of portraiture,
because the whole point
of writing on the work
of the painter under re-
view is that it affords as
pure a specimen as we
shall find of portraiture
rising to a realm in which
the suggestion of the
material beauty of ap-
parel only seems to
76

survive as a cloud about the presence on the
canvas.
It cannot be maintained that the beauty of
the material of clothes and of gems is under-
stood to-day as we see by old paintings it was
once understood, or that the charm of the indi-
cative characteristics of dress are studied as once
they were. And yet the instinct that expressed
itself with so much candour once is still alive.
But the impression of the material beauty of
objects that adorn the person gives place to an
experience of the charm those objects acquire in
the light of personal associations. The symbol-
ism of costume does not cease, it only changes,
standing for a person instead of for the person’s
rank; no beauty of things upon the person
contending with the impression to be received
from personality itself. Here we have the key
to the kind of art foreshadowed in Mr. McEvoy’s
portraits. The response is to personality before