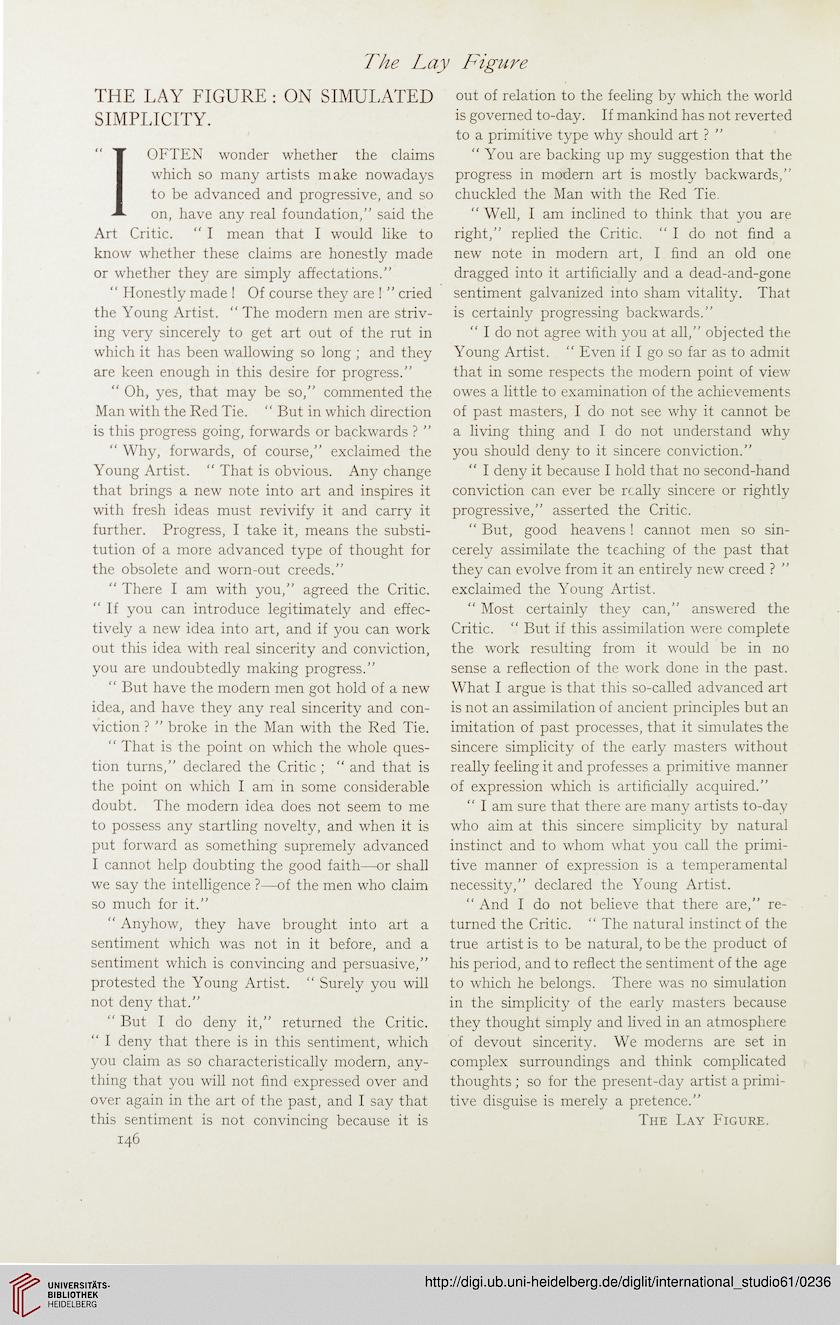 THE LAY FIGURE : ON SIMULATED
SIMPLICITY.
I OFTEN wonder whether the claims
which so many artists make nowadays
to be advanced and progressive, and so
on, have any real foundation," said the
Art Critic. “ I mean that I would like to
know whether these claims are honestly made
or whether they are simply affectations."
“ Honestly made ! Of course they are ! ” cried
the Young Artist. “ The modern men are striv-
ing very sincerely to get art out of the rut in
which it has been wallowing so long ; and they
are keen enough in this desire for progress."
“ Oh, yes, that may be so,” commented the
Man with the Red Tie. “ But in which direction
is this progress going, forwards or backwards ? "
“ Why, forwards, of course," exclaimed the
Young Artist. " That is obvious. Any change
that brings a new note into art and inspires it
with fresh ideas must revivify it and carry it
further. Progress, I take it, means the substi-
tution of a more advanced type of thought for
the obsolete and worn-out creeds."
“ There I am with you," agreed the Critic.
“ If you can introduce legitimately and effec-
tively a new idea into art, and if you can work
out this idea with real sincerity and conviction,
you are undoubtedly making progress.”
“ But have the modern men got hold of a new
idea, and have they any real sincerity and con-
viction ? " broke in the Man with the Red Tie.
" That is the point on which the whole ques-
tion turns," declared the Critic ; “ and that is
the point on which I am in some considerable
doubt. The modern idea does not seem to me
to possess any startling novelty, and when it is
put forward as something supremely advanced
I cannot help doubting the good faith—or shall
we say the intelligence ?—of the men who claim
so much for it."
“ Anyhow, they have brought into art a
sentiment which was not in it before, and a
sentiment which is convincing and persuasive,"
protested the Young Artist. “ Surely you will
not deny that."
“ But I do deny it,” returned the Critic.
“ I deny that there is in this sentiment, which
you claim as so characteristically modern, any-
thing that you will not find expressed over and
over again in the art of the past, and I say that
this sentiment is not convincing because it is
146

out of relation to the feeling by which the world
is governed to-day. If mankind has not reverted
to a primitive type why should art ? ”
" You are backing up my suggestion that the
progress in modem art is mostly backwards,"
chuckled the Man with the Red Tie.
“ Well, I am inclined to think that you are
right," replied the Critic. “ I do not find a
new note in modern art, I find an old one
dragged into it artificially and a dead-and-gone
sentiment galvanized into sham vitality. That
is certainly progressing backwards."
“ I do not agree with you at all," objected the
Young Artist. “ Even if I go so far as to admit
that in some respects the modern point of view
owes a little to examination of the achievements
of past masters, I do not see why it cannot be
a living thing and I do not understand why
you should deny to it sincere conviction."
“ I deny it because I hold that no second-hand
conviction can ever be really sincere or rightly
progressive,” asserted the Critic.
“ But, good heavens! cannot men so sin-
cerely assimilate the teaching of the past that
they can evolve from it an entirely new creed ? "
exclaimed the Young Artist.
“ Most certainly they can,” answered the
Critic. “ But if this assimilation were complete
the work resulting from it would be in no
sense a reflection of the work done in the past.
What I argue is that this so-called advanced art
is not an assimilation of ancient principles but an
imitation of past processes, that it simulates the
sincere simplicity of the early masters without
really feeling it and professes a primitive manner
of expression which is artificially acquired.”
" I am sure that there are many artists to-day
who aim at this sincere simplicity by natural
instinct and to whom what you call the primi-
tive manner of expression is a temperamental
necessity," declared the Young Artist.
“ And I do not believe that there are,” re-
turned the Critic. “ The natural instinct of the
true artist is to be natural, to be the product of
his period, and to reflect the sentiment of the age
to which he belongs. There was no simulation
in the simplicity of the early masters because
they thought simply and lived in an atmosphere
of devout sincerity. We moderns are set in
complex surroundings and think complicated
thoughts ; so for the present-day artist a primi-
tive disguise is merely a pretence.”
The Lay Figure.